According to the most recent data from UNAIDS in 2010, there are about three million people living with HIV inIndia, accounting for almost 50 per cent of the HIV-infected population inAsia. Although these numbers are declining, there is an urgent need to identify and segment high-risk groups and sub-groups within them that cause the virus to spread to the general population. Many studies have identified migrants as a high-risk group, with research showing internal migration as a co-factor for accelerating HIV prevalence. Although this fact is widely acknowledged, migrants’ behaviour is often under-researched.

Identifying the determinants of migrant HIV risk is essential for planning preventive measures as part of a broader public health policy. To this end, migrants should be viewed as a heterogeneous group since within-group differences and characteristics could be important in predicting HIV vulnerability. Farah Seedat’s recent study, “Determinants of HIV Risk among Male Migrant Workers in Mumbai”, is an important contribution in this regard. Her study identifies risky sub-groups within male migrant groups in Mumbai who are most vulnerable to HIV owing to their knowledge levels, risky sexual behaviour (RSB), and sexually transmitted infections (STI). She also analyses the effect that HIV knowledge and awareness has on RSB and STI. Sub-groups are identified and distinguished through socioeconomic and demographic characteristics such as income, age, occupation, education, and marital status.

Seedat establishes the case for analysing risk determinants amongst Mumbai migrants: as the financial hub ofIndia, Mumbai is a popular destination for Indian migrants seeking employment opportunities—the number of migrants to the city increases every year. Moreover, in Mumbai, rates of HIV prevalence amongst migrants are higher than the national average. The rationale for increased prevalence amongst male migrants is straightforward: the majority of male migrants are within their sexually active age, travelling without wives or regular partners and families, and living and working in poor conditions. Predominantly male settings do not help as the tendency to undertake RSB with commercial sex workers or casual partners rises.

To tease out the major risk determinants among male migrant sub-groups in Mumbai, Seedat analyses data collected from interviews with 605 male migrants (aged 18 and above) with the help of the Population Council and the Tata Institute of Social Science. The interviews focused on socioeconomic and demographic variables of income, age, occupation, education, and marital status that determine level of HIV knowledge, RSB, and STI. The effects of RSB on STI, and of HIV knowledge on RSB and STI were also tested. The socioeconomic and demographic data reveal that those who are younger, single, less educated, and earning more exhibit higher HIV risk.

The level of HIV knowledge of participants was tested through three relevant questions in the interview. This information was used to establish the effect of knowledge on RSB and STI. The findings were contrary to the general hypothesis: while we may assume that increased knowledge of HIV would be accompanied by decreased HIV vulnerability, those migrants with higher knowledge were significantly more vulnerable. Those who were older than 24 years, more educated, and married, reported higher knowledge. The reason for the contradictive result from the hypothesis was that knowledge amongst the more knowledgeable was incomplete, replete with myths and misconceptions about sources of transmission that explained continued vulnerability. Seedat suggests that incomplete information drives down the motivation to engage in preventative measures and thus boosts vulnerability.

For the effect of RSB, results were in line with the hypothesis: single men and those with higher incomes reported higher likelihoods of RSB. Higher incomes signal higher social interaction, where wealth increases the number of opportunities for partnerships. However, the relationship between RSB and age, occupation, and education could not be strongly determined. As for STI, socioeconomic and demographic factors such as age, income, and occupation were strong determinants of vulnerability within sub-groups. Men below the age of 24, daily wage labourers, construction workers, and single men were particularly vulnerable to STI.

Seedat’s findings raise many policy implications for high-risk migrant groups – specifically male migrant sub-groups – in Mumbai, and could possibly be scaled up to the national level. The most surprising finding is the absence of an inverse relationship between knowledge and HIV risk. It appears that higher but incomplete knowledge is worse than lower or moderate levels of knowledge. The main source of HIV information for this group comes from the radio, which may not necessarily be detailed or sufficient for migrants to develop a deep understanding of HIV/AIDS. Targeted interventions commissioned to NGOs in order to seek out and educate migrant groups may need to employ more creative policies to reach the groups in a way that improves the quality of the information being provided.

Furthermore, social stigma and discrimination seem to be disincentives for treatment-seeking migrants. Shorter waiting times and easier access to STI clinics could help reduce reluctant behaviour amongst migrants, particularly if these improvements are targeted at those migrant sub-groups – youth, single, less-educated, wage labourers – who are more vulnerable. Early intervention, increasing knowledge, and condom use may also help these groups as would initiatives that enable such migrants to make better decisions on how to spend their incomes.

Farah Seedat completed a Master’s degree in International Health Policy at LSE in 2010.

Hemal Shah is a public policy researcher at the Legatum Institute, a London-based think tank. She completed her Masters in Development Studies from LSE in 2010 and tweets at @hemalshah_7. 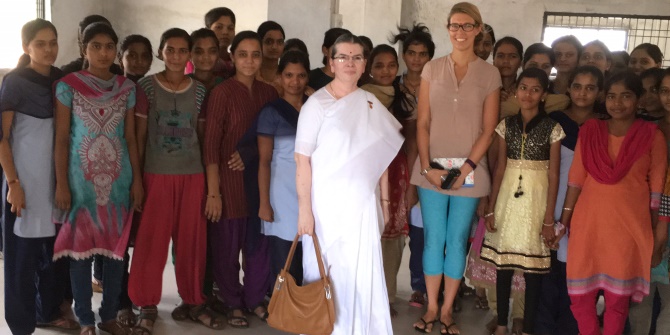