Professor Sumantra Bose introduces his new book, “Transforming India: Challenges to the World’s Largest Democracy”, which charts the ongoing transformation since the 1990s of India’s politics through the emergence of powerful regional political actors, and discusses the as yet unrealised transformations needed to cope with the contemporary challenges of Maoist insurgency and the Kashmir question. “Transforming India” has just been published, globally by Harvard University Press and in South Asia by Picador India.

Launch events for “Transforming India” are being held this week at Chatham House (October 16) and the London School of Economics (October 17).

In his new book, “Transforming India: Challenges to the World’s Largest Democracy”, Professor Sumantra Bose tells the story of the political odyssey of the world’s most populous and diverse democracy. He emphasises how the trajectory of India’s democracy has been shaped not only by elite politics but by popular struggles—demands and aspirations raised and waged from ‘below’ by ordinary people. In this context, Bose highlights the regionalisation of India’s polity and politics – that is, the emergence of a plethora of political parties representing particular communitarian identities and interests and each based in one state of the Indian Union – particularly since the ninth national election of November 1989. 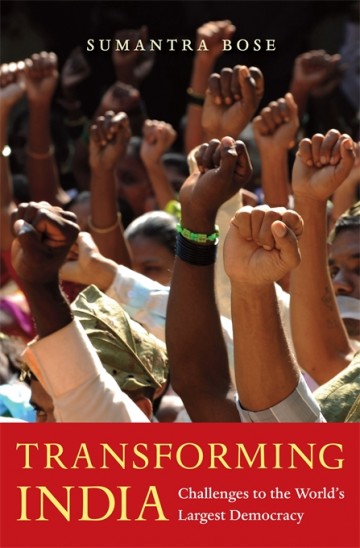 In this interview, Professor Bose discusses the trend of regionalisation, looks ahead to the regionalised dynamics of India’s 2014 national elections, and finds that Indian democracy is still in the making—a “work in progress”.

Q. In “Transforming India” you describe regionalisation as a democratic outcome. But given India’s interregional disparities, could regionalisation lead to fragmentation?

A. Regionalisation comes with complications and challenges of its own, but it’s a reality India has to deal with. Neither of the country’s two largest parties – the Congress and the BJP – is a national party in the sense of commanding an India-wide base, and it’s probable that they will have well under half of the 543 Lok Sabha seats between them following the election of April-May 2014.

In this context, three questions can be asked about the regional parties and their leaders. First, can the regionalists meet the expectations of their own constituencies? The most popular regional leaders – figures as diverse as Bihar’s Nitish Kumar, Gujarat’s Narendra Modi, West Bengal’s Mamata Banerjee, Tamil Nadu’s J. Jayalalitha and Odisha’s Naveen Patnaik – have come to realise that their political prospects depend on good governance and delivery of development and services. To retain their popularity, they need to deliver forward-looking and competent governance in their states. Second, can the regionalists take a national perspective when it is needed; for example, on issues of foreign policy and structural economic reforms? Third, are regional actors capable of concertacion? This political term, familiar in Spanish-speaking countries, can be idiomatically translated as the skill of pact-making between different segments of the political class. India needs effective concertacion so that some semblance of a coherent and cohesive national government – a truly federal government to reflect the bottom-up federalisation of the country’s polity and politics – can come together from the disparate forces that have been thrown up from the states.

Q. Gujarat Chief Minister Narendra Modi was recently nominated as BJP’s prime ministerial candidate for the 2014 elections. Does this choice reflect the regionalisation of Indian politics that you describe in “Transforming India”?

A. Modi’s rise indeed represents the regionalisation of India’s politics. His credentials are as Gujarat’s kingpin, where he has won three successive elections. In the book, I explain that the dynamic of regionalisation is so strong that even one of the two ‘national’ parties – the BJP – has seen a regionalist evolution. The states where the BJP is on a strong footing are precisely those states where they have credible regional, state-based leaders. Modi is not the only example—there’s Shivraj Chouhan, chief minister of Madhya Pradesh for the past eight years, and Raman Singh, chief minister of Chhattisgarh since 2003.

What is far from clear is whether Modi’s established credentials as a successful regional politician in a mid-sized state will expand into a nationwide surge for him in the coming months. My sense is that this won’t happen. Indian politics in the era of regionalisation is so complicated and fractured that I doubt Modi will emerge as the nationwide leader that his supporters hope he will. The idea of a single, commanding nationwide leader – as Indira Gandhi was for several years in the 1970s – has become obsolete in the era of regionalisation. The search for a nationwide ‘saviour’ figure is a red herring; the outcome of the 2014 election will largely be determined by complicated dynamics at the level of the states.

A. Early regional actors came up as challenges to single-party (Congress) hegemony. In a way, the first significant regionalist leader of the post-1947 Indian Union was Sheikh Abdullah of Kashmir. He had a well-knit political party and a mass base in the Kashmir Valley, and he thought he could deal with Delhi on an equal footing. He was deposed by Delhi in 1953 through undemocratic methods. In the 1960s the DMK party came into its own in Tamil Nadu, and regionalist communists became a force in West Bengal (and even earlier in Kerala), while regional socialist parties emerged in Uttar Pradesh and Bihar. But Congress’s nationwide dominance remained the preeminent fact of political life, with temporary hiccups in the late 1960s and late 1970s, until 1989. Since then the situation has changed completely, and India now has a decentred democracy with a proliferation of strong regional parties, rather than a top-down democracy based on the nationwide dominance of one party.

There is now tremendous political diversity within states, and multiple regional options competing for votes. Consider the political dynamics of India’s six most populous states, which together comprise more than half of India’s population and elect 291 of the Lok Sabha’s 543 MPs. In Uttar Pradesh, power has alternated in the twenty-first century between two regional parties, the Samajwadi Party (SP) and the Bahujan Samaj Party (BSP). In Bihar, the two biggest parties are the Rashtriya Janata Dal (RJD) and the Janata Dal-United (JD-U). In West Bengal, the Trinamool Congress is dominant, and the only other large party is the Communist Party of India-Marxist, nominally a national party but effectively a regional party confined to West Bengal, Kerala, and the tiny state of Tripura. The situation in Tamil Nadu is similar—since the late 1960s, power has alternated between the Dravida Munnetra Kazhagam (DMK) and the All India Anna Dravida Munnetra Kazhagam (AIADMK), formed in 1972 after the DMK split. Speaking of undivided Andhra Pradesh, the Telangana Rashtra Samithi (TRS) is the most popular in Telangana, while the YSR Congress is rapidly emerging as the most popular force in the other two regions (coastal Andhra and Rayalaseema). There is also the older Telugu Desam Party (TDP), formed in 1982, and rumours that the current Congress chief minister of Andhra Pradesh is planning to float yet another regional party. Of the six most populous states, Maharashtra is currently the only state where the national parties – Congress and to a much lesser extent BJP – are leading players, but there too in partnership with regional parties: the Nationalist Congress Party (NCP) and the Shiv Sena, respectively.

Q. Why does “Transforming India” describe the Maoist movement as a regional phenomenon?

A. In the book I describe the history since the late 1960s of Indian Maoism in regional terms, unfolding over three ‘generations’ in different parts of India, shaped by specific regional political landscapes first in West Bengal and later in (undivided) Bihar and Andhra Pradesh, especially Telangana. Though the movement is weakening of late, it endures in some parts of India that are geographically remote and where state presence has been weak or non-existent (or when present, exploitative and cruel, particularly towards adivasi communities). There are some emerging examples of the problem of extreme poverty and neglect being addressed through imaginative policies at the state level. State governments also have a critical role since policing and counter-insurgency are largely managed at the state level. For example, the West Bengal government has been successful in defeating the Maoist challenge in pockets of the state where the movement had gained a sizable following just a few years ago. Outreach and development schemes since 2011 targeted to the needs of the local populations in these areas have consolidated the security forces’ containment of the Maoists. In Chhattisgarh too, it largely depends on the state government to bring the areas where the Maoists are active out of misery and marginalisation.

Q. What challenges lie ahead for India’s regional political players?

A. The story of India’s democracy can be viewed in three phases: between 1947 and 1989, there was almost continuous single-party rule and Congress was the hegemon. Since 1990, India’s politics has been fragmented and fractionalised, and we have seen the rise of regional parties based on caste, sub-caste, ethno-linguistic and other communitarian identities. This phase is still ongoing, but I can see the beginnings of the next phase. In the next 10 to 20 years, the most successful political leaders and parties will be those that can appeal to rising constituencies such as women voters, young voters (roughly between the ages of 18 and 35), and the growing numbers of voters with aspirations to a ‘middle class’ status and lifestyle. However, this third phase will unfold with a lot of specificity and variation across states, and within the overall context of India’s regionalised political landscape.

Click here for an earlier interview with Professor Bose, in which he puts the regionalisation of the Indian polity in historical perspective.

The Hindu right, DfID and diasporas in development (Part 1)