Erica Wald analyses anxiety about the intemperance of the European soldiery in nineteenth-century India, and the implications of methods of control in the cantonment for the shape of the British empire.

In his 1858 series on maintaining the health of the European soldiery, Norman Chevers, then a surgeon in the Bengal Medical Service (who would go on to produce a number of medical manuals for India), began a section dedicated to temperance with the warning that it was impossible to really convey how dire the situation of drunkenness among the European troops in India truly was. 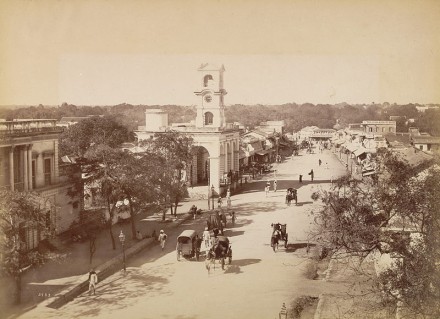 The men’s drunken behaviour prompted a raft of anxieties; ranging from social and class tensions to the expense incurred as a result of alcohol-related illness and crime, as well as broader fears about threats to ‘imperial’ or ‘national’ prestige. Colonial administrators and officers viewed intemperance as a vicious moral vice endemic among the soldiery.

The visible presence of a European corps of soldiers was thought to be essential to the maintenance of empire. From the daily drill and parade to his imposing uniform, the European soldier’s importance was as much symbolic as physical. However, medical and military observers attacked these same men for their supposedly wanton and ‘inferior’ behaviour, and display of dangerous tendencies which openly threatened not only military security, but broader imperial discipline.

As a result, the soldier seemed destined to maintain his ‘lowly’ status. From attitudes and measures taken to control intemperance to the punishments themselves, officials viewed the European soldier in the first half of the nineteenth century in India as little more than a fighting machine. Yet, paradoxically, as he represented such a high cost for the Company, control over his health and behaviour was of vital importance. This research speciﬁcally examines the methods and levels of control—both of which existed and were attempted in and around the cantonment. Crucially for this argument, moral and medical concerns were of critical importance in moulding this ordering. However, social and class perceptions of the men—and the fear of provoking their wrath—dictated what ofﬁcers and ofﬁcials felt was legally possible. The various ways in which the military and government imposed order on the cantonment (or attempted to do so) had serious implications for the shaping of the empire itself and European understanding of its inhabitants.

Medical and military concerns combined to create a new type of morality imposed on cantonments. Intemperance was seen not as a problem of the individual soldier and his self-control (or lack thereof), but of the soldiery as a whole. According to this rhetoric, the lure towards intemperance and bad behaviour came from without. It dismissed the agency of the individual soldier in actively seeking out drink (illicit or otherwise). Instead, given his ‘natural’ propensity to drink, attempts to regulate the soldier’s alcohol consumption targeted those who ‘encouraged’ him to do so. No doubt this perception of the men contributed to the construction of one of the tropes of colonial masculinity. As such, any attempt to prevent the men’s ‘natural’ urges, it was feared, could provoke unwanted consequences.

Measures to expand military control within and beyond the cantonment were thus frequently justified on the grounds of the men’s health. Central to these measures was the ever-present anxiety surrounding what is best described as the social and leisure activities of the soldiers. Linked, directly as they were, to health and therefore productive ability, there was an effort made, beginning in the early nineteenth century, to control and manage these activities. The low esteem in which the soldier was held helps to explain why proposals to shift the focus from alcohol to ‘healthier’ drinks and activities such as gardening, theatres and reading, were not adopted by either the Company or Crown for much of the first half of the nineteenth century.

Yet, as fearful as officials were of the effects of alcoholic and bodily intemperance, there remained a belief that both were somehow inherent to the soldier’s very being. This juxtaposition goes some way towards explaining why it was that little real progress (or even effort) was made in reducing the amount of alcohol which soldiers consumed.

Instead, it clarifies the alternate approach adopted—to regulate the ‘others’ in the cantonment who supplied the men with drink. In this light, the carefully balanced ‘proper’ functioning of the cantonment was seriously threatened by both those individuals outside its boundaries who attempted to lure soldiers away, as well as those who represented a ‘fifth column’ within, such as the wayward wives of European soldiers. These European wives who participated in ‘immoral’ activities (such as prostitution and the illicit sale of liquor in the barracks) were the focus of extreme anger and censure from both commanding and medical officers. Similarly, those arrack vendors in and around the cantonments who operated without government permits not only deprived the treasury of valuable revenues, but were thought to produce a much more lethal variety of spirits.

Perhaps most importantly for the formation and understanding of the empire, however, were the consequences of this approach. As countless invasive regulations were justified on the grounds of protecting the health of the European soldier, the Company pushed out the boundaries of the actual physical space under their control. Medical (and moral) demands made by officers, were quickly fortified and validated through regulations which expanded military space and gave greater, more absolute punitive power to commanding officers not only over soldiers, but over all those who came into contact with them, with significant implications for the shape of the British empire in India.

This post is an excerpt from: Erica Wald (2012). Health, Discipline and Appropriate Behaviour: the Body of the Soldier and Space of the Cantonment. Modern Asian Studies, 46, pp. 815-856.

Erica Wald is a Fellow in LSE’s Department of International History.

Historical inevitability? The regionalisation of Indian politics (Part I)