LSE’s Gautam Appa explains why claims that Narendra Modi has received three ‘clean chits’ for his alleged role in communal riots in Gujarat in 2002 are distorted.

On three occasions – one each in 2011, 2012 and 2013 – the Supreme Court of India has supposedly absolved Narendra Modi, the Chief Minister of Gujarat and the BJP’s prime ministerial candidate in the upcoming elections, of culpability in Gujarat’s communal riots of 2002. But a case against Modi has never been registered in the Supreme Court. So how has the court given him a ‘clean chit’ without being asked to adjudicate the matter? And on what basis does Modi claim a clear conscience with regard to the 2002 violence in Gujarat? 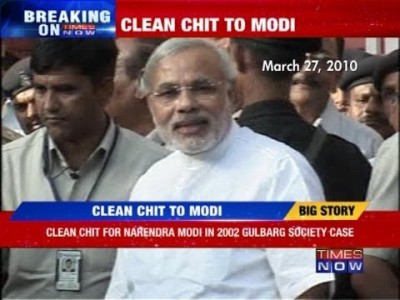 A clean chit for what?

The question the Indian courts are considering is whether there is prosecutable evidence against Modi to establish criminal liability for his role in the 2002 riots in Gujarat, which claimed the lives of more than 2,000 people and made 200,000 people, mainly Muslims, homeless. There are allegations that Modi masterminded the riots; more specifically, he is accused of the following:

Zakia is the widow of Ehsan Jafri, a former MP and state Congress Party member, living in Gulberg Housing Society in Ahmedabad. When news of the slaughter of Muslims following the Godhra train fire in 2002 started trickling through, scores of frightened Muslim neighbours gathered in the Jafris’ home believing that Ehsan’s connections would help ensure their safety. As a violent mob advanced on Gulberg, Ehsan made repeated phone calls to the police and political authorities – in Ahmedabad, Delhi, and even to Modi himself – pleading for help. But none came, even though police were present in the area. Eventually Ehsan and 68 others were massacred, many of them burnt alive. According to eye witnesses, Ehsan’s severed head was hoisted on a trident.

The SIT investigating Zakia’s complaint ran into difficulties. First, the Supreme Court had to drop two of its officers as they were found to be untrustworthy.  Then, in 2010, the special public prosecutor working with the SIT resigned, saying by way of explanation that “I am collecting witnesses who know something about a gruesome case in which so many people, mostly women and children huddled in Jafri’s house, were killed and I get no cooperation. The SIT officers are unsympathetic towards witnesses, they try to browbeat them and don’t share evidence with the prosecution as they are supposed to do.”

After all this, when the SIT filed its interim report, the Supreme Court took the unusual step of asking an eminent advocate, Raju Ramchandran, who was already appointed as an Amicus Curiae (friend of the court), to assist in this critical case and visit Gujarat, independently assess the evidence generated and meet with witnesses directly.

One clean and one not so clean chit

The conclusions drawn by the SIT in its final closure report filed on 8 February 2012 were not only different from those drawn by Ramachandran, but also from its own interim reports. In its watered down final report, the SIT concluded that there was not enough prosecutable evidence to bring charges against Modi. This led Modi and his supporters to make a new claim of having received a ‘clean chit’ by the SIT, a Supreme Court-appointed investigative body. True, but Ramachandran, who is also a court-appointed investigator, disagreed with the SIT’s conclusion. The most important point of difference was whether to believe the testimony of Bhatt, a serving police officer, who had stated that he was present at a meeting where Modi asked those present to permit Hindus to vent their anger. The SIT decided that Bhatt’s testimony was unreliable and that in its absence there was not enough prosecutable evidence against Modi. However, Ramachandran took the view that “it would not be correct to disbelieve Bhatt at this prima facie stage” and that Bhatt should be cross-examined in a trial to determine whether or not he was telling the truth.

It is worth noting here that both the SIT and the Amicus Curiae have only an advisory role—neither conveys the view of the Supreme Court. Had the SIT concluded that there was prosecutable evidence against Modi, it would not have meant that Modi was guilty; it would have merely made his prosecution more likely.

The case against Modi is ongoing

Zakia filed a protest petition against SIT’s clean chit in a Gujarat Magistrate’s Court, which decided on 26 December 2013 that the SIT had come to the right conclusion and that Modi should not be charge-sheeted. Once again, Modi and his supporters distorted the outcome to proclaim a third ‘clean chit’. On 18 March, Zakia approached the Gujarat High Court challenging the Ahmedabad Metropolitan court. This may yet lead to another ‘clean chit’ claim.  Eventually the appeal will reach the Supreme Court, which will decide whether a case should go ahead under the existing criminal law in India.

And therein lies the rub. Under the existing criminal law in India, it is unlikely that Modi would be found guilty of any of the charges brought against him. Prevailing Indian Criminal Law requires proof that the accused carried out, or directly conspired to carry out, the crime. This is distinct from International Criminal Law, under which a head of state who could have prevented a crime, but chose not to, can be found guilty. In this context, Modi might have been better off if Zakia’s case had gone to the courts in the first instance—by now he might have had a truly clean chit.