How have the policies adopted by the Indian government since 1991 restructured Indian society? In Reforms and Economic Transformation in India, Jagdish Bhagwati and Arvind Panagariya summarise economic and social changes that took place in the post-reform era. Swati Dhingra writes the book is valuable reading for researchers and policy practitioners, but misses out on the interaction between social policy and economic reforms in transforming living standards. 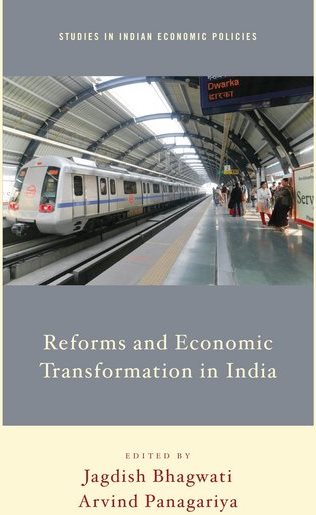 Reforms and Economic Transformation in India is the second volume in a series on Studies in Indian Economic Policies that aims to understand how the new policies adopted since 1991 changed the economic landscape of India. While the first book addressed the role of these policies in poverty reduction, this second volume evaluates their contribution towards structural transformation across sectors and enterprises, and social transformation through income convergence and entrepreneurship across social groups.

In this review, I discuss two overall contributions of the book. First, the book provides an easily accessible summary of a broad range of changes that took place in the post-reform era. Second, it raises the important question of why India experienced limited economic transformation towards modern industry.

While much work on economic reforms focuses on one or two aspects of the reform process, the main contribution of this book is to take up the challenge of examining different economic policies that are often implemented concurrently during liberalization episodes. For instance, the analysis goes beyond formal manufacturing firms to examine the changes that took place in services, public sector enterprises, entrepreneurship among socially disadvantaged groups and informal manufacturing. Further, it contains chapters with careful evaluation of the impact of previous economic reforms such as Chapter 7 by Goldberg, Khandelwal and Pavcnik on product innovation from tariff cuts on imported inputs. At the same time, it ventures into unresolved policy debates such as Chapter 5 by Kohli and Bhagwati on retail trade liberalisation.

The main thesis that emerges from the data analysis is that the post-reform era shows measurable changes such as lower concentration and product expansion in formal manufacturing, profit growth in newly privatized firms and productivity growth in services. Despite this economic growth, the contribution of the formal sector in employment has been at best negligible. Small enterprises (that do not employ any workers from outside the family) continue to provide employment to the bulk of the workforce. The employment share of these small enterprises was 80 per cent in manufacturing and about 60 per cent in selected services in 2006. Further, small enterprises have been the main source of employment for socially backward classes. On the one hand, the dominance of small enterprises points towards a competitive environment with low levels of concentration and high levels of entrepreneurship. On the other hand, this raises concerns about constraints to large-scale production which is associated with higher measured productivity and wages.

A second contribution of the book is to acknowledge this concern and ask an important question: why has structural transformation from agriculture to manufacturing and services, and from the informal sector to large formal enterprises been so slow in India? Compared to the past experiences of South Korea, Taiwan, and more recently, China, the number of workers in agriculture in India has not declined. The share of large firms (over 200 workers) in Indian manufacturing is small, 10.5 per cent as opposed to 52 per cent in China. Bhagwati and Panagariya emphasize that this could be the main reason why economic growth in the post-reform era has not made a serious dent on poverty. This book provides a preliminary analysis of the limits to economic transformation and it would be interesting to see how future volumes address the following unanswered questions regarding the post-reform experience of India.

First, which specific features of the Indian economy make its post-reform experience so different from the East Asian transformation? The first chapter of the book emphasizes that rigid labour laws have prevented large firms from hiring workers. Using micro data, Hasan and Jandoc show that enterprises in labour-intensive industries located in states with inflexible labour laws have significantly lower shares of large enterprises. As enforcement of labour laws is weak and firms have the flexibility to hire contract workers, this chapter points to the need for a detailed analysis to understand whether labour laws are a binding constraint on job growth in the formal sector. This would be informative in designing new labour legislation to accommodate the interests of employers, and the growing numbers of contract and informal workers who are currently outside the purview of most labour laws.

Second, what was the interaction between the economic reforms and the large gains in social policy during the past three decades? The book documents dramatic income convergence between socially disadvantaged groups and forward castes. If the gains were largely due to the economic reform package, then this social transformation can be considered the biggest achievement of the reform policy. However, the reform period coincided with the enactment of landmark social legislations such as the 73rd Amendment which devolved economic power to local governments in 1992, the Supreme Court decision of reservation for Other Backward Castes in 1992, and substantial steps to universalize education in 1995. To guide future policy reforms in India and elsewhere, it is important to assess the relative contribution of economic and social reforms and how they interacted with each other.

Finally, how did the reforms affect the traditional sectors and what will be their role in job creation in the future? Despite high output growth in the formal sector, the majority of the labour force has relied on employment in the traditional sectors of agriculture, trade and government enterprises. Recent policy reforms such as the new legislations to acquire land for industry, to liberalize foreign direct investment in organised retailing and services, and to further privatize public sector undertakings directly target these sectors. Moving forward, a key question is how the new policies will affect the ability of the traditional sectors to provide employment to those not absorbed by the formal sector.

This volume has shown that India experienced substantial economic growth during the post-reform era. Yet agriculture continued to be the largest source of livelihood, despite declining agricultural productivity. As arable land declines further and new reforms target the traditional sectors, future work will need to confront whether industrialisation can absorb the growing workforce and how economic and social policies can be designed to assist structural transformation.

A version of this review first appeared in the Journal of Economic Literature.

Dr Swati Dhingra is a Lecturer in LSE’s Department of Economics.

Bad Behavior has blocked 3861 access attempts in the last 7 days.