India and WWI: Piecing together the impact of the Great War on the subcontinent

India and WWI: Piecing together the impact of the Great War on the subcontinent

Centenary celebrations of the First World War have seen renewed interest in the experience of Indian troops. But Vedica Kant looks beyond the soldiers on the battlefield and considers the impact that the war had on the ‘jewel in the crown’ of the British Empire.

For decades the Indian contribution to the Allied war effort in the First World War has received little interest. In a postcolonial world the names of Indians who died in the conflict and are memorialised across the world in cemeteries maintained by the Commonwealth War Graves Commission were an uncomfortable reminder in both Britain and the Indian subcontinent of men who had fought for the Empire’s cause. In India in particular there is little existing memory that nearly 1.5 million Indians fought in the First World War.  This is slowly changing as the centenary of the war has brought renewed interest in the experience of colonial Indian soldiers, especially amongst the Indian diaspora in Britain. Yet, while the story of Indian troops in battle is one that is generating interest, what is harder to piece together is the impact the war had on India itself.

When the war broke out, a large number of Indian nationalists vocally came out in support of and campaigned for the war effort. Contributing to the war, they believed, would allow Indian to demand greater freedoms from Great Britain. For a large section of the political establishment complete independence was not on the agenda at the time. Instead they aspired to home rule and a style of government similar to Britain’s white dominions. As the Congress leader Bal Gangadhar Tilak took to saying, “Purchase war debentures but look at them as title deeds of Home Rule”.

There was in fact some political payback for this support. In August 1917 Edwin Montagu, the Secretary of State for India, announced that British policy in India was now aimed at “increasing association of Indians in every branch of the administration, and the gradual development of self-governing institutions, with a view to the progressive realisation of responsible government in India as integral part of the British Empire”. By stating, in the plainest terms yet, that self-government was not to be a constitutional status reserved for white colonies Montagu gave Indian nationalists a clear goal to work towards.

Despite the statement of intent from Montagu, the move towards self-government was slow to get off the ground in India. In fact, as the war continued the economic and political climate in the country deteriorated. The war years were difficult ones for Indians on the home front whose lives were negatively impacted by massive recruitment efforts, high taxes and a sharp rise in prices. Prices of imported basic necessities such as salt, sugar, cloth, iron and steel, and kerosene became rose and hoarding and profiteering only made matters for the Indian consumer worse. As a result disgruntlement against the government increased.

The war years were also witness to increased political turbulence with intensifying revolutionary activity, particularly on the part of the revolutionary Ghadar movement which aimed to gain India’s independence, by violence if necessary. The war had drained India of troops and at one point a mere 15,000 soldiers were physically present in the subcontinent. For revolutionaries, like the Ghadar, this weakness was ripe for exploiting and their violent activities flourished – particularly in Punjab and Bengal.

To curtail an anti-government propaganda the British reacted with a battery of repressive measures that were given legal standing through the Defence of India Act, which was passed in 1915 despite strong nationalist objections. Under the act, local authorities had more power to prevent rumours, deal with incitement of ‘hatred’ and make wholesale arrests.

As discontent in India continued to swell the government enacted the repressive ‘Rowlatt’ Act in March 1919. The Act aimed to extend indefinitely the wartime restrictions on civil liberties through a system of special courts and detention without trial and was met with near unanimous political opposition. In reaction Mahatma Gandhi launched his first mass civil disobedience movement. And it was in reaction to the Act that on 13 April a peaceful, unarmed crowd gathered in Amritsar’s Jallianwalla Bagh and was subsequently shot at under the orders of Brigadier General Reginald Dyer, without any provocation “to produce a moral effect”. The massacre was crucial in spreading unrest of a sort that British hadn’t seen since the 1857 rebellion across the country.

If the war was crucial in changing the political climate in the country its impact on individual veterans was no less important. The war did have an impact on the development of a political consciousness among some former soldiers and while the extent of this is hard to document colonial archives do tell us that former soldiers did play a role in the burgeoning national movement. For many Indian troops the war was an experience that broadened their horizons and increased their knowledge of the world – they had been exposed to new geographies, cultures and ideas and this impacted the way they negotiated life in India as well.

The historian Shahid Amin has noted:

“Military service overseas had a novel social and political impact on the peasantry recruited to the ‘Imperialist War’, whether from UP or the Punjab. Demobilised soldiers in uniform, flaunting their war ribbons, figured prominently in many anti-police and anti-landlord battles during the course of a prolonged peasant movement in the Awadh districts.”

Stories of veteran Indian soldiers, long quiet workers in service of the Raj, becoming politically active in the post-war period point at the ways in which the war was crucial in India’s political awakening. As one Indian veteran remarked:

“Previously we remained satisfied with the existing circumstances. But when we saw various people and got their views, we started protesting against the inequalities and disparities which the British had created between the white and the black.”

Vedica Kant is the author of a forthcoming book  ‘If I die here, who will remember me?’: India and the First World War. Vedica has an M.Phil in Modern Middle Eastern Studies from the University of Oxford and has written widely about WWI from Indian and Ottoman perspectives. 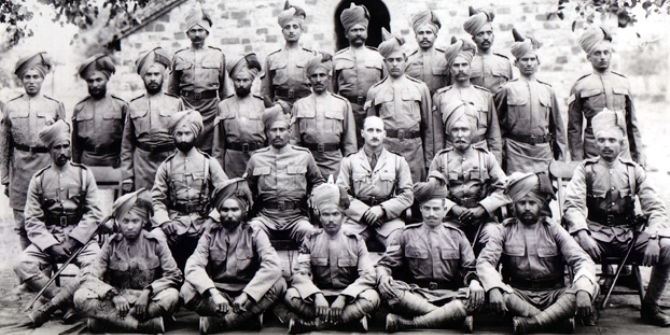 Bad Behavior has blocked 927 access attempts in the last 7 days.