Soon after announcing plans for an orange cover for passports of ‘unskilled’ Indians, the government rescinded the proposal. Kalathmika Natarajan writes that the passport has always been a document of privilege through which the Indian state has defined the ideal upper class/caste citizen eligible to travel abroad.

In January, the Indian Ministry of External Affairs announced plans to issue a new category of orange-coloured passports rather than the traditional navy blue for ‘unskilled’ Indians who have limited educational qualifications and have Emigration Check Required (ECR) status. The ECR category of passport-holders are those required to obtain ‘emigration clearance’ in order to travel to 18 countries, predominantly in West Asia. The proposal for orange passports was part of a decision to discontinue the last page of the current passport which lists personal information, ECR and address details, in order to make the passport machine-readable. Following widespread outcry about the discriminatory nature of creating a ‘second class of citizens’ subject to what a PIL filed in Kerala called a ‘separate colour code’, the Ministry rescinded the proposal. As Jiby J Kattakayam, writing in the Times of India, thoughtfully warned:

‘I can already see the looks of disdain for the orange passport holders in a highly class/caste conscious society like ours…..A pristine Blue to breeze through the West and a dirty orange to crawl through West Asian immigration counters?’

This recent decision is very much part of a long history of the Indian passport as a document of privilege through which the Indian state has defined the ideal upper class/caste citizen eligible to travel abroad – particularly to the sanctified realm of the West – without embarrassing the nation. It was this rationale that underlined a remarkable twenty year period from 1947 to 1967 when the Indian state granted passports as per its discretion to only a select category of people deemed ‘suitable’. This was standard practice until 1967 when an Indian Supreme Court bench ruled in a 3:2 majority judgement that the right to hold a passport and travel abroad was a fundamental right of every Indian. The two dissenting judges had meanwhile argued that a passport could not be demanded in the same way a railway ticket could, given that the ‘Government places in the hands of a person a document which pledges the honour of  the country….’ and therefore was entitled to  scrutinise and prevent  the movement of ‘undesirable emissaries’. The judges noted that unlike the USA where ‘travel is a means of spending one’s wealth’, the right to travel abroad was a luxury and not a right meant for poor Indians who apparently had to stay content with a railway ticket.

This reading of the passport as a document of honour that vouches for the ‘respectability of the holder’ and therefore was to be given only to those deemed worthy of respect helps understand the ways in which Indian authorities perceived the act of issuing a passport as a process of inscribing national identity onto an international stage. It also sheds considerable light onto the origins of the recent proposal to separate an ‘unskilled’ class of passport-holders. These delineations also shaped the Indian government’s creation of Pravasi Bharatiya Divas (Overseas Indian Day) in 2003 to celebrate the elite, predominantly upper caste and class Indian residing in the West as the ‘global Indian’ embodying the ‘potential of India to succeed in the global economy’  and as ‘the ‘“true” postcolonial, reassuring the West and reassuring to the resident Indians.’ The ‘honour’ of being registered as ‘Overseas Citizens of India’ was first extended to these Indians settled in the West: a privilege initially not extended to those settled in poorer parts of the world.

Much has been written about the experience of waiting for a visa as a particularly postcolonial condition: the famously long and frustrating queues outside the embassies of Western countries, the proliferation of ‘visa temples’ where one can seek divine assistance to abate visa anxieties, and the act of passing through immigration control where, as Amitava Kumar describes, “for some reason that he does not understand…(the immigrant) is filled with shame”. While the normalisation of racialised restrictions on movement as ‘immigration control’ is well-known, it is also essential to examine the limits of caste and class through which independent India has sought to restrict the movement of its ‘unsuitable’ citizens. This also echoes colonial distinctions between indentured Indian labourers of lower caste and class origins and other ‘free’ Indian immigrants who themselves delineated a certain kind of educated, elite Indian as more worthy of respect and fair treatment abroad than others.

The history of the Indian passport is thus a fervent reminder of the ways in which notions of caste and class pervade India’s understanding of the ‘international’  realm and inform the inequities of Indian citizenship. Indeed, there is much to Itty Abraham’s argument that “diaspora is foreign policy as a class-caste boundary”.  As part of a larger call to question the silence over caste in accounts of India’s international relations, it is important to interrogate the vocabularies and euphemisms of caste in the archive. Diplomatic documents on the passport are an archive of anxiety about those who are ‘unskilled’, ‘unsuitable’, ‘undesirable’, ‘dirty’, ‘unclean’ and hence undeserving of the luxury of travelling to the West. These are words tied intimately to the affective structures of untouchability as a means of ‘hygiene’: to stay ‘clean’ and not be polluted by a certain class of people. It is therefore essential to further unsettle the mainstream tendency to group together the political with the international, and the social with the domestic: a categorisation that reiterates the realm of foreign policy and international relations as untouched by the so-called domestic, social problem of caste.

Kalathmika Natarajan is a PhD Fellow at the University of Copenhagen and currently a Visiting Scholar at the Centre for Imperial and Global History, University of Exeter. Her doctoral research examines the British-Indian diplomatic relationship after Empire (1947-62) as a negotiation of entangled citizenship claims and intersections of race, caste and class in regulating the mobility of the Indian migrant. 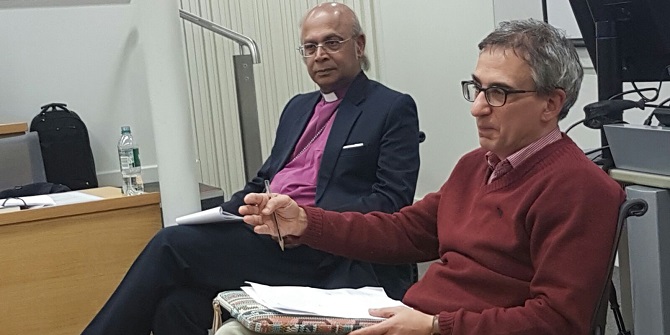 Bad Behavior has blocked 5108 access attempts in the last 7 days.