In the second part of this 2-part blog, Raj Verma looks beyond South Asia to assess foreign policy opportunities and challenges with key players on the international stage.

Click here for part 1 of this blog, which considers India’s evolving relationship with its South Asian neighbours.

China: Since the beginning of 21st century, there has been an increase in economic co-operation and engagement and political competition between the rising Asian Giants. President Xi Jinping accorded priority to India-China relations after coming to power in March 2013. Consequently, Premier Li Keqiang visited India in May 2013 and Xi Jinping visited India in September 2014. Like Li’s visit, Xi Jinping’s visit witnessed border transgressions by the PLA which cast a dark and expansive cloud on Xi’s visit. Economic engagement is lop-sided with India running persistent trade account deficits. China has made attempts to address this by allowing Chinese companies to buy products like pharmaceuticals, agricultural products etc for US$ 3.6 billion from India. In the future, India and China will compete and co-operate on various issues. They will both have similar concerns on changing global order and the establishment of a just and fair new international order. There is even possibility of increased trade and commerce and investment between the two countries. India and China will compete with each other in various fields like energy security but most importantly strategic space.

The biggest obstacles to improving Sino-Indian relations will be the unresolved border dispute and Tibet that is the presence of Dalia Lama and other Tibetan leaders in India. The majority of scholars and analysts view the two issues separately. Although this often seems to be the case in politics as well, the two are interrelated. According to Indian strategist Brahma Chellaney, “Tibet is the core issue.” Tibetan MP in-exile Karma Yeshi states “without resolving the Tibet issue, the border issue cannot be resolved.” There were 411 transgressions in 2013 and 334 transgressions by China till August 4 2014. The border transgressions will continue in 2015 until the boder is demarcated and this will vitiate the trust and mutual respect for each other’s concerns. This does not bode well for relations between the rising giants in 2015 and beyond.

United States: Prime Minister Modi visited the US after Xi’s visit to India to strengthen bilateral economic, diplomatic and military ties. According to the Government of India, since 2011 the US has surpassed Russia to become India’s largest arms supplier. By 2011, India was the third-largest purchaser of US arms, accounting for some US$4.5 billion in 2011. By 2013, India had ordered or purchased sensor-fused bombs, Apache helicopters, P8-I surveillance aircraft, M-777 howitzers, C-130J and C-17 transport aircraft and a large amphibious transport dock. The US now conducts more joint military exercises with India – approximately fifty per annum- than any other country including NATO allies. President Obama will be the guest on the Republic Day parade and celebrations in India in January 2015, an invitation only extended by India  to its closest friends. He will be the first US President to have been invited by India which shows the improvement and cementing of ties between the largest democracy and the oldest democracy in the world.

Although US-India partnership is based on myriad common interests and strong diplomatic and people-to-people exchanges, the driving force behind the strategic rapprochement is shared concerns about China’s rise. Like in the past, there is no paucity of disagreements between the two countries: Pakistan, Afghanistan, UN reforms, permanent membership for India of the UN Security Council, and economic challenges such as India’s unwillingness to open its markets. India’s policy of ‘strategic autonomy’ does not and will not allow India and US to be allies. The two countries will be partners and relations will improve in the long term but there will be some unwanted incidents in this partnership which need to managed responsibly and respectfully.

Russia: Since Indian independence, Soviet Union had been India’s all-weather friend. The mantle was passed onto Russia in 1991 and the  friendship has endured the test of time despite some deterioration during the Yelstin period. Russia was the largest supplier of military equipment to India until 2011. Despite the growing Indo-US ties, India still considers Russia as a more consistent and dependent partner. India has neither endorsed nor criticised Russia over the Ukraine crisis. President Putin’s visit to India in December 2014 has led to closer economic, political, defence and strategic ties between the two countries. 20 pacts amounting to approximately US$100 billion were signed in less than 24 hours between the two countries. Russia wants India to play an important role in the Shanghai Cooperation Organisation and become a full member.

The relations between India and Russia are based on mutual trust and is going to become stronger in 2015 and beyond as both try to foster a multi-polar world and Russia is moving more and more towards India in the wake of Western sanctions. However, the major challenge would be Russia’s close ties with China. Minor challenges would be the passive stance taken by both governments on things like supporting attempts of small and medium enterprises to develop business relations, efforts of scientific communities to establish contacts with each other and student exchanges.

Japan: India and Japan have enjoyed warm relations since the end of WWII. Japanese people – especially the right-wing administration of Japanese Prime Minister Shinzo Abe – have not forgotten Judge Radha Binod Pal’s judgment at the International Military Tribunal for the Far East where he pronounced seven Japanese accused of war crimes to be innocent. India and Japan are Asia’s largest democracies and are natural allies because they have no conflict of strategic interest. They both aspire to become permanent members of the UN Security Council and share common goals to institutionalise cooperation and stability in Asia. India and Japan have also increased security and strategic cooperation under the aegis of India’s ‘Look East’ policy.

In the economic realm, India and Japan complement each other. They are symbiotic because India is an emerging economy with a huge potential market that is constrained by inadequate capital and backward technology. The two countries signed agreements which will see Japan invest approximately US$35 billion in India over the next 5 years during PM Modi’s visit to Japan in September 2014. Trade and investment is set to increase between the two countries in the near future. They will also co-operate in the energy realm. Relations will become stronger in 2015 and under the new Abe government. Despite the increasing cooperation in strategic and other realms, India does not want to be a part of an alliance or a partnership to contain a rising China. The challenge is to strengthen ties without becoming a member of an alliance.

Vietnam: India-Vietnam economic, military and strategic cooperation has increased significantly in the new millennium. Vietnam is a ‘diamond’ in India’s ‘look East’ strategy as India tries to increase its diplomatic presence is South East Asia to counter China’s growing influence in South East Asia, South Asia and (most importantly) in the Indian Ocean. Vietnam has also courted India and wants India to play an important role in ASEAN and in the South China Sea.

The fulcrum of the growing cooperation between the two countries will be the strategic and defence cooperation. India has signed agreements with Vietnam to provide naval vessels and talks have been held to provide ‘Brahmos’ cruise missiles. India and Vietnam will be key strategic partners but not allies. India is contemplating providing with intelligence, surveillance, and reconnaissance technologies to Vietnam. Both countries want to strike a balance in their bilateral relationship and their relationship with China. There is scope for greater breadth and depth in economic, military, strategic and cultural cooperation between the two countries and the multi-faceted cooperation is set to increase in 2015 and in the future.

Dr Raj Verma is a Visiting Fellow at the Centre for International Studies, LSE.

Dr Verma is a regular contributor to the India at LSE blog. View his previous posts here. 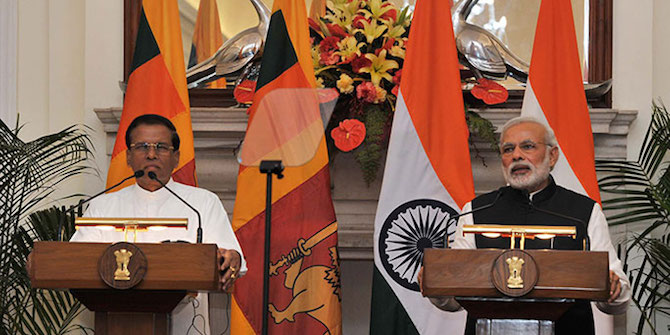