The IMF recently predicted that the Indian economy will outgrow China this year, upgrading it to the category of “miracle economy”. Chetan Ghate and Peter Robertson highlight the barriers to achieving this, and argue that the costs of failure, or even delay, are enormous.

India’s economy snatched world headlines recently with upward revisions to GDP growth and the IMF’s suggestion that India’s growth rate is likely to exceed China by 2016. But how likely is this?

The next miracle economy

If India can grow like China it will join a relatively exclusive club of aptly named “growth miracle” economies, such as Japan and South Korea. But for every successful growth miracle, there are many countries for which growth has stalled midway through their transition, and many more that never even got started. Thus the main stylized fact of world growth across countries is divergence – the rich countries get richer and poor countries stay poor. 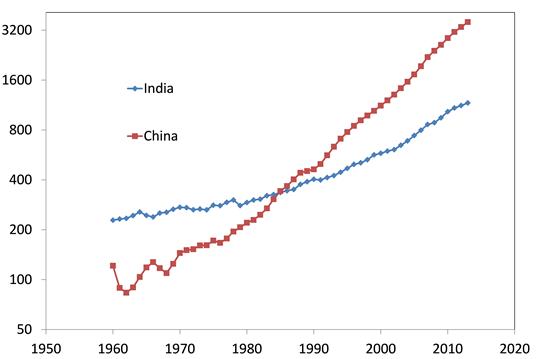 So the claim that India will be the next miracle economy is a not a trivial one. Since its reforms in the 1990s India economy has averaged 6.5% – 7% aggregate annual growth. Although this means that it escaped the Malthusian trap, it has still lagged significantly behind China’s growth rate of 10% per year. As shown in the Figure, India’s GDP per capita was overtaken by China in about 1990 and has slid further behind. Having been 3 times richer than China in the 1960s, India is now 3 times poorer.

The gap matters very much for people’s lives. Poverty rates in India remain muchhigher than China. In 2011, life expectancy at birth in China was 73 years versus 65 years in India. Child mortality under 5 years old (per 1000 children) was 66 in India versus 19 in China. Electricity consumption (MWh per person) was 0.5 in India versus 2.5 in China. Across a range of social indicators as summarized by the Human Development Index, India was 134 out of 187 countries.

India’s political leaders must take their share of the blame for this. The two pillars of economic growth are investment and productivity. In both cases government policies play a key role by providing adequate infrastructure.

India’s lack of public infrastructure, however, is glaring. Non-defense capital expenditure by the public sector is less than 1% of GDP. Social infrastructure – allocations towards public health and public education – are marginally higher. The Agricultural sector is still in a Malthusian trap with total factor productivity (roughly 1.5% annually from 1985-2005), barely keeping pace with population growth.

A key factor in India’s high poverty rates is the lack of manufacturing job-creation. Whereas Chinese growth relied heavily on large quantities of physical capital in the manufacturing, India’s best performance has come from human capital intensive service sectors. But this service sector growth has mainly benefited the educated middle classes and is not employment intensive.

A thriving manufacturing sector would have created more opportunities for the poor. But with few opportunities for factory employment, the incentives to attend school are low. This is reflected in India’s low primary and secondary education completion rates, a lack of attendance, non-age appropriate educational attainment, and high teacher absenteeism.

India is a young country

This is critical because, unlike China, India is a young country — approximately half of its population are under 25 years old. Government is also critical here in order to deregulate constraints on manufacturing, such as labor laws and export taxes, and facilitate investment in teachers and school infrastructure.

India’s failures relative to its potential can also be seen starkly when we look across at regions across the country. The richest district in India, Jamnagar, in the State of Gujarat, has a per capita income that is 36 times higher than the poorest district (Sheohar in Bihar). We show in recent work (Das, Ghate, and Robertson, 2015) that these gaps are getting larger rather than smaller. So the patterns within India mirror the world economy with divergence rather than catch-up.

We also show that a significant fraction of divergence is due to remoteness – that is districts that are close to cities grow faster. Allowing for this there is a pattern of catch-up, but at just 1.3% per year. At this rate a per-capita income gap between two districts would be reduced by only 10% over a decade.

So what does India have going for it?

Adam Smith observed “Little else is requisite to carry a state to the highest degree of opulence from the lowest barbarism, but peace, easy taxes, and a tolerable administration of justice.” If one compares India with, for example its “twin country” Pakistan, rather than China, it can be seen that India’s political stability, and a loyal pro-democratic military, have in fact served it well. Its strong democratic heritage is a secure basis for expecting peace and stability in the future.

India’s mature institutions are also India’s chief trump card over China. China has achieved success in growth, but the threat of political instability looms large on its horizon. It faces the problem of unbalanced growth between the interior and the coast, country and city, with extreme levels of inequality. The Chinese government (Communist Party of China – CCP) needs to redress these imbalances that will hurt its new middle classes, while maintaining authority and control.

As China’s growth slows the CCP leadership will be increasingly more concerned with maintaining its own legitimacy – for example by fanning Sino-Japanese tensions and investing in larger internal para-military forces. It may become increasingly distracted from economic policies needed to navigate the “middle income trap”.

So China faces many significant challenges. The historical precedent for this type of transition is the Soviet Union – which is a model that the CCP no doubt wishes to avoid. India’s problems, in principle, are much simpler. It has many examples to follow.

A boost to business

Against the backdrop of this robust institutional footing, the new leadership in India has given the country a boost to business expectations. More than previous administrations it understands that growth and markets are the foundations of development and prosperity. Under the NDA government, there will be moves to improve the ease of doing business, attracting FDI and boosting domestic investment, and strengthening governance. Also as a result of ongoing reforms States are now increasingly competing on investments and economic performance rather than populism.

But the costs of delay for India are enormous. The miracle economies, including China, show that 3 decades of growth at 10 per cent should be attainable. But every percentage point of growth below this target represents wasted opportunities in terms of poverty reduction, job opportunities, and schooling for future generations. And every percentage point of growth below 10% delivers another year of hope-crushing blows toexpectations of India’s possibilities.

But if India’s politicians can accelerate economic reforms, encourage business and further develop its strong democratic institutions, it should have a very bright future. Mr Modi, over to you.

This article originally appeared on the IGC blog on 16 March 2015.

Chetan Ghate is an Associate Professor within the Planning Unit of the Indian Statistical Institute in New Delhi. Chetan’s areas of interests include macroeconomic theory and policy, growth and development, political economy, and open economy macroeconomics.

Peter Robertson is Professor of Economics at the University of Western Australia. Peter’s research is focused on the interactions between economic growth, economic development and international trade. Particular interests include economic miracles in East Asia, China and India, human capital accumulation, international trade, and immigration. Current projects include regional growth in India, measuring the balance of military power, human capital accumulation in China, and the middle income trap.