LSE regional blog editors asked some of the university’s expert academics to pose and answer what they thought were key questions we face in 2015. Their responses spanned the pharmaceutical industry in India, counter-terrorism in Africa and the possibility of the UK leaving the EU.

In the 20 years since the TRIPS agreement obligated India to provide product protection for pharmaceuticals, it has held on to the sobriquet of ‘pharmacy of the developing world’. It currently produces over 20% of global generic products and is at the center of a coalition of the willing who want to improve affordability of patented pharmaceuticals for the so-called ‘bottom billion.’

Barely two weeks into 2015, the Delhi patent office rejected claims of pharmaceutical company Gilead to metabolites of their prohibitively expensive Hepatitis C drug, Sovaldi on the basis of a law that requires therapeutic efficacy to be demonstrated before a patent can be granted. This remarkable move comes even as several countries have granted identical claims without such evidence being presented. While the main patent application is still under consideration, the rejection is a natural progression from the 2013 SC judgment in Novartis v UOI which implied that such a law was in keeping with India’s international legal obligations under the TRIPS Agreement. These developments demonstrate growing competence in acquiring regulatory sovereignty over pharmaceutical innovation.

Even as India takes a stance on intellectual property issues, it continues to battle opposing centrifugal forces of international political pressure to match highest levels of patent protection and acute social morality issues around access to patented pharmaceuticals. This year I believe battle lines will be maintained and fresh ones drawn as rapacious pharmaceutical pricing strategies further corrode national health and insurance systems worldwide. Developments in Indian intellectual property law in 2015 could soon have an impact on a pharmacy close to you.

Siva Thambisetty is an Associate Professor at LSE’s Law Department. She tweets @sivathambisetty. For more commentary on Indian politics and policy, read the India at LSE blog:  https://blogs.lse.ac.uk/southasia/

The view on Africa:  What were the collateral damages of the West’s counter-terrorism operations in Africa? – Awol Allo

Counter-terrorism operations have had a corrosive effect on local struggles for human rights and democracy in Africa. The extraordinary powers given to intelligence agencies and the police within liberal democracies enabled authoritarian governments to redefine the internal friend-enemy dynamics and situate local political conflicts within the framework of the global war on terror. The forms of knowledge and systems of truth generated by the discourse of the war on terror supplied authoritarian governments with new conceptual constellations and explanatory schemas within which to rationalize and justify their oppressive politics. In the decade since 9/11, governments that stop at nothing to secure and consolidate their power turned to the discourse of terrorism to silence opposition politicians, journalists, activists and various forms of dissenting voices under the guise of fighting terrorism.

Just as the war against communism at the height of the cold war provided authoritarian governments such as Apartheid South Africa with juridico-political instruments used to justify their violence, the war on terror has become one of the key instruments at the disposal of authoritarian governments used to harass and eliminate legitimate political adversaries from the democratic public sphere.

Awol Allo, is LSE Fellow in Human Rights at the Centre for the Study of Human Rights and Department of Sociology.  For more commentary on African politics and policy, read the Africa at LSE blog:  https://blogs.lse.ac.uk/africaatlse/

The view on Europe: Will 2015 be Europe’s most important year since World War II? – Robert Hancké

In many ways 2015 is almost certainly one of the most important years in post-war Europe. The Greek election and the emerging tensions between the German government and the ECB have cast a very dark cloud over the Eurozone’s future. The rise of Eurosceptic parties everywhere, the possibility of a British election with an EU referendum as a possible outcome, and the certainty of renegotiations between Switzerland and the EU are changing the political and institutional landscape of the continent. All this intra-EU friction takes place, remember, against the background of increasing geopolitical tensions on its Eastern, South-eastern and southern borders. Sometimes you’d want to be a few weeks older to get over a predictably difficult patch in your life. I would not be surprised if most senior European politicians secretly wished they were a year older today.

The view on the UK: Can we avoid the rocky road to the Brexit cliff? – John van Reenen

After the May election, Britain may be heading towards leaving the EU (“Brexit”). David Cameron is committed to holding an “In/Out” referendum by 2017. Given popular antipathy to the EU, the blunt fact there won’t be significant concessions by other Member states and a general anti-elite sentiment (as epitomised by the close Scottish vote), the UK is stumbling towards the exit door.

Brexit will have serious economic consequences. Half of our exports are to the EU, we benefit from large amounts of foreign investment seeking a platform to the world’s largest market, competition from Europe has boosted productivity and EU immigration means Britain gets talent. Not only would there be immediate divorce costs, but we’ll lose the benefits of future integration, especially in services. Estimates by LSE’s Centre for Economic Performance put the loss of Brexit from trade cuts alone as high as a 9.5% reduction in average income. This is a similar level of economic damage as the global financial crisis … only this time it’s a voluntary act of economic self-harm.

The uncertainty engendered by possible Brexit is already making investors think twice about coming to Britain.

John van Reenen is Professor of Economics and Director of LSE’s Centre for Economic Performance.  For more commentary on UK politics and policy, read the LSE’S British Politics and Policy blog:  https://blogs.lse.ac.uk/politicsandpolicy/

The view on the US: Will 2015 bring a TTIP agreement? Maybe, with the help of TAA – Stephanie Rickard

Trade talks loom large in 2015. The Transatlantic Trade and Investment Partnership (TTIP) is hoped to be agreed by the end of the year. This agreement, designed to liberalize trade between the United States and the European Union, could be worth up to €100 billion for the EU alone.

Big trade deals engender big debates. In 2014, debates over TTIP, previously confined to elite political forums, went public. Even shriller public deliberations are expected in 2015. Negotiators face an uphill battle to convince a sceptical public of the merits of the deal. What, if anything, can they do?

Public opposition to trade agreements can be curtailed via purposefully-designed compensation programs. Such programs, like the United States’ Trade Adjustment Assistance (TAA) program, provide financial aid to workers who lose their jobs or experience a reduction in their wages due to increased trade.

This research suggests a way forward for TTIP negotiators. Public opposition to the agreement may soften if legislators agree to fund programs that compensate individuals for economic losses stemming from TTIP. Funding compensation programs may thus help to ease the passage of TTIP.

Stephanie  Rickard is an Associate Professor of Political Science at the LSE’s Government Department. For more commentary on U.S. politics and policy, read the LSE’S USAPP blog: https://blogs.lse.ac.uk/usappblog/ 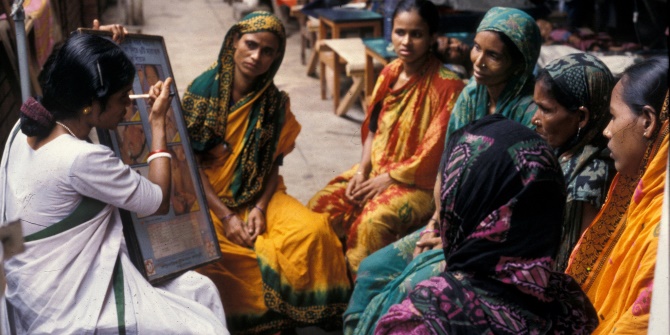 Despite constitutional guarantees, Bangladesh is failing to deliver adequate healthcare to rural citizens

Bad Behavior has blocked 3663 access attempts in the last 7 days.