On 13 July 2015, former Cabinet Secretary Ajit Seth spoke on the topic of ‘Governance in India- new challenges and opportunities’. The event was chaired by Rahul Roy-Chaudhury, Senior Fellow for South Asia at the IISS.  Ankita Mukhopadhyay and Arushi Kumar report on the event.

Swacch Bharat Abhiyaan, Make in India and the Digital India campaign. The common thread running through these headline-grabbing slogans over the past year is that they are all initiatives taken by the Modi government to tackle the nation’s long standing problems by maximising on one of India’s great strengths: human capital. Implementation remains challenging due to legislative inaction and regulatory delays, but perseverance is essential to meet the expectations generated by Prime Minister Modi’s huge electoral victory.

IISS’s Rahul Roy-Chaudhury introduced Ajit Seth as a Cabinet Secretary who not only assisted in the smooth transition of the government after the landslide victory of the Bharatiya Janata Party (BJP) in 2014, but also advised current Prime Minister Narendra Modi on major policy issues up to his retirement in June. There could be no doubt, therefore, that he was well-placed to reflect on governance in India.

Ajit Seth began his talk by stating that he would be dwelling on the country rather than personalities in his lecture. He offered a snapshot of the India that is emerging, with its new mobile generation, large youth population joining the work force, an economy shifting from agriculture to manufacturing and extensive migration from villages to cities in the quest for better opportunities.

Economic growth in India has led to significant improvements in governance, the liberalisation of imports of major products like gold, competitive and cooperative federalism under Modi and a vertical tax devolution –a watershed in India’s fiscal history. According to Seth, Modi’s people’s wealth programme, which targets the opening of 150 million bank accounts across the country, has met with major success. Under the banking scheme, account holders receive a debit card and accident insurance cover of up to 100,000 rupees ($1,654; £996). They also get an overdraft facility of up to 5,000 rupees.

However, every scheme brings new challenges. The people’s wealth program can be an example of this: now the majority of families have bank accounts, how can their use be encouraged? One approach of the government is linking them with ‘Aadhaar cards’. The Aadhaar (unique identity) scheme is the world’s largest biometric program, launched under the previous United Progressive Alliance (UPA) government. So far 87.9 crore (approx. 879 million) people have already registered and received their 12-digit Aadhaar number that can be used as identification. The ID has two benefits: first it reduces the impediment of lack of identification documents among the poor, helping them get bank accounts etc. in the first place. Second, the government plans to use the identification number for direct cash transfers of social benefits to the poor, thus both boosting bank account usage and diminishing corruption by cutting out middle men.

Currently, India has a growth rate of 7.3%, which the government aims to increase to 8%. Modi inherited an economy that was slowly recovering from crisis and macro-economic stability in India has now been restored to a large extent. This reflects well on the government’s performance but what remains to be done? Seth highlighted three key areas that are currently stalled and need urgent attention.

The Land Acquisition Bill must be passed in the Rajya Sabha (Upper House). Under this scheme, the Union or State governments can acquire private land for the purpose of industrialisation. The current Land Acquisition bill is outdated, having been in place since 1894. It is difficult to completely take over land currently, because even if a single house in a village disagrees with the industrialisation scheme, the whole project gets stalled. This has been happening to many projects over the years and only little pockets where manufacturing is actually happening, leading to deprivation of growth in many parts of the country. Political parties are also taking different sides, which is making it tougher to pass the bill (see more South Asia @ LSE analysis on land acquisition and the bill here).

Agriculture and its development is also a big concern for the Modi government. India wants another green revolution, or in the words of M.S Swaminathan, the father of India’s Green Revolution, “we want an ‘evergreen revolution’”. One particular challenge that Seth singled out is food storage. The problem is two-fold: there is wastage of food due to poor storage facilities, and wastage of potential income due to lack of storage facilities. The Prime Minister has insisted on the restructuring of the Food Council of India (FCI) in order to address the problem and recommendations were submitted to the Minister of State for Consumer Affairs, Food and Public Distribution early this year. The priority now is implementation.

Another sector in immediate requirement of government intervention is the job market. The new government has created 1.2 million jobs for the new workforce. This is a massive number for any country and Seth believes that this trend can continue for the next two decades. But gaps in capacity and lack of trained manpower are hindering development, something the national skill development program needs to address. On the social sector side, there are a number of challenges, especially with regards to health and education. There is a need to improve not just the availability of education but also the quality that is being imparted to students.

Administering a country like India is a monumental undertaking. There are people from diverse cultures, speaking different languages and adhering to distinct belief systems. This gives rise to numerous practical problems. On being asked by a member of the audience as to how the government measures purpose, Seth mentioned a new initiative undertaken by the government called PRAGATI, a multi-purpose and multi-model platform for pro-active governance and timely implementation, launched in March this year. Indian citizens are enthusiastic participants in elections: Seth pointed out that 0.83 billion voters are registered and half a million voted in the elections last year – a staggering two-third turnout. But the question now is how can democratic participation and responsive governance be improved between elections?

Seth offered an insight into a few of the steps that are being taken by new government to pursue their ambitious programs. However, it is hard to map the full extent of the challenges facing the government: major issues like corruption, mismanagement and women’s safety were not addressed directly in Seth’s talk but these nevertheless need urgent attention. Indians rightly wish to see rapid change, economically and socially, and the government has promised an ambitious development agenda. Yet as the talk highlighted, each challenge/opportunity is incredibly complex. The government needs time to consolidate its programs and if solutions are to be sustainable and effective long-term it is important to be realistic in our expectations how quickly change can be achieved.

Ankita Mukhopadhyay is currently completing an MSc in History of International Relations at LSE. She completed her undergraduate degree in History (Hons.) from Lady Shri Ram College , New Delhi and tweets @muk_ankita.

Arushi Kumar is currently interning at the International Institute for Strategic Studies (IISS) in London, where she is assisting Rahul Roy-Chaudhury, Senior Fellow for the South Asia Programme. She holds a BA from Sciences Po Paris and a MSc. in History of International Relations from the London School of Economics, where her dissertation, ‘Did the US’ cooperation with Pakistan during the Soviet invasion of Afghanistan come at the cost of its commitment to Nuclear Non-Proliferation?’ was awarded distinction. 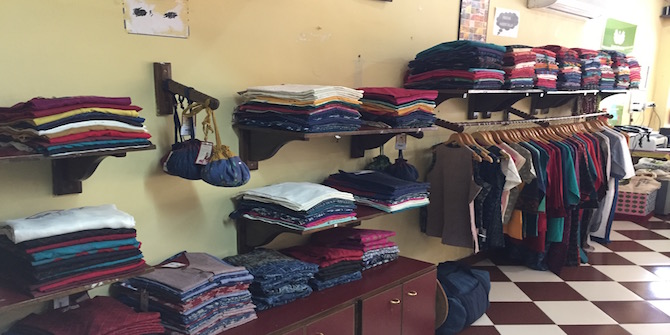 Bad Behavior has blocked 2949 access attempts in the last 7 days.