Last week the 2016 Budget was announced, with the usual fanfare and ensuing cacophony of commentary. But Maitreesh Ghatak writes that there are two groups of people whose voices will not be heard in this whole raucous town hall atmosphere: the poor, and the future generations. The problem is that it is also these groups who will be most affected by the changes that were announced.

India is a land of festivals and spectacles, so even something as prosaic as a Budget being presented in the Parliament comes with a certain festive flavor.

First there is the usual cacophony of commentary consisting of what can be called “up-down” economics which goes like: this went up, this went down, the relevant percentages, and mind-boggling figures like so many lakh-crore rupees here and there.

Then comes the inevitable commentary by the experts (present company included). No matter what who is in power, there is a certain predictable pattern in the reactions. The pro-reform folks express disappointment at all the populism and timidity of the government in not pursuing reforms more vigorously in their best Gymkhana single-malt-drenched drawl. The Left economists express suitable outrage as to why this Budget, even after so many years since Independence, is not radically pro-poor. And those in the middle – who are treated with scorn as not radical enough by the Left, and as soft-headed do-gooding jholawalas by pro-reform suited-booted economists – will inevitably crib about budgets in the social sector and in pro-poor programmes like MGNREGA either being cut or not increased enough in real terms. Commentators sympathetic to the ruling party (whoever is in power) will say “A good Budget, given the hard choices and mess the predecessors left behind”, and those sympathetic to the opposition will say “Bring back the good old days!”

Then there will be the more self-interested “what’s in it for me” type reactions regarding tax exemption limits, changes in tax rates, and subsidies. For example, this year the Budget has done enough to provoke the salaried middle-class with the proposal of taxing employee provident fund withdrawals. Whatever may the captains of industry say in public, (and they usually give a big thumbs up and say nice things), to understand how they really feel, one would have to look at the stock market’s reaction. One refreshing thing about the stock market is that people’s reaction genuinely puts money behind their words. Clearly the reaction of the investors has been lukewarm for all the Budgets presented by the current government. Last year, the Sensex closed at 0.48 per cent higher on Budget day, while this year it closed 0.66 per cent lower. It did bounce back the next day, but that is with the hope of an interest-rate cut by the man-who-can-do-no-wrong, RBI Governor Raghu Rajan.

There are two groups of people whose voices will not be heard in this whole raucous town hall atmosphere, and yet they are by far the biggest majority of the people who will be affected by the Budget. The first is the poor and not just the ultra-poor who are below the official poverty line. The second consists of future generations, who will have to pay off, in the form of higher taxes in the future, the debts that are incurred by the present generations. The first group votes, the second does not. And so, as elections approach, any government who wishes to be re-elected would have to make a push to make the Budget more pro-poor.

There is little in the present Budget that does not follow this standard script. Given the drubbing the BJP received in the Bihar elections and before that, in Delhi, the writing was on the wall that despite all the pre-election rhetoric about the Gujarat model and the failed populist policies of the previous government, what will happen is a U turn to a UPA-style Budget.

Let us take the example of the much-maligned MGNREGA that until recently was described as a symbol of all that was wrong with the UPA’s populist policies. The present Budget allocates Rs. 38,500 crore which is almost an 11 per cent increase from the last Budget’s allocation of Rs. 34,699 crore. This is a significant increase in real terms. While concerns remain about implementation and in particular money reaching in time for this demand-driven programme, given the distressed state of agriculture and the spate of farmer suicides, this enhanced allocation is a welcome development.

Moreover, I am always baffled by charges of fiscal profligacy regarding expenditure on pro-poor programmes. We should debate and discuss ways of reforming these, and in this context, one must praise the Economic Survey for both last year and the current year produced under the leadership of Chief Economic Advisor Arvind Subramanian for having some really interesting discussions regarding that. But it is strange to complain about the MGNREGA as wasteful when 29 public sector banks wrote off loans amounting to a total of Rs. 1.14 lakh crore in the last three years, which means, on average, a sum of Rs. 38,000 crore per year, which is the same as the allocation for the MGNREGA. Indeed, Rs. 25,000 crore will be given as an infusion to public sector banks under the current budget. RBI reports suggest that almost all of the bad loans are due to defaults by large borrowers. For example, of the Rs. 7,000 crore lent to Kingfisher, banks can only recover Rs. 6 crore.

Yes, MGNREGA is a programme aimed at subsidising poor rural workers and one should have a balanced discussion of the costs and benefits of these subsidies. Yes, in the long run, growth and poverty reduction depends on public investment in infrastructure, development of human resources, and policies that facilitate creation of jobs. Any diversion of taxpayer-funded public resources away from this long-run goal comes with a price tag. But what justification can one possibly give for corporates effectively plundering taxpayer money through willful default of loans of public sector banks when debt-ridden farmers are literally committing suicide?

Subsidies are another largely regressive transfer to the more affluent sections of society in their current form, as the Economic Survey persuasively shows. One notable thing about the current Budget is that subsidies as a fraction of the total non-plan expenditure has actually fallen marginally from 21.5 per cent to 19.7 per cent between the 2014-15 Budget (actual) and the 2015-2016 (revised estimate). That too is a welcome feature of this Budget.

What are the not-so-welcome features? First, the share of interest payments on government debt, by far the biggest item of non-plan expenditure, has stayed almost the same, and therefore, this is a structural problem on which the magic touch of Modinomics has had no bite so far. Second, the share of expenditure on the social sector has stayed virtually the same. Given the changed allocation rule of central budgetary resources vis-a-vis the states, it is difficult to gauge what the overall situation is regarding funds for this sector, but one does not get the impression it is a priority area.

To sum up, this is a reasonably good UPA-III Budget that tinkers at the margin. The trouble is, the UPA-II had the winds of growth in its sails until its very last years. There is every reason to suspect, as this piece argues convincingly that the growth estimates under the revised series that has been introduced under the current government are likely to be exaggerated. If they indeed are, then let alone smooth sailing, a perfect electoral storm may be brewing that cannot be prevented by minor tweaks in the Budget.

This article originally appeared 3 March 2016 on NDTV Profit. It is reposted with the author’s permission.

Event announcement: The Economic Forum for India at LSE 2014 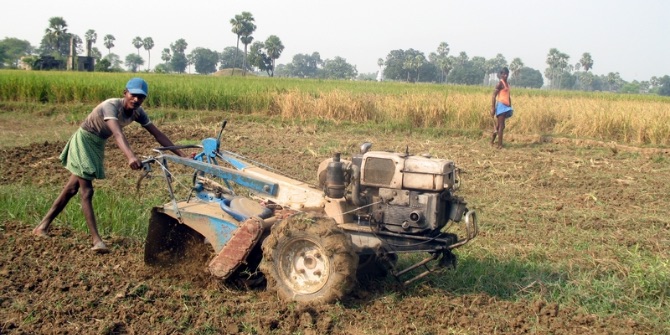 Bad Behavior has blocked 4902 access attempts in the last 7 days.