The Electronic Voting Machines used in Indian elections since 2008  allow for secrecy at the time of voting. However, at the moment votes are counted machine by machine and Booth Level Data is easily accessible, giving parties a detailed indication of who has and has not voted for them. Mukulika Banerjee calls for the government to adopt new technology that has been developed by the Election Commission to restore poll privacy.

Indians going to vote in the upcoming elections will do so believing that their vote is secret and the button they press on the Electronic Voting Machine (EVM) is known only to them. After all, while polling officials can hear the beep of the machine, indicating that a vote has been registered, they don’t know which button has been pressed. In a political system in which money and “muscle” are increasingly deployed during election campaigns, the solitude and secrecy of the EVM is the last refuge for the voter who wishes to exercise their choice freely, even at the last minute.

But does their vote stay secret afterwards? During the counting process, EVMs from polling booths across the constituency are brought together at counting centres and the votes for each party and candidate are counted machine by machine. It is therefore possible to work out the breakdown of votes for each party at each and every polling booth — and this data is freely available on the Election Commission (EC) of India’s website as “Booth Level Data”. For political parties and party workers, this information is gold dust for it allows them to know exactly how many supporters they have in each particular booth.

The problem is that one booth is provided for every 1,000-1,500 people and within two kilometres of every voter. In 1998 in my research site in West Bengal, three neighbouring villages shared a booth. But their populations grew and voter lists passed 1,200; in 2006, the two adjacent villages of Madanpur and Chishti got their own booth.

On the basis of my long-term familiarity with the people of these two villages, through years of interaction and conversations, I had a sense about which individuals would vote for which party. After an election, I could look through the booth level data, and if these were surprising, make informed guesses about who had “switched” or done something unexpected. I could broach this discreetly in conversation with the villagers and ask them why they had done it.

Thus, while the ballot was held secretly and fairly in the villages, the booth-level data greatly exposes the villagers and undermines the secrecy of their ballot. Party cadres and workers are precisely such close and knowledgeable observers. They are specifically assigned booths, to get to know their voters thoroughly and “deliver” their votes for the party. They call this “constituency mapping” and “booth management”. Parties spend enormous and growing amounts of money on supporting this work and process.

After every election I witnessed between 1998 and 2013, party workers would analyse the booth level data against the voters’ list after elections to see exactly how many people had not voted for them, discussing which individuals or groups had been “dissident” in this way and devising strategies for “dealing” with them in the future, whether through blandishments, social pressure or various forms of intimidation.

This compromise of secrecy is a relatively new problem in Indian elections. The secret ballot was introduced with the first elections in 1951 along with paper ballots. In 1961, under Rule 59A of the Conduct of Elections Rules, it was decided that paper ballots from different booths would be “mixed” in large drums at counting centres before counting began. It was therefore impossible to ascertain the provenance of any single vote.

But with the introduction of EVMs from 2008, this kind of physical mixing was no longer possible — and booth-level data was available for the first time. The Election Commission of India has been aware of this problem; it has been developing the technology to restore the secrecy of the ballot.

This is now available as the “Totaliser”, a new machine that mixes up votes from the hundreds of EVMs across a constituency at the time of counting, making it impossible to trace the voting patterns of individual polling booths. The Totaliser connects EVMs via their control units through a cable which enables votes from multiple polling booths to be registered and counted together and replicates the mixing of the ballot papers.

The Totaliser received the backing of the Law Commission in 2015. Its report making recommendations for electoral reform proposed allowing the Election Commission to use the new technology, particularly in areas vulnerable to harassment, intimidation and post-election victimisation. Numerous commentators, civil servants and pressure groups have also called for its use; the BSP, Congress, NCP, AAP and CPI-M have also all supported the Totaliser, at least in principle. The Supreme Court ordered the government to make a decision by the end of September 2016.

Yet, despite this overwhelming institutional, legal and popular demand for the introduction of the Totaliser, the government rejected it. A group of ministers, headed by Rajnath Singh, and including Arun Jaitley, Manohar Parrikar, Nitin Gadkari and Ravi Shankar Prasad, said explicitly that it would “hamper polling booth management”. It is argued that “booth management” helps parties to be responsive to the specific needs and concerns of local voters — but reality is quite different. Rather, local voters are intimidated by party workers with threats and violence before the elections, and then, reprisals after them if the booth-level vote has not delivered what the cadres expected.

In a country where the conduct of elections is a rare example of efficiency and where voters, despite the odds, still cling to the notion of voting as an important civic duty, this compromise of the freedom and fairness of elections is worrying and needs to be challenged. The government’s argument for preserving “booth management” conflates what is good for the party with what is good for democracy. What is clear is that preventing the Totaliser from being introduced is certainly not good for the “secret ballot”.

This article first appeared on The Indian Express and is cross-posted with the Author’s permission. It gives the views of the author, and not the position of the South Asia @ LSE blog, nor of the London School of Economics. Please read our comments policy before posting. 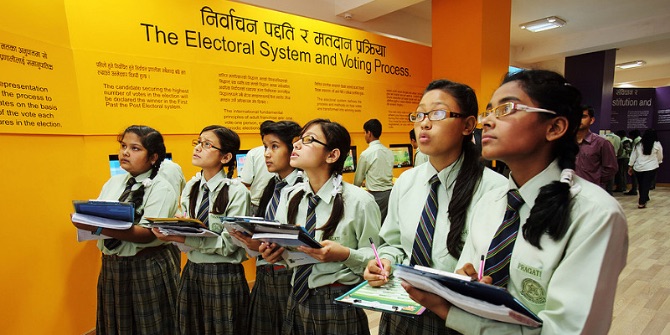