Journalist Shrabani Basu has authored multiple books on the shared histories of India and Britain. Ahead of her recent talk in the South Asia Centre’s Colony as Empire series, she spoke to Sonali Campion about her research on the largely forgotten Indian soldiers who fought in World War I, and on Noor Inayat Khan, the first female radio operator in Nazi-occupied France in World War II.

Your latest book For King and Another Country is about the soldiers from India who fought for the British in the First World War. They numbered almost 1.5 million – could you tell me about their different backgrounds?

The structure of the Indian Army dated back to 1857. Following the Indian Mutiny, General Roberts decided that he was going to recruit only from the so-called ‘martial races’, so by World War I it largely comprised people from the North West – Punjab and Rajasthan – and the hills of Nepal. You had the Pathans, the Sikhs, the Gurkhas, the Dogras and so on. General Roberts was very clear he did not want what he saw as the ‘effeminate’ people from the South or from Madras and he definitely didn’t want anyone from Bengal because they had been involved in the mutiny.

In terms of caste and class you have two scales: there were the peasant farmers, the Garhwalis who were shepherds and the Gurkhas who tended the land and carried loads.  On the other side you have the Maharajas who also volunteered in the First World War. So you had the Imperial troops and the Maharajas with their flamboyant turbans fighting side by side with illiterate farmers.

The book recounts personal stories of the colonial subjects fighting for Britain. What sense did you get of what it was like to leave your family and end up on a European battlefield?

This is recorded in the hundreds of thousands of letters which are now in the British Library. These show Indians were desperately homesick, they longed to get back home and who can blame them? They’ve been transported the Western Front, it’s wet and freezing cold. They’re writing from the trenches: “this is like a Mahabharata”, “we are being mown down like the bullocks in the field”, so the references are all very rural and draw on things their families will recognise.

They also write to their relatives, “don’t come to this war in Europe, don’t volunteer”. Right up to the end of the war the British were recruiting – even in early 1918 they wanted 100,000 more soldiers.  There were letters from the Viceroy saying, “we now have to raid the prisons as well” because it was getting hard to find people. It was called the largest voluntary army but you know when the headman of the village comes around, it was more than gentle coercion. Tough tactics were applied to get the so-called voluntary recruits.

Why do you think these colonial contributions are so absent from the history and the remembrance of the First World War?

India achieved independence so I think on the Indian side the new heroes for India were those who’d fought in the freedom struggle.  These soldiers who went out and fought for the British colonials didn’t matter anymore. The country had changed and the issues were different.

From the British side, obviously India had gained independence; these were now Indian soldiers not even Imperial subjects, so they did nothing to commemorate them.  Between the two countries these soldiers were forgotten, which is really unfortunate.  They fought bravely and I think the least we can do is remember their contribution.

The title of your book ‘For King and Another Country’ highlights they were essentially fighting someone else’s war. What motivated them?

It was Rs. 11, a uniform and three meals a day and that is the reason most of them signed up.  They were facing poverty, there was famine, the crops had failed and many of them had no choice. Once in the battlefield they also knew that if they showed bravery their pensions would be bigger or they would get land.

They would also be honoured. If you have a hero from the village who has got an award, the whole regiment and village is also proud.  The British were very good in making sure this pride was nurtured because they knew that this is where the soldiers’ loyalty lay.  The King was very remote so loyalty had to be to the regiment and the village.  I went to some of the villages were the soldiers who won Victoria crosses came from and they still have ceremonies there every year to remember these heroes.  They’re forgotten everybody else but in these tiny villages in the hills they are celebrated.

How did these soldiers fighting in World War I fit into the independence story? Were there aspirations of independence in the soldier’s minds at that time?

At that time, I don’t think there was an aspiration.  The loyalty was to King and country.  They would say, “you have eaten the salt of the Sarkar”, which refers to the ruling authority and the notion that you have been fed by him and therefore you have to honour and give back to him.  There was very little mutiny, only one incident in Singapore, and there were very few dissenters compared to even the English. Of course they were kept in a tight regime but they were loyal.

The significant year for me was when they came back and the Jallianwala Bagh Massacre in 1919. The Sikhs had contributed the most, the armies from the Punjab were the largest in the Indian Army, yet just 5 months after the war ends – even as the Paris Peace Talks are on going – British troops open fire on a peaceful gathering in Amritsar and hundreds of Sikhs are killed: women, children and those who contributed to the war.  I have the story of the first Indian pilot who was due to get married because it was one of the holiest days in the Sikh calendar, their Vaisakhi festival, and he says it was the darkest day of his life. The poet-laureate Rabindranath Tagore returned his knighthood, there was anger against the British Government right across India – it marked a shift.

This book is not the only one you have written about the little known wartime roles of people of Indian origin.  Could you tell me a bit about your work on Noor Inayat Khan and how you discovered her story?

I’m a journalist so I’m always looking out for unusual stories. I have always been interested in the Indians in the world wars because I feel those stories have not been written.  It was during the 50th anniversary of VE Day that there was a write up about the Indians, which had about two lines on Noor Inayat Khan with a little photograph the size of a postage stamp. It was labelled ‘Secret Agent, radio operator, killed in the concentration camp’.  I was absolutely intrigued, how did she get to the heart of the War in Europe, how did she end up in the concentration camp?  There were so many unanswered questions that I had to find out more and then the process started and eventually, I wrote her biography.

Tell me a bit about her journey

She was born in Moscow, her father was Indian and her mother was American.  Her father was a Sufi and he was told to take Sufism to the West which is why he travelled to the USA where he met Noor’s mother.  He was also a musician and he was invited to a salon in Moscow for a year and that’s where Noor was born in 1914, just before the First World War.  There was political tension in Moscow so they came to London for a few years, then they move to Paris and settle there.

Just before Paris is occupied in World War II Noor Inyat Khan and her brothers decide that they were going to come to Britain and she wanted to volunteer for the war effort.  She was a Sufi and she believed in nonviolence so it was a major decision.  She could have gone for nursing or the Red Cross but no, she wanted to be in the action and she joined the Women’s Auxiliary Air Force. Because she was fluent in French and a very good wireless operator she was spotted by the Secret Service.  She was recruited, given a false passport, a code name, a few francs and dropped into Paris, one of the most dangerous areas in occupied France.

How long was she working before she got caught by the Germans?

The average life of a radio operator in those days was six weeks but Noor lasted three months to October 1943 so she was brilliant in the field. Suddenly this dreamy writer and musician – she wrote children’s stories – was transformed. She was a tigress out there and she dodged the Gestapo, they tried all sorts of tricks to get her but they couldn’t.  It’s only because she was betrayed that she was finally captured. Then she was brutally tortured because she made escape attempts so they classified her as highly dangerous. Finally she was killed in Dachau concentration camp.

But she went down screaming “liberté” – the story does have a positive side because she tried to establish contact with other prisoners and kept the spirit of the others going saying things like “when we’re out, we’ll have champagne”.  They held her in chains for 10 months but they couldn’t kill her spirit.

The South Asia Centre Colony as Empire series continues throughout the 2016/17 academic year. Details for upcoming events are available here.

Shrabani Basu is a journalist, author and founder of the Noor Inayat Khan Memorial Trust. Her books include Spy Princess: The Life of Noor Inayat Khan, Victoria & Abdul: The True Story of the Queen’s Closest Confidant, and most recently For King and Another Country: Indian Soldiers on the Western Front 1914-1918. 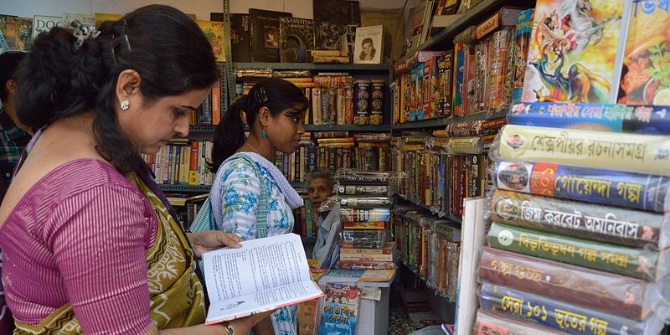