In a recent study, Rina Arya investigated how attitudes to caste varied between generations in the Hindu Punjabi community living in the Greater Manchester area. Here she offers a summary of the research and writes that it points to the continuing – albeit evolving – significance of caste in the diaspora.

Caste and class are significant issues within Hindu society, both in the Indian subcontinent and the diaspora, although views about these subjects are not uniform from place to place. My recent research concerns the generational difference (if any) between first-generation Hindu Punjabis within Greater Manchester who migrated to the UK from the 1960s to 1970s, and their progeny. This ethnic group has a distinctive profile in that, whilst Punjabis form the largest South Asian ethnic group in India, the religious affiliation of this group, namely Hindu Punjabis, makes them a minority. Many of the first-generation subjects had also experienced the political upheaval of Partition.

The first-generation individuals approached were white-collar workers, professionals from different fields including medicine and engineering. All these individuals had attained their qualifications from India (some had supplemented their education within the UK) and had migrated primarily for economic reasons. One of the objectives of the research was to investigate how caste conceptualised as jati – that is, ranked groups separated from each other along various lines – had an impact on their social behaviour within the UK, and to establish whether there were substantial differences between the socio-hierarchical beliefs they were raised with and the ones they held post-migration. The subsequent objective was to contrast these views with those held by second-generation Hindu Punjabis to determine the extent of generational difference.

Caste, in its complex formulation, is one of the most influential forces that determines socio-economic realities within India particularly, but has been subject to reform in recent decades. In the UK there have been calls for legislation to recognise the realities of caste discrimination, as reflected in the inclusion of the issue of caste in the Equality Act 2010. Recent studies, for example authored by Hilary Metcalf and Heather Rolfe, and Rusi Jaspal and Opinderjit Kaur Takhar, on the role that caste exerts within everyday life in the UK take seriously its continuing presence within Hindu and even more widely South Asian societies. The need to capture the views of the first-generation decades after they have settled has now become critical given that they are in the later stages of their lives. The fact that they had spent much of their adult lives in the UK prompted questions as to whether their attitudes about caste had changed over the period.

The research methods deployed were chiefly interview-based. A set of semi-structured questions based around guiding themes were put to the interviewees and through their elaborations information was elicited about their attitudes towards caste. Since caste informs all aspects of life, subjects invariably explored different facets of their life experience. Interestingly, conversations were less lucid when I asked specific questions about caste (to the first-generation cohort). It was profitable to explore the significance of caste indirectly by talking about social relationships in tangible terms. Many of the first-generation cohort chose to be interviewed as couples, so their responses were combined, and this gave an interesting perspective on the dynamics of family life. It also yielded fruitful results as the interviewer became privy to the musings of couples, who, as the interviews developed, ended up facing each other, almost locked in their own private worlds. Some of the second-generation interviewees were the children of the first-generation subjects and this generational divide provided grounds for useful comparison.

On the whole, the findings concerning the generations varied with the exception being the subject of marriage. In general, the first-generation felt more strongly about the need for separation along caste lines. What emerged is that while these views held sway, the exercise of the intermingling of castes became blurred during the early years of migration when the number of South Asians in the diaspora was low. During these initial years, comfort was sought in the kinship of other Indian migrants, who shared places of worship and other facilities but this gave way to the imposition of boundaries when groups became more settled. While some were more open than others to lower castes, the general feeling was that South Asians ought to adhere to the social status bestowed on them by their family name and identity. However, there was an acknowledgement that social mobility gained through education was desirable and had the potential to change one’s position in society. In most discussions about caste with the first-generation cohort, fears were raised about those lower in caste to them. Higher castes, on the other hand, were not mentioned as being threatening. The perception then was that the dangers lay in contaminating boundaries incurred by those lower in the hierarchy but not from above.

Second-generation interviewees were less certain about the typology of caste. Their understanding of different castes was not as deep-rooted as it was for the previous generation. They spoke less about their interactions with different castes, preferring instead to vocalise their thoughts about caste-based discrimination in the abstract. Many did not agree with treating people (favourably or otherwise) based on their caste identity. While caste was insignificant or unimportant for many when it came to choices about friendships or social interactions, it was often key in questions of marriage, mainly because of parental pressure. Caste was regarded as an unavoidable issue that presented itself during discussions of marriage when they reached a certain age, and this was a situation that all interviewees had encountered. Some had succumbed to family pressure concerning their matrimonial decisions whilst others had steered a different path.

This study has shown the continuing significance of caste within a group of Hindu Punjabis within Greater Manchester. One of the main challenges continues to be the extent of variation concerning how the term ‘caste’ is used. It is fair to conclude that the concept itself is polysemic in that it means different things to different users. And even within individual use there was variation of use over time. First-generation interviewees were more structured in their use of the term when reflecting on their experiences of caste interaction in their lives prior to migration where their impressions were more vivid. The pertinence of caste manifests itself in fewer ways for the second-generation. Further research on the attitudes of caste will enrich the literature, especially those that capture the views of the third-generation and those following.

Dr Rina Arya works in the areas of art theory and cultural anthropology. Author of Francis Bacon: Painting in a Godless World (2012) and Abjection and Representation: An Exploration of Abjection in the Visual Arts, Film and Literature (2014), she is currently working on a book about the cultural appropriation of Hindu symbols. 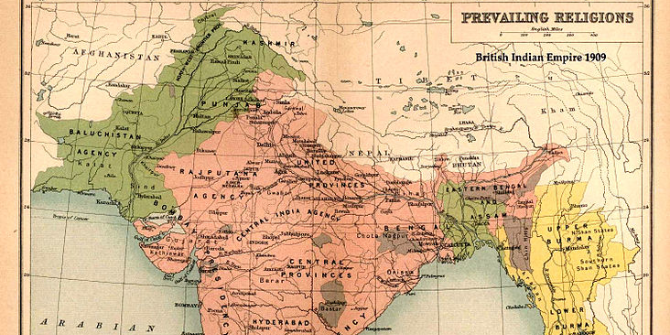