Lady Kishwar Desai opens up about how started the Partition Museum in Amritsar and her vision for the project, which will include an archive, centres in other locations and a publication by the end of the next year. Drawing on her experience of setting up the Museum as well as her parents’ migration to India, she tells Mahima A. Jain that most of those who witnessed the Partition hope that the future generations will live peacefully and not experience what they have gone through.

MJ: Can you run us through how the Partition Museum came into being? It’s journey so far…

KD: The Partition Museum was something that I had always wanted to create and had been thinking about it for around 20 years. It was always, for people like me, whose parents are Partition survivors, a troubled past that required documentation before it was too late. It also required a physical space so that future generations would understand what happened at the time of Independence and Partition when people were forced to leave their homes overnight— in the largest forced migration in history. Over 18 million people were affected. Yet there had been a silence about this for a long time.

Around two years ago, I got some friends and family members together and requested them to form a group so that we could do this. To my pleasant surprise (unlike in the past) all of them agreed — and now we have the world’s first Partition Museum at Town Hall, Amritsar.

Of course, we still had to get a building — we wanted the Museum to be ready by August 17,2017 — and towards this we began holding a series of get-togethers and discussions in India and in the UK. We were fortunate that the erstwhile Punjab Government in India, with Sardar Prakash Singh Badal as Chief Minister, supported the idea. We were eventually allotted a beautiful space at Town Hall in Amritsar, Punjab. This is walking distance from the Golden Temple. In fact we are immensely grateful for the support we have received both from the former CM as well as the present CM of Punjab Captain Amarinder Singh as they both felt strongly that the story of Partition needed to be told. However, whilst we had a building we had no money — and in this again we were fortunate because corporates and individual sponsors began to step forward. Of course, money was also donated by smaller donors — and this is an ongoing process. We now have a full time Museum CEO and curator, Mallika Ahluwalia, and there’s a team in Delhi and Amritsar who are constantly curating and working on the expansion and maintenance of the Museum. But essentially this is a high energy People’s Museum, unlike any other, in which work is ongoing as we collect memories, memorabilia and of course money to run it.

MJ: Why is the Partition Museum such a crucial space in contemporary India, what has been the response since Museum opened?

KD: The response has been phenomenal and our CEO has just received an award for excellence for the Museum. The visitor numbers are increasing every day, we are getting thousands of visitors every week. More importantly, the Museum has been covered extensively in the press, so that information about it is now available globally. We are improving our online presence, but because we are essentially an NGO, we still rely on voluntary help. Always happy to welcome any professionals who might want to help us! The Museum had a soft launch last year on 24th October when only three galleries were opened and this year we completed all 14 galleries by the 70th anniversary of the Partition of India. On our request, the day of the launch, 17th August, was recognised as Partition Remembrance Day by the Punjab Government and will be commemorated every year. This is the world’s first and only Partition Museum, and our tribute to the resilience and courage of those who went through difficulties and pain of Partition in order to help build the nation they had migrated to.

MJ: Migration remains a critical issue across the world today, but you’ve mentioned that Partition of 1947 was different from any other migration in history. Can you explain?

KD: Firstly, this is the largest forced Migration in history. Second, the migrants were, strangely enough,  leaving their homes — for a ‘home’ in a new country which was also supposedly now going to be their ‘country.’ Yet they were traumatised by the experience of violence, of insecurity, and of the migration and resettlement process which was worsened by the haste in which Partition took place, largely thanks to Lord Mountbatten.

MJ: Stories and facts are central to Museums. How did your work as a former journalist and an author shape your experience of heading this project?

KD: I suppose I am basically a story teller — as an author, I am attracted to stories which are meaningful and as a former journalist, I am interested in stories which have a deep significance in the contemporary world. I also believe that Museums are alternate centres for learning but the learning must be relevant. As the Partition Museum has a very strong narrative, supported by the hundreds of real life stories playing in the galleries, it appeals to today’s generation as well as older visitors because it tells us why the world is the way it is. My own experience of endless research both for my books and my articles (I am a research junkie!) as well as years of working in TV were very helpful in the documentation and the visual presentation. Though of course , all credit must go to the CEO and the whole team that has worked on the Museum, day and night.

MJ: How do you plan to take the project forward?

KD: We do want to make this into a space for study and support the Museum with the world’s largest archive on Partition. We would also like to recreate the Museum in other spaces around the country and the world — just as you have the Holocaust museums in different cities. Now that we have the information and the experience, this would be possible, but we need the funding and the support. If there are any supporters out there please do get in touch!

MJ: Do you have any works of fiction or non-fiction in the pipeline? Is a publication from/surround the Partition Museum likely?

KD: I am working on two non-fiction books at present —one is on Indian history and the other on early Indian cinema. After that, I have a novel I am desperate to write! And yes, a book based on the  Partition Museum material will also be published before the end of 2018.

MJ: Finally, could you tell us one story from the Museum that you’d like to share. Either about the Museum or of the people mentioned in the Museum?

KD: It is difficult to select a single story as each of the hundreds of stories in the Museum are extremely powerful. As the stories are about love, loss, longing — they not only contain nostalgia for an era gone by but also hope for the future. I find it immensely moving when I walk through the galleries and listen to these very dignified elderly people (most of the recorded stories come from the generation who had experienced Partition) with their white hair and wrinkled faced, speaking about their experiences, usually without recrimination or bitterness. Most of them express the hope that the future generations will live peacefully and not experience what they have gone through. It is their memories, their generosity for sharing the memories and their blessings that make the Museum unique.

The podcast of Lady Kishwar Desai’s talk on Partition, 70 years on: what have we learnt from the division of India? is available on the LSE website here.

Lady Kishwar Desai is an author and columnist. She has written four books. She is the Chair of The Arts And Cultural Heritage Trust (TAACHT) which has just set up the world’s first Partition Museum at Town Hall, Amritsar, Punjab, India. She tweets @kishwardesai1 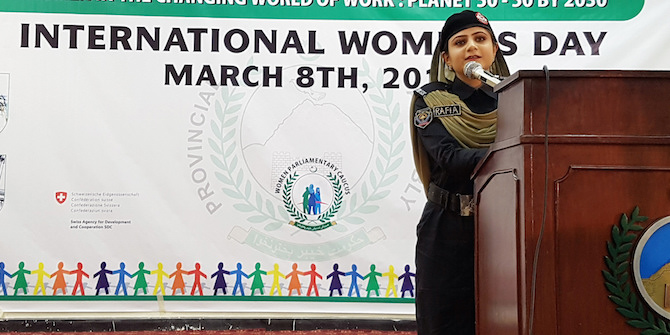 Bad Behavior has blocked 2578 access attempts in the last 7 days.