As Myanmar and Bangladesh discuss the possible repatriation of over half a million Rohinya refugees, many of the Rohingya population stranded in Bangladesh remain sceptical and afraid, comparing their uncertain status to ‘a life of football‘, Nasir Uddin writes.

In the last four months of 2017 Myanmar security forces made an atrocious crackdown in Rakhine state, which triggered a massive influx of Rohingyas to Bangladesh. Now the global community has sought immediate repatriation, but Rohingyas interpret it as a “football match” between Bangladesh and Myanmar.

Mr. Amir Hossain, a recently arrived Rohingya of 59 in Bangladesh, explained to me on October 30th, 2017, “Rohingya’s is a life of football. One kicks to push in, and another kicks us to push back”. Another refugee, Mrs. Zulekha Khatun, a newly arrived Rohingya woman of 51 years old, told me on November 21st, 2017 in Ukhia, ‘We, the Rohingyas, lead a life as if we are footballs. Everybody kicks whenever [they] gets a chance, but nobody scores and thereby no result. We live in nowhere and don’t know [where we] will go.”

Myanmar states that Rohingyas are Bengalis, while Bangladesh claims Rohingyas are Bormaya [residents of Burma or Myanmar as it is now known]. “It seems we are like a rolling football moving from one place to another determined not by us, but others.” This statement is more than one individual’s state of mind, and manifests the grave vulnerability and deep uncertainties of Rohingya lives in both Bangladesh and Myanmar. During the last four decades, the Rohingya people, who are often identified as ‘the most persecuted ethnic minorities in the world’, have undergone a series of atrocities, systematic killing, random burning of houses and properties, uncountable raping of girls/women, and forced displacement perpetrated by Myanmar security forces as part of the state’s policy started in 1978, which made them think of themselves as ‘football’; a metaphor of vulnerability. In 2017, the degree of atrocities was so extreme that the UN Human Rights Council termed it as “a textbook example of ethnic cleansing”.

The rhetoric of Mr. Hossain’s statement reveals the hidden transcript of Rohingyas’ interpretation of the repatriation dialogue between Bangladesh and Myanmar. On 2nd October 2017, the Union Minister for the Office of the State Counsellor of Myanmar, Mr. U Kyaw Tint Swe visited Bangladesh and willingly offered Mr. Abdul Hassan Mahmood Ali, the Minister of Foreign Affairs of Bangladesh, to bring the ‘Myanmar’s residents’ back. Following three exchanges of meeting, Bangladesh and Myanmar reached an agreement, signed a deal and formed a ‘joint working groups’ to expedite repatriation process while killing was still going on in Rakhine.

In 1978 the Rohingya first fled persecution in Myanmar and the first influx of refugees was approximately 200,000. Bangladesh initially sheltered them and under a bilateral agreement with Burma [it became Myanmar in 1989], almost all were repatriated. The second big influx, about 250,000, took place in 1991 and again under another bilateral agreement, 236,000 Rohingya were repatriated. But, many returnee Rohingya of the first and second phase came back to Bangladesh in different ‘illegal ways’ since the situation remained unchanged there. Then around 120,000 in 2012 and 87,000 Rohingyas in 2016 fled to Bangladesh to escape deadly violence, but none were officially repatriated. Particularly, following the adoption of the Myanmar Citizenship Law in 1982, when the citizenship of Rohingya was taken away, their movement was strictly restricted, their education, freedom of movement, liberty of making choices, and even the functions of social institutions were imposed strong restriction by the Myanmar state authority. It is hardly surprising then, that such experiences and the restriction of movement have led Mr Hossain and Mrs Khatun to use the football analogy to describe the Rohingya’s extreme of state of vulnerability. 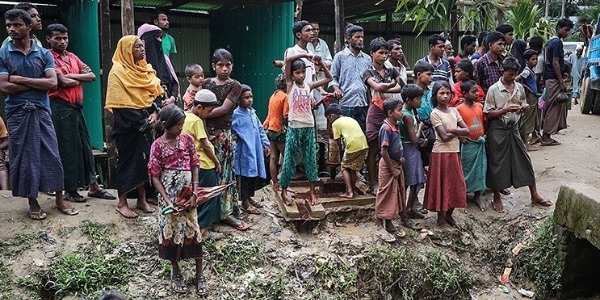 Bangladesh seems to put belief in the ‘deal’ whilst the majority of Rohingya do not due to their previous experiences. Their scepticism came true in a few days when many credible media outlets published news of forces destroying Rohingyas’ homes and settlements in Rakhine state even after the formation of ‘joint working group’. These contrasted pictures reveal that Myanmar’s ‘deal’ is a clear political and diplomatic trick to divert global attentions and reduce the mounting international pressures. It seems an eyewash to lessen escalating criticism for committing an unprecedented ‘violence’ perpetrated by Myanmar security forces, ethnic extremists and Buddhist fundamentalist in Rakhine. What Myanmar is doing with Bangladesh in the name of bilateral diplomacy is a mockery to keep aside the possibility of multilateral engagement, and the intervention of the United Nations in the process of meaningful and effective repatriation.

During the last four months, about 646,000 Rohingyas fled to Bangladesh and the majority of them are women, children and old people because many Rohingya youths are said to have been killed. According to many international rights forums’ reports, and the statements of newly arrived Rohingyas, more than 10,000 Rohingyas were killed, 354 Rohingya villages were completely burnt down, and hundreds of Rohingya girls and women were raped. Though the UNHRC termed it as ‘a textbook example of ethnic cleansing’, many others (Penny Green, Thomas MacManus & Alicia de la Cour Venning, Azeem Ibrahim, and Maung Zarni, Ashley Starr Kinseth etc.) called it clear ‘genocide’. Due to this ongoing genocide in Rakhine state, Aung San Suu Ki, the de-facto chief of the state, has also been strongly criticised across the world for committing ‘genocide’ and ‘the crime against humanity’ as she implicitly supported this deadly violence.

In protest of this massive killing, torture, and violation of human rights, the international community (the United Nations, European Union, Organization of Islamic Conference, etc.) and international rights bodies (like the Amnesty International, and Human Rights Watch etc.) condemned Myanmar and asked it to stop their persecution of the Rohingyas, but Myanmar paid no heed. The atrocities are still being committed, though the trend is a bit lower than the same at the beginning. The influx has not been stopped yet, despite huge criticism from every corner across the world except Russia, China, India and Japan. There are a lot of geo-politics, global political economy, regional interests in the various forms of economic and political forums, and the competing economic supremacy in the global arenas for fixing their position up on Rohingya issues, but the lives of the Rohingyas are in the state of ‘do or die’ situation. Indeed, many states and leaders in the global arena are still thinking of their own political and economic interests whilst people are being killed inhumanly and are driven from the country during this relentless persecution.

Bangladesh has thus far given shelter to the newly arrived Rohingyas in Ukhia and Teknaf, Southeastern Bangladesh, where 500,000 Rohingyas have already been living for a couple of decades. Combining the old refugees and the new arrivals, more than one million Rohingyas now suffer from inadequate nutrition, minimum health care, sanitation, drinking water, and a minimum space of living, which have created the biggest refugee crisis in recent history.

Whilst Bangladesh still expects that Myanmar will finally bring their ‘residents’ back, the majority of Rohingyas do not trust Myanmar. They believe they will be brought back for killing – not for living. Bangladesh is also not prepared to host Rohingyas for long and hence is trying to bring them back at any cost. If this is the case, what is the final destination of the Rohingyas? Who will finally take on this responsibility? Noone knows the answer.

Nasir Uddin is a Cultural Anthropologist based in Bangladesh and a Professor of Anthropology at the University of Bangladesh. He can be reached at nasir.anthro@cu.ac.bd