As long as private wealth grows faster than income, workers will remain excluded from any notion of shared prosperity. Rishabh Kumar digs up the records as far as possible to build wealth-income ratios for India and investigate their relationship to the structure of national savings.

Wealth-income ratios are rising everywhere. Put simply, the accumulation of wealth is outpacing economic growth. This is true in America, Europe and Japan, as well as China and Russia. In recent research, I found this same trend to persist in India where wealth-income ratios have been trending upwards since the 1970s. The questions that follow are: why is wealth outpacing income growth in such distinct economies and what are its implications?

Had we assumed rising wealth was a phenomenon for the rich world only, the problem would be mostly explained away using the standard model of capital accumulation. In these models the long run wealth-income ratio (b) is simply the ratio of saving rates (s) to income growth (g). So for example, if the saving rate is 10 per cent and income grows at 2 per cent then wealth will be worth five years (500 per cent) of national income. Differences in wealth-income ratios between Europe and the US accordingly stemmed from differences in saving rates (s is higher in Europe) and economic growth (g is higher in the US). Facing low growth due to demographic stagnation, past savings would come to dominate national income and Thomas Piketty’s famous law r > g would create a chronically worsening state of inequality. The beneficiaries would be those who own private property since they could rely on profit rates (r) to generate capital income. But the cases of China, Russia and India tells us that something else is also at play here. China and India have some of the highest rates of economic growth in the world and yet wealth-income ratios are rapidly rising. Simultaneously, public capital is being expropriated by private wealth.

Some assets have the potential to become valuable without actual accumulation. Writing in the initial stages of capitalism, David Ricardo recognised the unusual position which landlords occupy: they control a non-reproducible asset, which generates rents under expanded capital accumulation. These rents extract away from surplus value and get capitalised into higher land prices. Land values (rather than capital) come to dominate national wealth. His vision was partially invalidated by gains in agrarian productivity, but the histories of global wealth-income ratios testify to the strength of the underlying principle. Control over such limited resources has the potential to drive up the magnitude of wealth as much as the accumulation process (if not more) – think of real estate prices in Manhattan, San Francisco, London, Shanghai, Mumbai and Bangalore. Even with low saving rates, wealth-income ratios will rise due to the divergence of asset prices and consumer price inflation. Over the long run, capitalists may steadily accumulate reproducible capital but in the medium run there can be strong redistributions of wealth towards the rentier class.

National wealth is defined as the sum of non-financial assets plus a country’s net foreign asset position. My benchmark series for India covers the colonial period (1860-1947), the socialist experiment (1950-1980) and the more modern neoliberal phase (1980-2012). Until World War I, the Indian wealth-income ratio was very low relative to the two major imperial powers – it was around 250 per cent in India whereas it exceeded 700 per cent in Britain and France. This was the state to be expected in a wealth-poor colonial economy where accumulation had been stagnating for decades. But the capital destruction due to war related asset price shocks transformed relative wealth-income ratios. In the inter-war period (1919-1939) Indian wealth rose very fast reaching almost 600 per cent of national income while in Britain and France it fell to half its pre-war value. This phenomenal upsurge was driven by a rise in land values, which on the eve of World War II easily constituted around 70 percent of national wealth. Independence followed soon after World War II and India lost much of its most fertile land to the newly created country of Pakistan. The shocks from this turbulent period substantially drove down land prices and were accompanied by the rise of industrialisation. The development planning model in newly independent India (itself based on a Marxist capital accumulation model) raised the level of savings compared to the past and drove up the national capital stock. In effect, wealth-income ratios declined until 1960 because the importance of land fell more than the increase in productive capital. Put simply, anti-rentier policies (estate and wealth taxation, nationalisation, land reforms etc.) were able to withstand a further enriching of property owners relative to income growth. At the same time, an increasing claim on capital was being extended by the public. The rise of national savings was mostly driven by public rather than private or foreign savings. Between 1950 and 1980, economic growth was low by international standards (roughly 3.5 per cent) but it was meant to be equalising.

India then embarked on a series of market reforms in the 1980s and opened up to globalization in the 1990s. This was accompanied by a return of rising wealth-income ratios. By 2012, wealth was approaching 560 per cent – the closest it had ever been to its historical high in 1939 (600 per cent). This resurgence was due to a combination of sustained accumulation of capital stock and a re-emergence of the importance of land (almost 200 per cent of national income) following significant changes in incentives to hold private property. The summary of these trends is astonishing. Barring two of the last fifteen decades Indian wealth has nearly always moved in an upward direction relative to national income.

By itself, the rise of wealth-income ratios is not necessarily a social dilemma. But in general wealth is more concentrated than income and so a rise in wealth usually indicates more wealth inequality. Secondly, the rise of wealth is not simply a matter of accumulation but also the designation of control under the institution of private property. Whether for the production of agricultural commodities or the provision of housing services, gaining property rights to land opens avenues of wealth appreciation without any further investment. Demographic dividends and urbanisation create tremendous pressure on space and have the potential to rapidly drive up wealth-income ratios. These effects can be very strong when growth creates competition for such limited assets or when lack of growth empowers those who already possess them – rentiers and capitalists. As long as such private wealth grows faster than income, workers will remain excluded from any notion of shared prosperity. This is one of the reasons why Smith, Ricardo, Malthus and Marx spoke about class dynamics in rigorous terms. Much may still be learned from taking these classical political economists seriously.

This is an edited version of an article that first appears under a different title (“Not just r > g but r+q >> g: Piketty meets Ricardo in the long run of Indian history”) on developingeconomics.org.

Rishabh Kumar is an Assistant Professor of Economics at California State University, San Bernardino, and has worked as an Economist for the City of New York. He received his PhD in Economics at The New School for Social Research in New York, and an MA in Economics from Jawaharlal Nehru University, Delhi. His twitter handle is: @Kumar_EconIneq 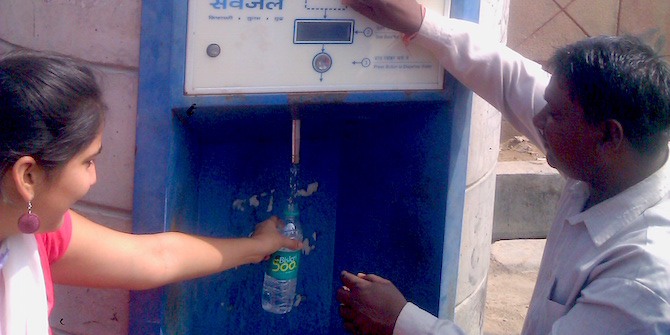