Georgie Carroll takes us on a tour of the best bookshops in Mumbai, India. If there’s a bookshop that you think other students and academics should visit when they’re undertaking research or visiting a city for a conference, further information about contributing follows this article. 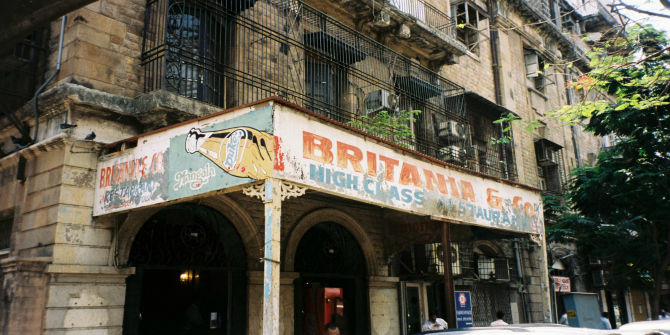 Ballard Estate in South Mumbai is made of excavated soil from the building of what is now Indira Dock. The low-lying, marshy land on the eastern waterfront was filled, flattened and formed into what is a century-old business district, owned by the Mumbai Port Trust (MPT). Its uniform neoclassical architecture inspired its description by Mumbaikars as ‘London-like’, the European-style facades flashing between the foliage of tall rain trees and gulmohars.

The Estate was designed by George Wittet, who envisaged the Gateway of India and the Prince of Wales Museum, and was part of the late-nineteenth-century British movement of Indo-Gothic architecture. Once a bustling commercial district, Ballard Estate is now relatively tranquil although some major businesses still hold their administrative branches there. After dusk it famously becomes ‘a ghost town’, thought to have something of the film noir about it – a location for smoke and chiaroscuro and jewel thieves in motorcars, perhaps.

Ballard Estate is one of the youngest parts of the city, and it reeks of the nostalgia of a fading Bombay. One of its most famous sites is the Irani institution Café Britannia, where you shouldn’t miss admiring the peeling wall tiles while tucking into a berry pulao. Ballard Estate is a place for weekend wandering now, a picturesque backdrop for shareable photos online. More recently it has become known for its festival events, which the MPT hopes will draw in more visitors. 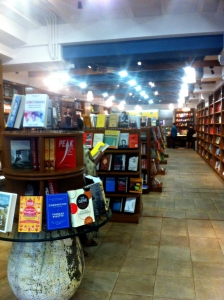 Wayword & Wise sits on Mint Road, which speaks of the history of Ballard Estate’s commercial vibrancy. Unsurprisingly, many of Mumbai’s chain bookshops have been dying off in the face of online retailers, but the indie kind promises what e-tailers can’t. Wayword & Wise was launched in 2015 by Virat Chandhok, who twenty years ago was the curator at famous bookshop Lotus, now sadly closed, in the fashionable suburb of Bandra. He curates titles for serious book lovers, presenting Vladimir Nabokov beyond Lolita, Czech literature beyond Milan Kundera, Turkish beyond Orhan Pahmuk. The pleasing poetry range features the likes of C.P. Cavafy, along with writers better known for their prose. Chandhok’s collection is living and constantly in dialogue with its customers: the owner can often be found engaging in literary conversation with buyers. There is also a good section of philosophy featuring the likes of Gaston Bachelard and Maurice Merleau-Ponty, as well as carefully considered collections on history, religion, food and the performing arts. The bookshop’s wine and cheese café offers a nice space for bookish debate. 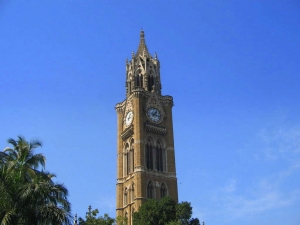 Kitab Khana, established in 2011, is a short walk away in Fort, where booksellers operate on the pavements and where the Rajabai Clock Tower rises from hot early morning cricket matches on the university lawns. Fort is also home to the famous St. Xavier’s College where scenes from blockbuster films like Kuch Kuch Hota Hai (1998) and Munna Bhai M.B.B.S(2003) have been shot. Kitab Khana has a library feel to it, with its traditional décor and inviting wooden stairs rising up to a mezzanine. It has a good selection of Indian literature in, or translated into, English, including all volumes of the Feluda stories, along with regional literature in Hindi, Gujarati and Marathi, as well as the English classics and expected world literature titles for a major bookshop. It also sells some Classical Indian literature including those published by Harvard University Press’s ‘Murty Classical Library of India’ series in Sanskrit, Pali and Old Hindi.  It has a good section on European and Indian History including titles by Ramachandra Guha and on religion with popular texts by Devdutt Pattnaik and others. It has a veg café-restaurant, Food for Thought, which is open all day every day. 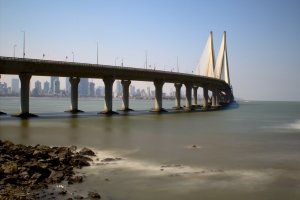 The Bandra-Worli Sea Link is the iconic bridge that has connected South Mumbai with the Western Suburbs since 2009. You can cross it to reach the bungalows and the bougainvillea of Bandra’s Pali Hill; further north you come to the affluent neighbourhood of Juhu, famous for its sprawling beach. From the recently refurbished Granth bookshop windows, you can look out across the skyline, coffee and book in hand. The bookshop has dedicated much time and energy to its interior design. It prides itself on being the largest bookshop in the city’s suburbs, and hosts a number of literary and music events. It also offers an impressively wide range of contemporary books across all categories from major publishing houses, with many mainstream fiction titles in English and from regional literature. Of Indian literature in English you’ll find R.K. Narayan’s A Malgudi Omnibus, as well as titles by Jerry Pinto and Amitav Ghosh, alongside works translated into English such as Tagore’s Gora, and Saadat Hasan Manto’s Bombay Stories. Among the best categories are art and design, art history and the performing arts. There are titles on the lives and works of European masters, on Islamic art and Indian painting including, for example, a nice volume on Raja Ravi Varma.

While in the area of Juhu, a visit to the Kapoor family’s Prithvi Theatre shouldn’t be missed, just a short drive away, where there is also a small bookshop, Paperback, with a well-curated selection of plays and dramaturgy.

Mumbai is a city with a lot of serious readers, and its most loved bookshops are those that focus on books, and not books etc. The collections are curated by serious readers too, collections which, like the city itself, are made of multiple traditions and histories. They invite you to wander and get lost in them.

Georgie Carroll is a PhD candidate at SOAS, University of London. Her research investigates eco-aesthetics in Indian poetry. She is author of Mouse (Animal) (Reaktion Books, 2015).

This piece originally appeared on the LSE Review of Books .This bookshop guide gives the views of the author, and not the position of South Asia @ LSE blog, LSE Review of Books blog nor of the London School of Economics. Please read our comments policy before posting. Thank you to Georgie Carroll for providing Image 1. Image 2 courtesy Ninad Chaudhari (CC BY 2.0). Image 3 courtesy Kumar Appaiah (CC BY SA 2.0).