In Masala Shakespeare: How a Firangi Writer Became Indian by Jonathan Gill Harris, Harish Trivedi (Former Professor of English, Delhi) finds a book that examines the similarities between India and Shakespeare. Taking the author’s understanding of the word masala (in this case meaning something hybrid, mixed or more-than-one), Trivedi explains the problems of such a comparison and literary interpretation of Indian society and culture.

This is a bemusing book: one part India, two parts Shakespeare, and three parts Jonathan Gil Harris. It follows on from, if it is not quite a sequel to, an earlier work by Harris titled The First Firangis: Remarkable Stories of Heroes, Healers, Charlatans, Courtesans, and Other Foreigners Who Became Indian (2015). Firangi is a Hindi word which derives from ‘Franks’ and is used, often in a pejorative and even hostile sense, for all white foreigners, rather as Turk was used not only in Europe but in India too for all Muslims. 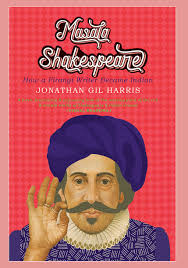 In The First Firangis, the foreigners who were Harris’s subjects were the early travellers to India, in the 16th and the 17th centuries. In the present book, Harris seeks to add to that motley crew the Great Firangi author Shakespeare, who never of course came to India, a far-off country which remained no more than an exotic speck in his peripheral vision. To this main text, Harris joins a sub-text, which in fact threatens to eclipse the ostensible main text, to the effect that he himself, who came to India in 2001 and now lives in India, has become Indian as well, and perhaps far more so than Shakespeare. In Sonnet 111, Shakespeare wrote: “…my nature is subdued/ To what it works in, like the dyer’s hand.” In trying to dye Shakespeare in an Indian hue, Harris ends up proving that his own hand is dyed even deeper.

For it turns out that it is not Shakespeare but Harris who is the self-appointed hero of the book, and he describes his own doings in the manner of an assiduous and indeed devoted biographer. Thus, on the opening page we get the following: “I watched Lagaan in July 2001 at the grand but somewhat dilapidated Chanakya Theatre in Delhi. The Chanakya seated 1,080 people…[and] my partner and I opted for the sanctuary of the [highest priced] 80-rupee balcony seats.” (3)

Almost every film and play he subsequently watches over the following years is similarly documented in terms of just when and where he did so. The relevance of these apparently trivial facts is not explained, though one may give Harris the benefit of doubt and surmise that he, with his impressive Western erudition, has kept a record of theatrical events and moments of significance in London from 1592 to 1609, like Philip Henslowe and Samuel Pepys who too documented in the 1660s each play that he went to in London, inter much alia.

Harris’s systematic play-going and film-going, mainly to watch versions of various plays of Shakespeare as adapted in India, form the narrative frame of this book. His findings are that present-day India is much like Shakespeare’s England and therefore especially suited to receive and respond to Shakespeare. However well meant, such an assertion has an unmissable Orientalist odour; it damns not with faint praise but with praise so fulsome as not to sound like praise at all.

What Shakespeare and India have in common above all, according to Harris, is that they are both always already hybridized. The word he uses for hybrid, mixed or “more-than-one,” is masala. In Harris’s view, almost everything in Shakespeare is masala, virtually everything without exception in India is masala, and that is how the two are, to tweak Shakespeare a little, “well met by moonlight.”

But this is sheer moonshine. For one thing – and it is enough to send Harris’s whole elaborate construction for a toss – the Hindi-Urdu word masala (with an Arabic genealogy, and pronounced masaala) which he uses as the keyword in the title of his book does not mean hybrid in any of these languages. The two main meanings of the word are firstly, spice (as to be found in an Indian curry), and secondly, one element or factor or constituent among several which then in plural would be  masale (in Hindi-Urdu). Here, Harris seems to have gone by – and been grossly misled by – just one kind of use of the word masala, as deployed in describing, and castigating, some commercial Hindi films.

These are called masala (or “formula”) films because all kinds of spicy ingredients are thrown into the mix indiscriminately in the hope that something or the other might work, at the cost of all artistic or even narrative coherence. Hybrid is not the word for this desperate high-risk, crassly commercial practice, as Harris insists; it is kitsch or even rubbish. Harris would have done well to look up The Oxford Hindi-English Dictionary compiled by R. S. McGregor, where masala is thus defined: “1. Raw material, materials. 2. Ingredients. 3. Spices, seasoning; a spice.” The word as an adjective means: “seasoned, spiced, trimmed, edged.” (McGregor 797) None of this supports what Harris imagines the word to mean.

In any case, he uses the word masala so frequently that he drains it of all meaning even in the sense he intends. Indian languages are masala; so was English in Shakespeare’s time. The Partition of India is masala because it resulted in two nations coming out of one (‘more-than-one,’ see?). (35-36) Romeo and Juliet has “masala lovers,” Macbeth happens in “masala time,” Hamlet has “masala ghosts,” and King Lear and The Tempest both have “masala storms” (72, 151, 202, 229). The disastrously misunderstood and promiscuously misapplied word leaves nothing unblessed by its thaumaturgic touch. “One man’s rubbish…is another man’s masala,” says Harris epigrammatically (21), and perhaps the opposite is true as well.

There remains Harris’s sentimental and even touching desire, “drenched in love for [various] oddities of Indian masala” (vii), to become Indian, , prompted by the fact that he “fell in love with India” (3) almost at first sight.  But if everything is hybrid and more-than-one, why should he want to become an Indian and just one? Is that because Indians are more hybrid than any other people, as he  claims time and again? Harris tells us in his intermittent autobiographical “interludes” that he is a Jew born in New Zealand and educated in England who taught for over twenty years in the U.S. before moving with his Indian partner to live and teach in India. That sounds already hybridized enough, perhaps with a vengeance.

One can only guess but Harris’s aspiration to become – and be taken for – an Indian may have had a deeply ironical and fortuitous beginning. As he narrates it towards the end of the book: “In 2014, shortly after I moved to Delhi [from the U.S.], I was elected President of the Shakespeare Society of India. I was an ‘Indian’ of only a few months standing, so it was hard not to feel a little like a cultural impostor.” (252)  Ever since then, possibly, he has been striving hard to allay that unease for himself and for all others.

But at that moment of his sudden elevation, no one in India  thought he was even remotely an Indian or should pass off as one. Indeed, the fact that he clearly and visibly was not worked very much in his favour. Shakespeare was a foreign writer, English was and remains a foreign language in India, so how nice to have for once a foreigner as the President of the Shakespeare Society of India! It is our own abiding colonial cringe to a large extent that made this possible, but  that should not make Harris look on himself as an impostor, feel needlessly guilty, and try and make amends by frantically trying to go native.

In any case, it is not easy to become an Indian. Notoriously, Hinduism did not until very late even have a mechanism for any outsider to convert to Hinduism; one could only be born a Hindu. Pretty much the same goes for becoming an Indian. We can’t even begin to understand why anyone should want to become what they are not, and can never be except nominally and superficially. All religions are good for those who are born into them, and so are all nationalities and ethnicities. Kipling poured scorn on highly educated Indians who he thought had pretensions to be “more English than the English,” while Indians treat non-Indians aspiring to be Indians with more indulgent scepticism.

Harris my not be fully aware that he is valued and appreciated in India for being a distinguished foreigner, a firangi, who has made India his home rather than for his well-meaning but largely unavailing attempts to try to merge. His university earns brownie points for each foreign member of the faculty it hires such as him; it helps boost its global ranking. The desire and presumed ability to pass off as someone one is not is a typically Western fancy as played out by casually disguised romantic adventurers such as Richard Burton the orientalist and Lawrence of Arabia; it doesn’t really wash. It may be best to be happy in one’s own skin. Not only the Hindus but also the Muslims of India have had some apt things to say on the matter. The nineteenth century Urdu poet Momin has a couplet that says:

How in hell can I now turn into a Mussalman!

To end by declaring an interest, I know Jonathan Gil Harris and have had a nodding acquaintance with him for years. He comes across as a positively pleasant and affable person, notwithstanding the blonde Boris mop he sports. The next time I run into him, I may recite the above couplet to him in the original Urdu, and I know he’ll enjoy the cadence and the metre with his attentive and part-attuned ear even if he cannot really follow the words. I may also tell him that we like him just as he is, so he can relax now and stop trying to be an Indian. There are quite enough of us already, God knows.

This article gives the views of the author, and not the position of the South Asia @ LSE blog, nor of the London School of Economics. Please read our comments policy before posting. Featured image: Shakespeare. Credit: Joe Hunt, Creative Commons, Flickr.