Stratford upon Avon! Everyone of us have studied/heard about William Shakespeare during our school days and it made perfect sense to pay a visit to his birthplace particularly while we are living so close to Stratford upon Avon. After a lot of debate and discussion, 9th February was frozen as the day we would make the trip. It’s not easy to organize such trips because getting everyone to be free and get together is a huge task. And the trip would take us the entire day, leaving no scope for any school work to be done that day which we all know feels like a criminal activity 🙂

So on the date, fourteen of us took the National Rail to Leamington Spa from where we had a connecting train to Stratford upon Avon which takes another 25 minutes. We got delayed due to snow on the way, which seemed like an ominous start to the journey and resulted in our missing the connecting train. However, the station authorities very kindly provided us with cabs that dropped us to the town of Stratford. The town is exactly as one reads about small towns in England. It had lots of lush greenery, small rows of brick houses and everything seemed to be almost out of a fairytale. For a fleeting minute, I was transported back to the Enid Blyton countryside stories I had grown up on and half expected fairies to be flying around with their tiny wands.

We were a big group and when fourteen adults turn into excited kids on a day out, there is bound to be pandemonium. We had a very kind self appointed leader, Aman, who took on the rather boring responsibility of head counting and ensuring that everyone was bundled together till the end of the day.  The town is small in size and one can easily cover it on foot. We decided to split in small groups and cover the whole town. I quite enjoyed the Royal Shakespeare Company, which had a lovely souvenir collection in particular. The insult chair caught our attention and despite the fact that the person in the hot seat couldn’t have jumped off the chair more quickly (thanks to the lovely insults thrown their way), each of us still wanted a turn on it. There was a small photography exhibition displayed on the top floor, which was also very interesting.

We covered quite a few of the attractions such as Shakespeare House, the other cottages, the Royal Clock Tower and the Holy Trinity Church. With the combined navigation of fourteen people, everyone managed to stay together and the town is honestly quite a difficult place to get lost in. I personally feel that a few hours are enough to cover the whole town and get back to the city. We went in the month of February and the weather conditions were not the most ideal ones to travel in. Our last stop was Patisserie Valerie where lovely pastries and coffee helped lift our tired spirits in order to pose for the mandatory picture right outside Shakespeare’s birthplace. 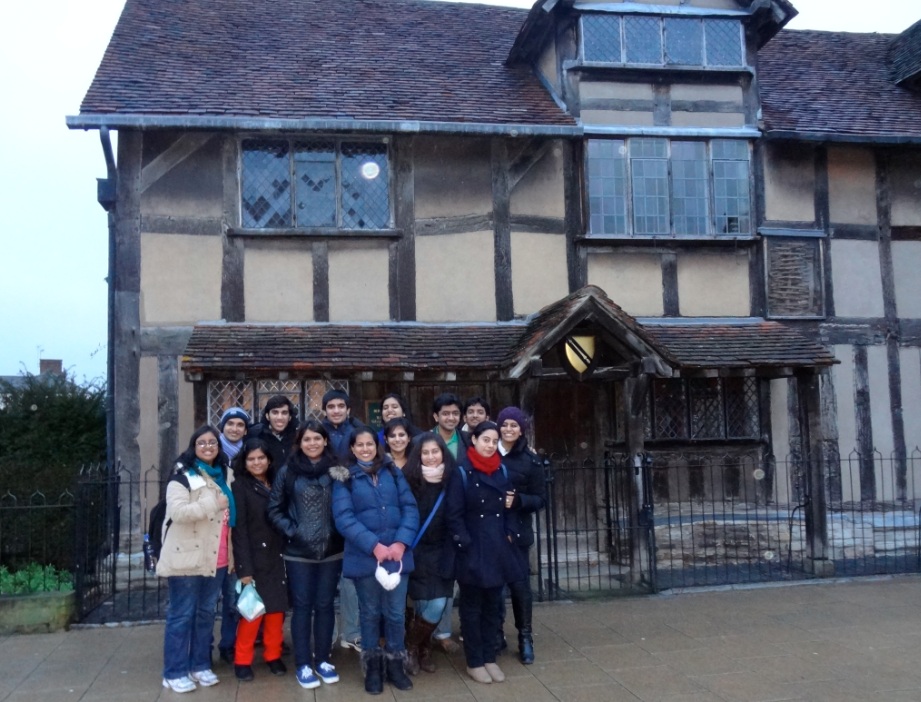 Our adventure didn’t end at the train station. The whole town seems to close at 5 pm and since we had a 9:30 pm train to catch, we had a lot of time to kill at the station. We tried moving to a couple of pubs, coffee shops, anything to beat the chill, but at 7 pm everyone decided to wait at the station only to realize that the waiting room closes at 7:30 pm. (Things couldn’t get any worse). But, we were a big group of people, and some of them are bound to have brainwaves at times like these :D. One of them suggested that we play dumb charades. Now imagine the situation: 7:30 pm; dark, gloomy, chilly night; sitting in the open and playing dumb charades at a lonely, seemingly haunted station (strictly because of the silence around and fog). 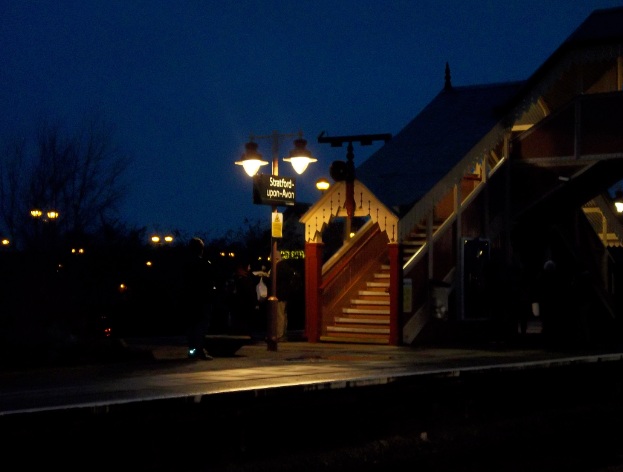 It wasn’t the best of situations to be in, but soon we were sufficiently engrossed in the game to eliminate chances of whining and crankiness. And then, we finally saw a glorious sight from a distance. It was the lights from an approaching train. Our mode of transport back to London had arrived! 🙂 It was certainly an eventful trip and not one that we are likely to forget in a hurry. However, it is also one of the most fun trips we could have made together. 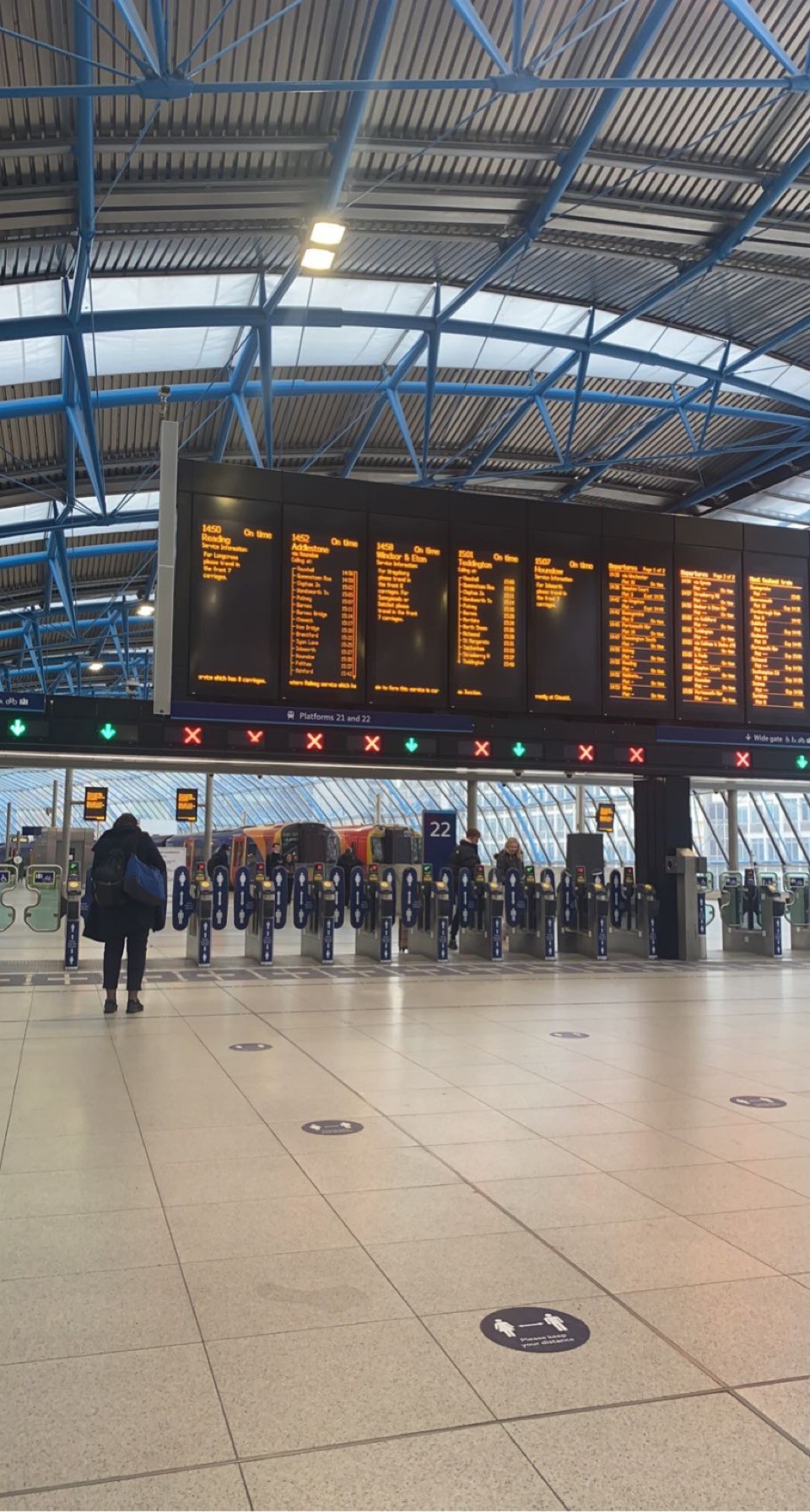 Warning: places on the map may be further than they appear

Bad Behavior has blocked 586 access attempts in the last 7 days.