The day started quite early for me; at 5:30 AM, to be exact. The Graduate Management Society (GMS) organised a group trip to The Forum, which is one of Oxford Saïd Business School’s flagship events. We were scheduled to leave from LSE’s New Academic Building at 7 AM sharp. I hurriedly brushed my teeth, got ready and rushed to LSE. Dressed in our business attire, we boarded the bus and it was en route to Oxford! 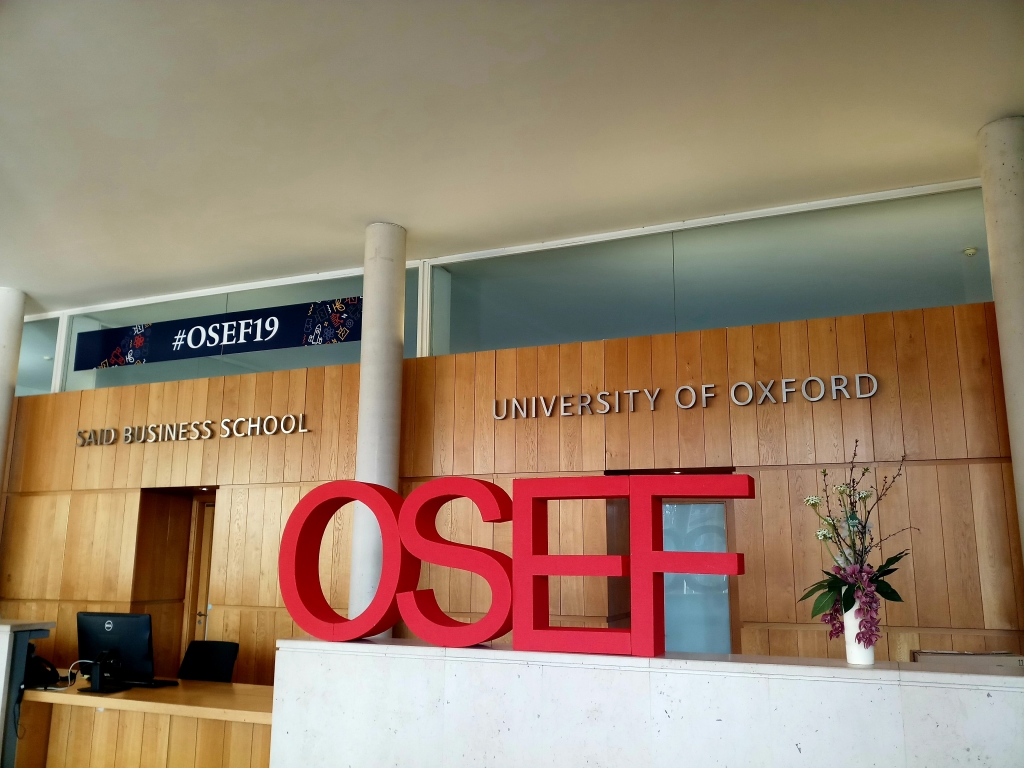 We arrived at Saïd Business School at 8:40 AM. After registration and a quick cup of coffee, it was time for our first keynote speaker. 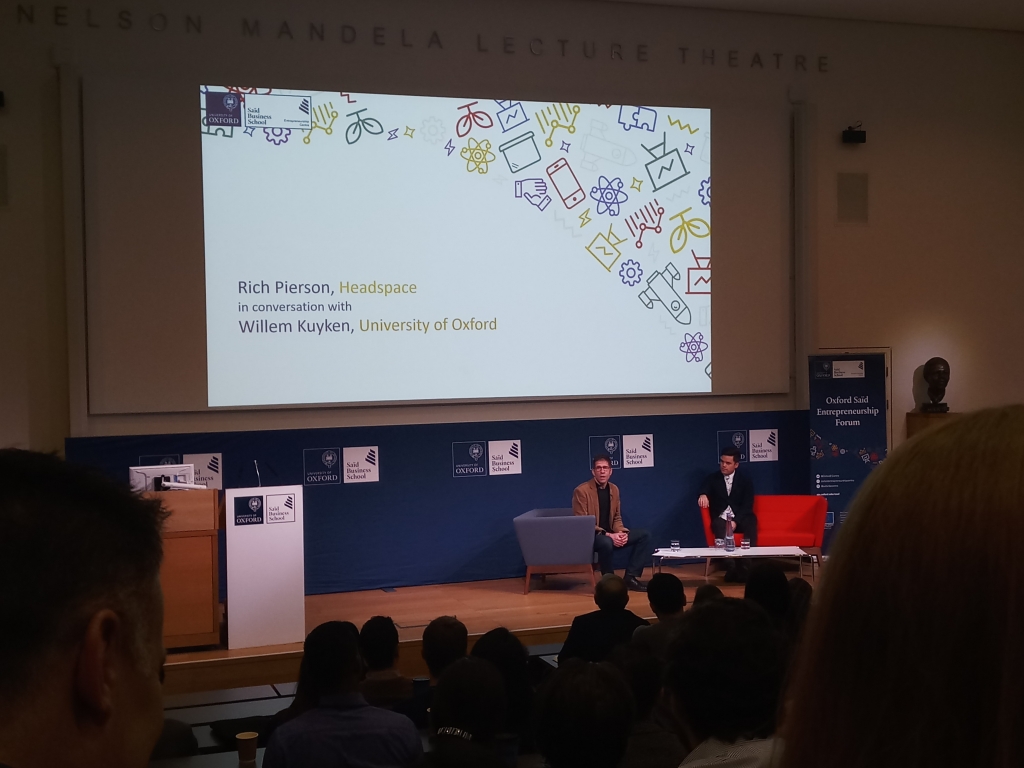 If you haven’t heard of Headspace, it is a mindfulness app that specialises in a well-tested approach to meditation. Rich Pierson spoke about his journey – from having a corporate job, getting burnt out, quitting, then starting a trainee course to become an acupuncturist, meeting Andy Puddicombe – his business partner (who was his meditation teacher at the time); starting with a small idea and then, moving on to the Headspace app that we can now find on our app stores. Rich highlighted that their journey was far from easy. He mentioned the “gift of desperation” and how he was thankful for it because it fueled his drive. In fact, the core values at Headspace are drive, courage, curiosity. He went on to speak about other things relating to the health industry and in particular, mental health; and how he expects his company to grow. It was truly insightful. 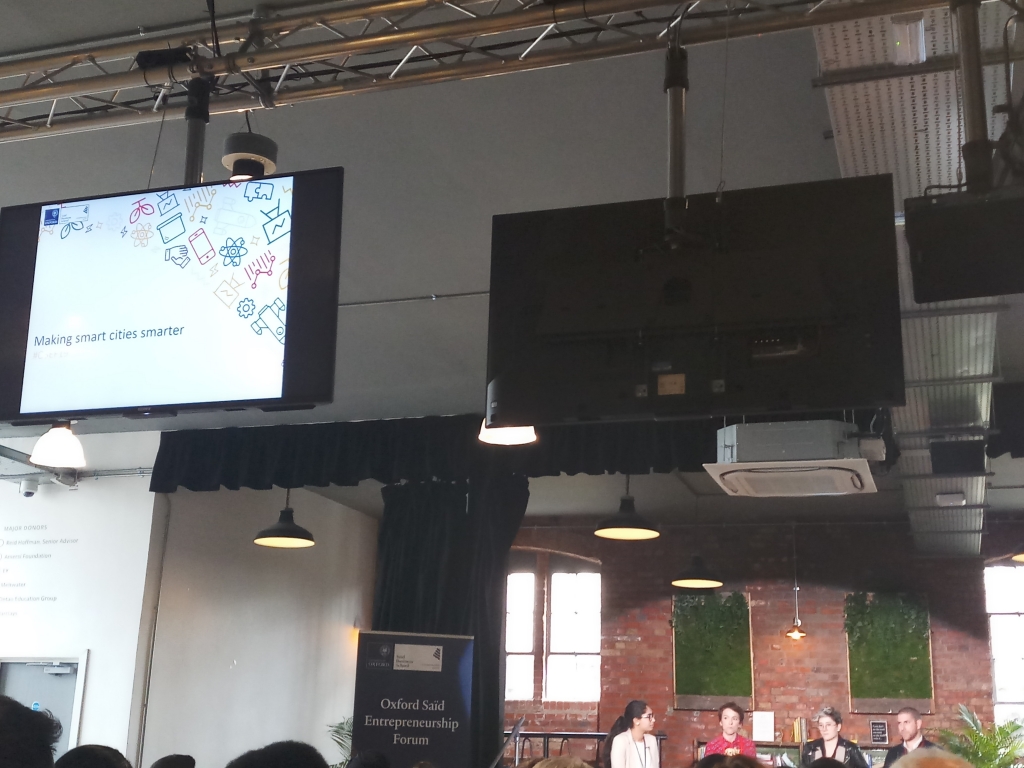 After the talk, we had a short break with snacks. Then, we were off to panel events. I decided to attend the “Making smart cities smarter” panel. The panel consisted of Eugenie Teasley (Uber, Head of Cities), Vanessa Lee Butz (District Technologies, CEO), and Amir Elichai (Carbyne, CEO). The session covered various topics, such as how collaboration and social innovation is playing an important role in building smart cities. The panellists also gave us insights into the innovative work done by their respective companies. 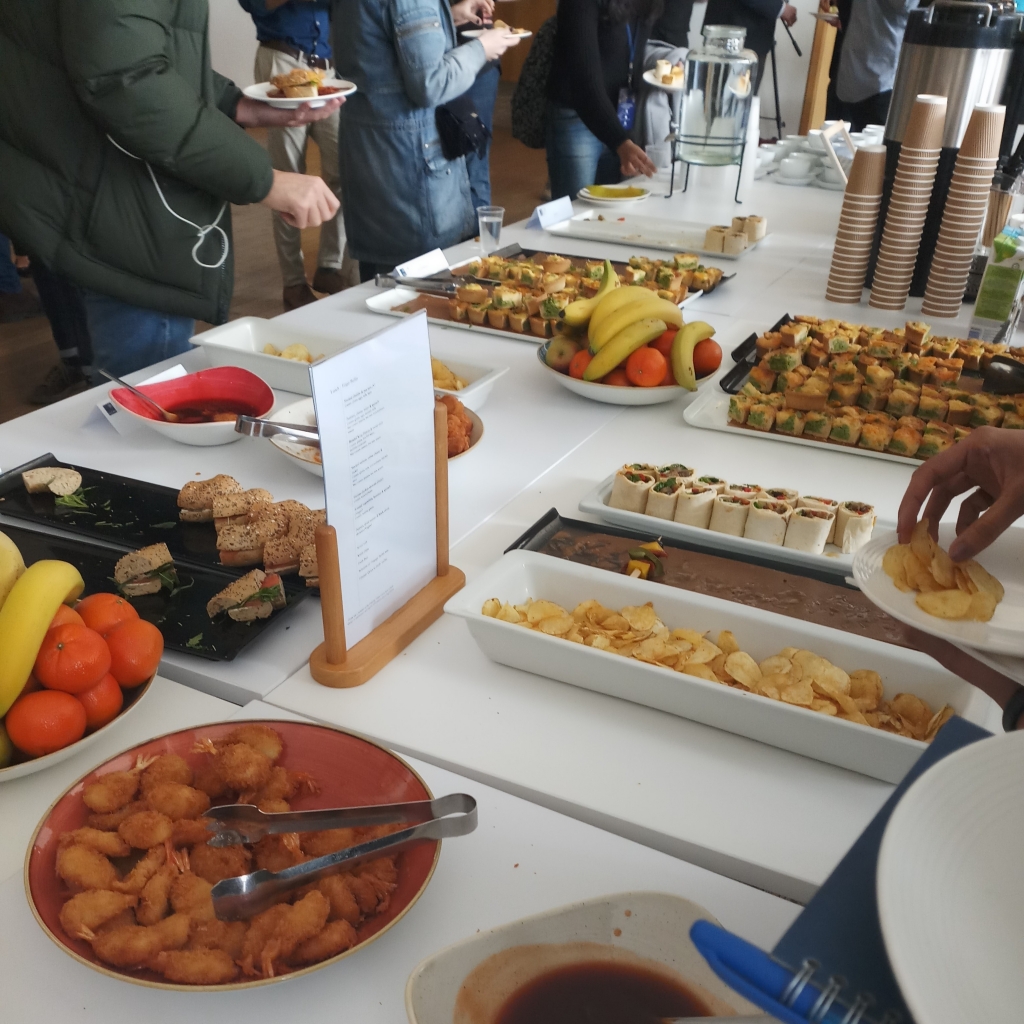 Following the panel discussion, we had a scrumptious lunch and networking session. Soon after, it was time for our afternoon keynote speaker to give us his talk. 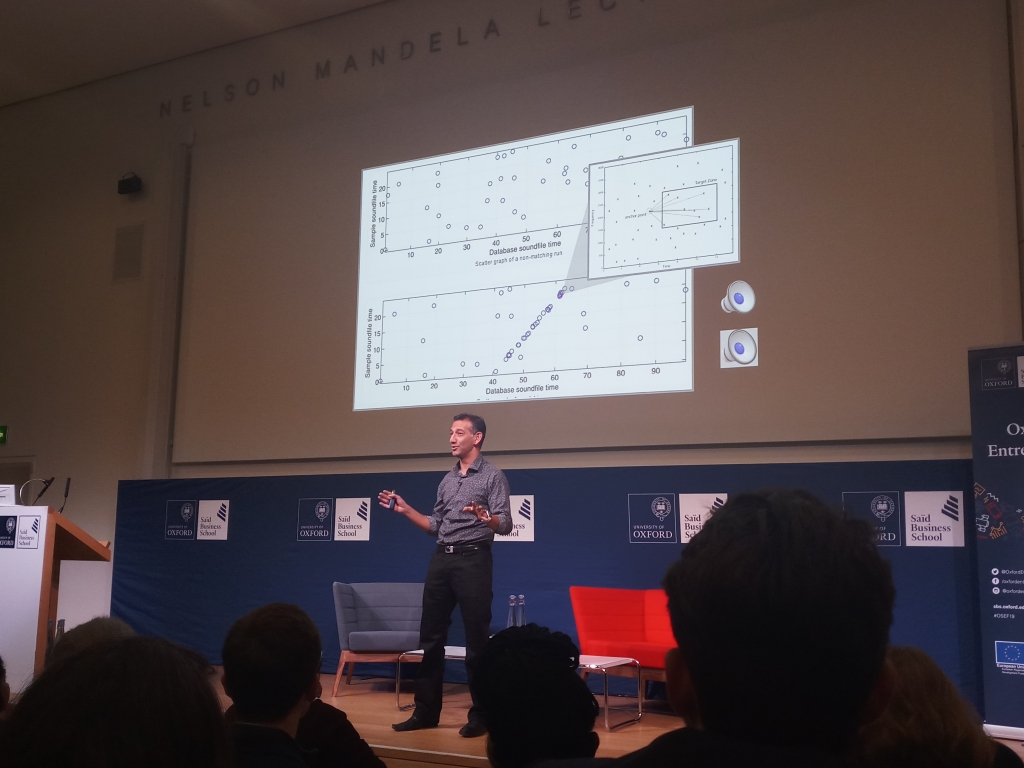 For those of you who don’t know Shazam, it is the music detecting app (where you play a small snippet and the app tells you the name and other details of the song). Dhiraj Mukherjee took us on a highly entertaining journey from his time at Dartmouth, to being a consultant, and then pursuing his MBA at Stanford – where the idea of Shazam was ‘tentatively’ formed. What started off as a passion to innovate and become an entrepreneur became a rollercoaster ride. Dhirag and his partners first struggled to define their business model, then figuring out the tech side of things; and then finally coming up with Shazam and its algorithm. He also took us through the financial struggles and other hardships that they faced until the year 2008, when due to the iPhone and the App Store, Shazam took off brilliantly. Now, it has become embedded in popular culture, with phrases like ‘Shazam it’ being normal. There is even a game show called Beat Shazam, hosted by Jamie Foxx. Overall, the talk was amazing and one of my highlights of the day. 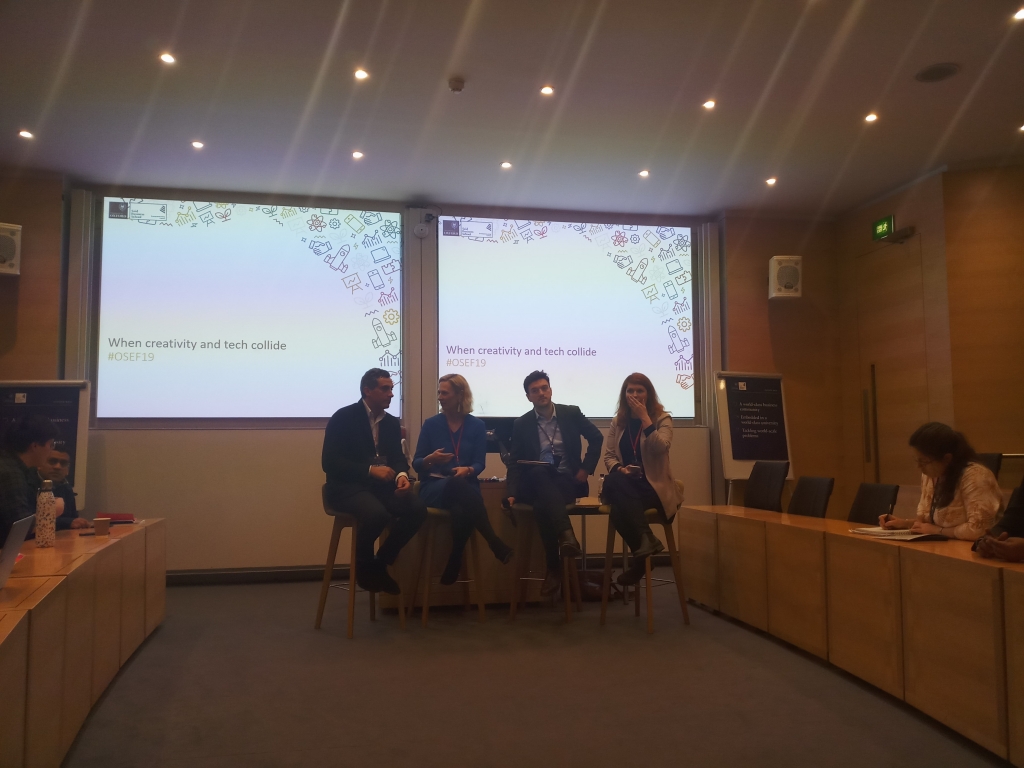 ‘When creativity and tech collide’ panel

This talk was again, followed by panel events. I decided to attend the ‘When creativity and tech collide’ discussion. The panellists were: Maria Tanjala (FilmChain, Co-founder); Robert Norton (Verisart, CEO) and Isabel Garvey (Abbey Road Studios, Managing Director). All of them are part of creative industries that have an important focus on digital innovation and tech progress. They gave us an overview of blockchains and how it is being used, an in-depth look into their respective organisations and spoke about the emergence of Artificial Intelligence and its impact on creativity.

After the panel event, it was time for some tea and snacks. Oh, and some more networking! I have to admit, it was quite fun. I met some very interesting people and had valuable conversations. 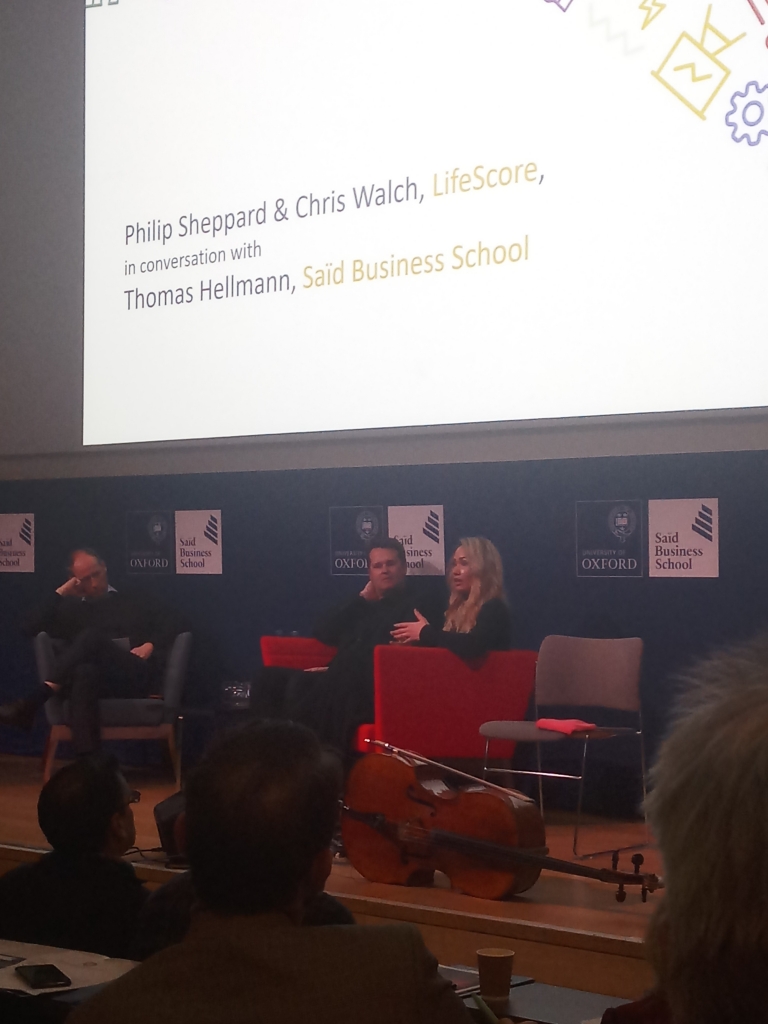 Our final speakers were Philip Sheppard (an award-winning composer, whose projects include the 2008 Olympics closing ceremonies, all the world’s national anthems for the 2012 Olympics, Rugby World Cup, Tour de France and the Montreal Grand Prix (he even composed the behind-the-scenes comic-con trailer for STAR WARS: The Force Awakens); and Chris Walch (a senior finance associate turned entrepreneur). The two of them spoke about their life journey and how they started up LifeScore. Philip also spoke about the digital innovation he is doing in the music industry and even did a performance on stage with his cello, as a demo. It was innovation at its finest.

Throughout the day, we had the opportunity to listen to different types of entrepreneurs. We got an overview of the different ways that make a start-up successful. It was an amazing and insightful day and I’d like to thank the GMS for putting this trip together.

And now, after what has been an incredibly long day, it is time to retire. The GMS has arranged for us to stay at the Holiday Inn and I’m looking forward to submitting this article and perhaps having a relaxed movie night; I see that ‘Jurassic World’ is on TV.

But I hear there’s no campus?

A day in the life at LSE: my video diary

Bad Behavior has blocked 512 access attempts in the last 7 days.