Hi, it’s Anu! I’m a BSc Geography with Economics student currently on an exchange year at the University of California Berkeley. I always knew I wanted to study abroad during my time at LSE; I wanted to experience true immersion into another culture and gain a fuller international perspective. I’m really excited to share my Berkeley experience with you!

I’ve been told that first impressions are crucial, but in all honesty it has taken time for me to warm up to Berkeley. I arrived at San Francisco Airport four weeks ago, although it feels like I have been here for much longer.

When I was imagining what my time in the US would be like, I definitely expected things to be much more similar to the UK than it actually is. The night before my flight I even jokingly told my mum “it’ll be the same as England, just with different accents!”

I could not have been more wrong.…

First things first, the city of Berkeley is nothing like London. It is much smaller, squeezed in between the mountains and the ocean on the San Francisco Bay. It is full of independent coffee shops, bars and restaurants – with not a single Pret A Manger to speak of! Though there are some Bay Area specific establishments, such as Super Duper (seriously the best veggie burger I’ve ever had!), and Peet’s Coffee.

Despite the smallness of the city, the sheer size of UC Berkeley’s campus is shocking, particularly when compared to LSE’s (1, 232 acres compared to just 120,000 square feet). Even on “Berkeley time” (aka classes start ten minutes in) I ended up having to drop one of my classes because I’d always end up being late (I had a class right before on the other end of campus). I only live a 10-minute walk away from the centre of campus, and I’ve been getting around mostly on foot. The warm weather combined with the steep hills makes walking to class a workout; something that London’s flatness and easy public transport links had not prepared me well for. UC Berkeley gives all students a Clipper card, which gives you free access to the bus services around Berkeley and to San Francisco, that comes in really handy when you’re starting to flag in the heat! 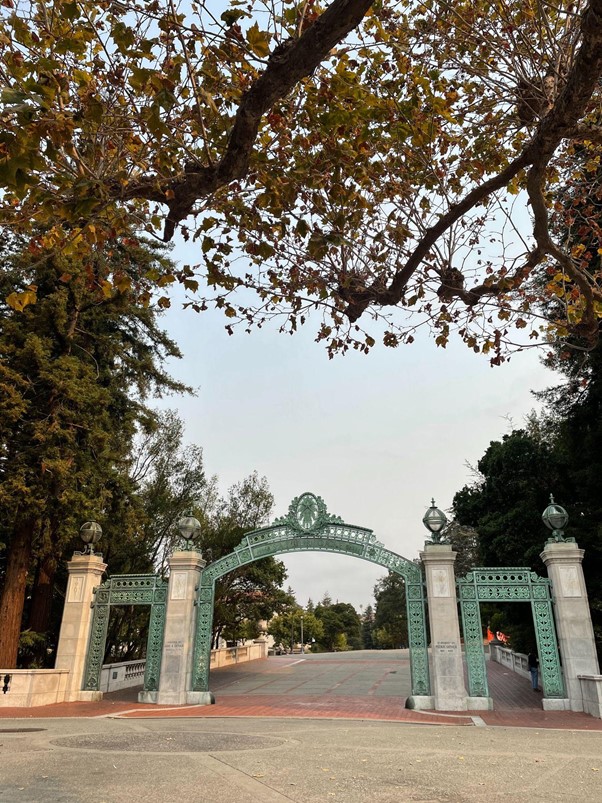 Even now, I’m still getting used to the campus and finding new places to study and relax. One thing I love about the university is how beautifully nature is integrated into the campus. I’ve always been a fan of green spaces, and London definitely offers many. But the access to large areas of grass at Berkeley feels like such a treat. Aside from the campus, the surrounding hill area around Berkeley is truly incredible. There is no shortage of places to explore, and hiking here is a big part of the culture. I thought the sunsets in London were beautiful, but they would struggle to rival the sunsets I’ve watched here. Before I sat down to write this blog, I actually watched this one at the Lawrence Hall Science Laboratory viewpoint: 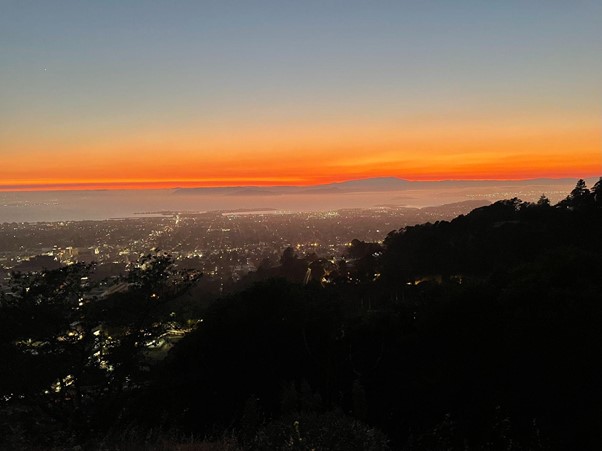 View from Lawrence Hall of Science 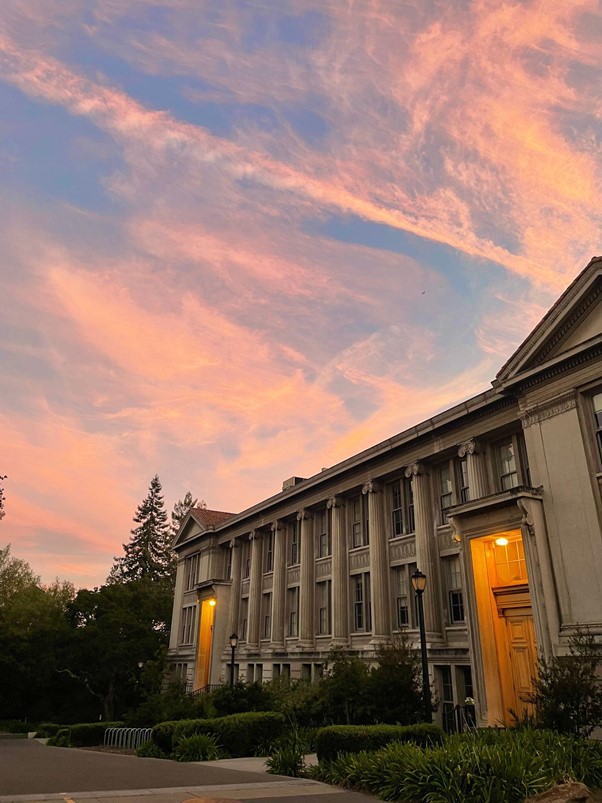 A sunset on campus

The style of teaching has definitely been a shock. Most of my professors use the Socratic method, meaning that my classes have been very interactive. There are also more assignments and tests than I’m used to – my first midterm is coming up soon! There is no reading week here, and the terms are longer (15 weeks rather than 11). This means it’s important to keep up with work as it’s easy to fall behind. It also means I fully intend to take advantage of any long weekends to explore more of the USA.

I have fourteen contact hours each week – with three hours of lecture time for each module and the remaining time for sections (similar to classes at LSE). I am taking four modules this semester, and have sections for two out of the four modules. My classes are fairly large compared to the classes I’m used to at LSE: most of them have around 100 students in total, but the sections are smaller with around 30 students.

I am really enjoying my classes, and have been able to take courses that I wouldn’t have been able to at LSE. My favourite classes at the moment include a Media Studies course (“Privacy in the Digital Age”), and a Haas Business course (“Energy and Civilisation”). All of my classes are face-to-face (except for yoga, which I opted to do virtually). This has been a shock in itself as I had gotten used to everything being virtual. It has been an adjustment, but one I feel extremely lucky to experience.

Outside of class the number of events and activities to take part in is overwhelming! Last weekend I had my first taste of American football. While I definitely enjoyed the festivities, I have to admit that the game was not especially exciting for me – the players seemed to spend more time off the pitch than on it! That being said, I did enjoy experiencing the college spirit I’d heard so much about. Cal students place a lot of value on school spirit and sporting events. It’s impossible to walk around Berkeley without seeing at least one person wearing a Cal sweatshirt. I couldn’t refrain from buying my own merchandise from the student store, which sells everything from Berkeley-themed colouring books to Hawaiian shirts adorned with golden bears. 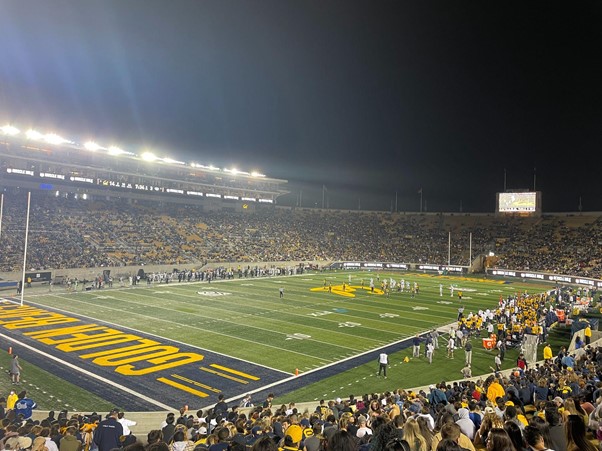 First football game of the season

During an orientation carnival event I tried funnel cake for the first time. American desserts are definitely sweeter than British ones, so if you ever get Bubble Tea (or “Boba”, as everyone calls it here) in the States I’d recommend reducing the sugar level to 30%.

My adjustment process is by no means over. I’m still getting used to the area and learning more about the campus and the city every day. There’s so much more left for me to discover, but it’s already clear that the experience I’ll gain from this year is going to be rich and exciting.

Interested in studying abroad during your degree? Learn more about the opportunities available here.

Hi, it’s Anu! I’m a BSc Geography with Economics student currently on an exchange year at the University of California Berkeley. I always knew I wanted to study abroad during my time at LSE; I wanted to experience true immersion into another culture and gain a fuller international perspective. I’m really excited to share my Berkeley experience with you! 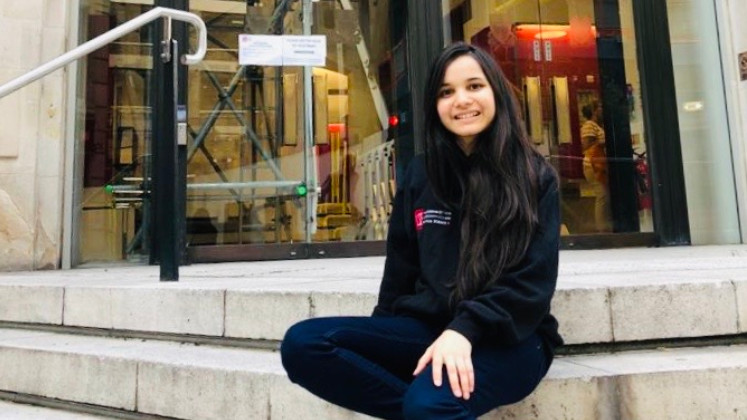 How I made the most of my time at LSE 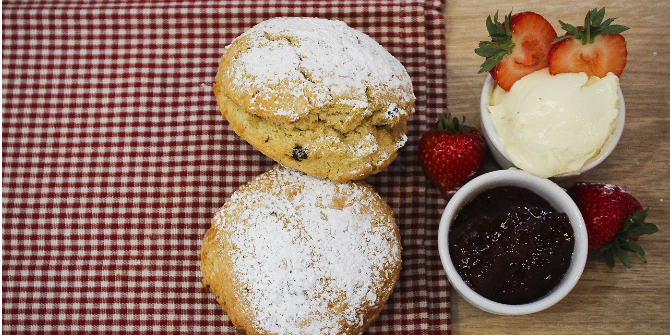 British Cuisine – time to give it a chance 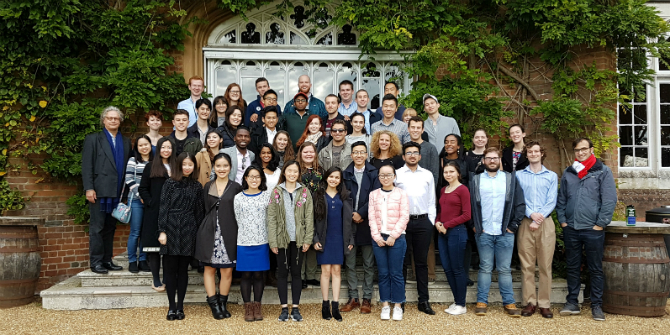 Bad Behavior has blocked 255 access attempts in the last 7 days.