Is the past as real as the present? Do dinosaurs and Pompeii exist? What about the future—is that real? Do human colonies on Mars exist one hundred years from now?

In the 1920s, the British philosopher C. D. Broad became fascinated by these sorts of questions. Like many of his contemporaries, Broad started out as an ‘eternalist’ about time. Eternalists believe that the past, present, and future are all real. Eternalism was partly fuelled by new theories in physics, developed by the likes of Minkowski and Einstein. Unifying space and time into ‘spacetime’ led philosophers to spatialize time: time became more like space.

This had interesting consequences. In space, every location is real—Sydney is as real as Beijing or New York. If time works the same way, then perhaps every location in time is real. That would make this moment in 2018 as real as any moment in 1718 or 2318. If other times are real, then perhaps time machines could let us travel there. We could travel to 1718 to meet George I or witness the founding of New Orleans. We could travel into the future, as H. G. Wells suggested, and witness the end of the human race. 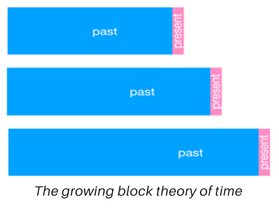 But Broad was later to reject eternalism. Instead, he developed an entirely new position, in his 1923 book Scientific Thought. Broad conceived the past as a ‘block of reality’. As new present moments come into existence, they are added to the block, and so the block grows. On this growing block theory of time, the past is real and the future is unreal.

Why did Broad believe this new theory of time to be true? I argue there are two reasons. The first stems from the direction of time, and the second stems from the nature of time.

To understand Broad’s view on the direction of time, consider a series of points—A, B, and C—on a line. These points are ordered: B is between A and C, and A is not next to C. However, they are not directional: we can move from A to B to C, or the reverse, from C to B to A.

Now consider another series of three events on a timeline: the Prime Ministerial reigns of Margaret Thatcher, Tony Blair, and Theresa May. This series is ordered and directional. We can move from Thatcher to Blair to May, from past to future, but we cannot move the other way around.

Broad describes this feature as the ‘peculiarity’ of time series and it really is peculiar. In space, there is no directionality; you can move in any direction: north, south, left, right, forwards, backwards. Yet in time, you can only move from past to future.

We might object that time doesn’t really have a direction. We might argue this apparent direction is illusory, a quirk of how we perceive the world. Perhaps we perceive direction in time because of some not-yet-understood brain process. Broad didn’t think this was satisfactory: the direction of time is too deeply rooted in our experience of the world for it to be an illusion.

If we accept that time really has direction, how do we explain it? This is where Broad’s growing block theory comes in. He argued that the direction of time is explained by the way time slices are continually added onto the block of reality. Broad writes of his theory:

[…] such a theory as this accepts the reality of the present and the past, but holds that the future is simply nothing at all. Nothing has happened to the present by becoming past except that fresh slices of existence have been added to the total history of the world […] The sum total of existence is always increasing, and it is this which gives the time-series a sense [direction] as well as an order.

Today, there are two popular views on the nature of time. ‘Substantivalism’ holds that time is real and exists in its own right, as a strange kind of substance. On this view, time is a container for events. ‘Relationism’ holds that time is comprised of nothing more than relations between events. For example, it rained ‘five minutes after’ it thundered, or the ice melted ‘two days after’ the pond froze.

If you are a substantivalist and you believe time has direction, you might try to explain it by pointing to some feature of this strange entity called ‘time’. But this option was not open to Broad, because he firmly rejected substantivalism. (At one point, Broad went so far as to describe substantivalism as ‘meaningless verbiage’.)

As a relationist, how did Broad explain the direction of time? Relations themselves don’t seem to have direction. Red is ‘darker than’ yellow, yet you can move from darker to lighter points on a line, and vice versa. Broad argued that there must be ‘something more’ than ‘mere relations’ in time, and that this ‘something more’ is the continual addition of present moments to the growing block of reality. The nature of time lies in temporal relations and the continual growth of reality. Broad developed his growing block theory because he could not see any other way to explain the direction of time.

Over the last few decades, the growing block theory of time has become increasingly popular, defended by philosophers such as Michael Tooley and Peter Forrest. Part of its appeal lies in its compatibility with an intuition many of us have about the past and future. The past has already happened, and it feels ‘fixed’. I can’t change who I voted for last year, or what I ate for breakfast yesterday. In contrast, the future hasn’t happened, and it feels ‘open’. In the next election, I could vote for Labour or the Conservatives. I could eat cereal or toast tomorrow. Unlike eternalism, where the past and future exist, the growing block theory can explain our intuition that the past is fixed yet the future is open. The past is fixed because it’s real, and the future is open because it’s unreal. Dinosaurs exist, yet colonies on Mars do not. The past is real, and the future is unreal.

This essay is based on the article ‘The Roots of C. D. Broad’s Growing Block Theory of Time’, by Emily Thomas, published in Mind.

Emily Thomas is Assistant Professor in Philosophy at the University of Durham. She’s published extensively on time and space in the history of philosophy, and she’s recently been writing about the philosophy of travel. You can follow her on twitter: @emilytwrites 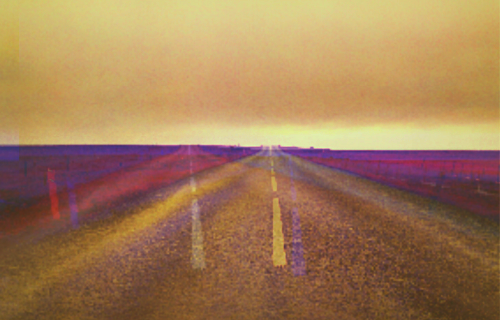