In recent years commentators have become increasingly concerned with declining election turnout across the US. The trend is nowhere more pronounced than in city mayoral elections, where turnout is frequently as low as 25 per cent. Looking at 340 mayoral elections, Aaron C. Weinschenk finds that turnout could be increased through increased electoral competition, and holding votes on the same day as national elections. He also argues that encouraging greater spending on campaigns will lead to higher levels of civic engagement and turnout in local elections.

Scholars, journalists, policymakers, and civic groups have long expressed concern with the low levels of voter turnout that characterize US elections, and nowhere is turnout lower than in local elections. Recently, the issue of low turnout has captured the attention of a number of local elected officials across the United States. Mayor Lee Leffingwell of Austin, Texas, for example, pointed out that there is a “dangerous level of disinterest in city elections.” A number of studies have shown that local turnout patterns have important political consequences. For instance, low turnout in city elections appears to reduce the representation of Latinos and Asian Americans on city councils and in the mayor’s office, skew local spending policies, and create opportunities for organized interests to influence public policy. These concerns highlight the importance of understanding what influences voter turnout in local elections.

The problems associated with low turnout have led some mayors to speculate about its causes, and a number of them have even proposed policy reforms aimed at boosting turnout in mayoral and city council elections. For instance, in his 2011 Texas state of the city address, Mayor Leffingwell outlined several potential ways to increase local turnout, including changing the date of local elections so that they coincide with elections for higher level offices and enhancing the ability of local candidates to raise campaign funds, suggesting that local candidates need to be able to raise and spend “enough money to effectively reach anyone outside the small group of people who regularly vote in city elections.” 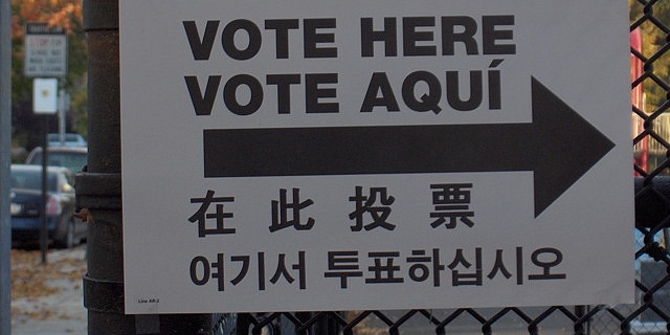 Although both scholars of local turnout and policymakers across US cities have suspected that in addition to political institutions, local electoral campaigns may play a role in explaining mayoral turnout, research on local elections has not utilized direct measures of campaign effort to investigate how much campaign mobilization matters to local turnout. In order to learn about the factors that influence turnout in US mayoral elections, Thomas Holbrook and I constructed an original dataset containing information on mayoral campaign activities (along with information on local political institutions and city attributes). In total, we gathered information on 340 U.S. mayoral elections occurring in 144 cities from 1996-2011. On average, turnout was just 25.8 percent across the cities included in our study. 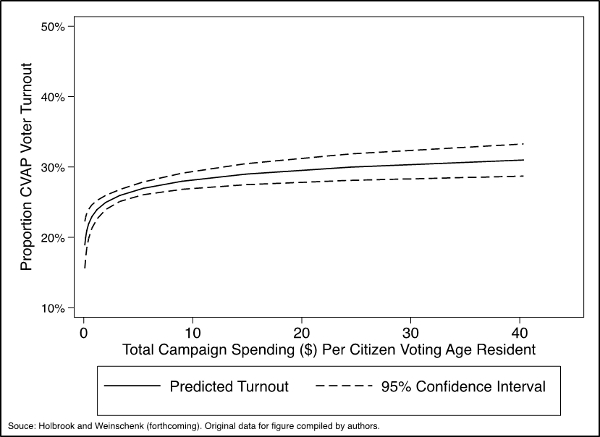 Figure 1 above illustrates the effect of mayoral campaign spending on turnout. Here, we see that there are relatively steep increases in turnout when comparing contests with hardly any spending to those with about $10 dollars per citizen voting age resident, but returns from additional spending flatten out considerably beyond this point. One of the challenges for increasing turnout in mayoral elections is that only a small percentage (about 20 per cent in our study) of contests feature $10 or more of spending per citizen voting age resident. Overall, the difference in predicted turnout between the lowest and highest spending contests is approximately 14 percentage points.

We also found that electoral competition was important to stimulating turnout. Turnout in contests in which one candidate won all of the votes (only 7 of the 340 cases in our study) is predicted to be a about 12.5 points lower than cities in which the outcome is a tie (2 cases in our dataset, due to rounding vote percent to three places to the right of the decimal point). This is an impressive effect and points to the importance of a competitive political environment in stimulating turnout. 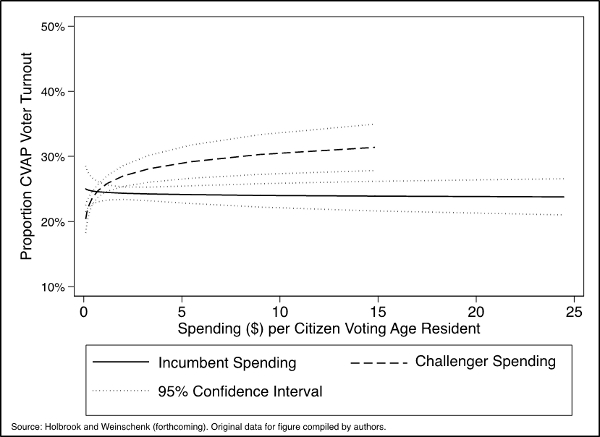 Returning to the concerns about turnout voiced by local elected officials, our analysis points to some concrete, feasible actions that we are confident would boost local turnout levels. Implementing policies to increase levels of competition and increase the amount of money spent on mayoral campaigns (especially the amount spent by challengers), switching to partisan elections, and moving mayoral elections so that they coincide with presidential or midterm elections would go a long way in increasing voter turnout. Although some policymakers have argued for less of a role for campaign spending in local elections, our data suggest that local campaign spending mobilizes voters to turnout on Election Day. In this way, spending plays an important role in fostering civic engagement.

Of course, the types of changes suggested above are unlikely to occur. Most elected officials are probably not interested in better-financed opponents or other instruments that would increase political competition. In the case of institutional reforms that result in low turnout (non-partisan and off-cycle elections), the potential ills of low turnout need to be balanced against gains that are realized as a result insulating local politics from national and partisan politics. There are clearly important tradeoffs for policymakers to consider.

September 10th, 2013|Aaron Weinschenk, Democracy and culture, Elections and party politics across the US, Uncategorized|5 Comments
Previous post Next post