Better fuel economy and steady tax rates mean that by 2015 the federal Highway Trust Fund, the primary source of road financing, will be facing a shortfall. A broad technical consensus on the solution to this problem has emerged: the current gasoline tax should be replaced by a road user fee based on the number of miles driven. Denvil Duncan and John D. Graham accept this policy conclusion. They argue that with the advent of GPS and Internet connectivity in cars, such a scheme is becoming more feasible, and would lead to more efficient travel patterns, and offer a more stable revenue stream for road construction and maintenance.

Given recent regulatory changes in federal fuel-economy standards for cars and trucks, the consensus forecast is that motor fuel taxes will not be an adequate source of dedicated funding for roadway maintenance and construction.  Many experts believe the fuel tax, currently paid at the pump by all road users, should be replaced with a user fee based on the number of miles driven. Although the road user fee triggers privacy and cost concerns that reduce its political acceptability, it has several advantages over the fuel tax. It has the capacity to generate substantial amounts of revenue, can be used to influence driving behavior in desirable ways, and its user-pay feature makes it a more equitable means of financing roads than the gasoline tax.

The federal Highway Trust Fund, which is replenished by dedicated funding from the fuel tax, is the primary source of federal financing for roads. However, the fuel tax has grown increasingly inadequate due to a combination of higher fuel economy standards and the reluctance of policy makers to change the tax rate, as shown in Figure 1 below. Recent projections by the Congressional Budget Office show that the Highway Trust Fund will run a deficit in 2015. In fact, the Trust Fund would have been in deficit sooner had it not been for over $34 billion in transfers from the General Fund since 2008.  One solution to this problem is to replace the fuel tax with a road user fee.  While our focus is the federal government, a similar case can be made that the states should replace their gasoline taxes with road user fees. 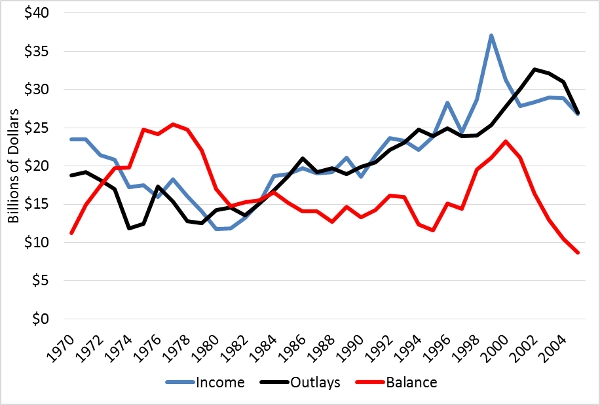 A road user fee charges each driver for the number of miles driven. The fee structure can be modified to account for vehicle weight, which is known to be one of the main determinants of road wear and tear. However, implementing a road user fee faces some challenges related to public acceptance and political support, and specific characteristics of the program may influence acceptability.

First, how should vehicle miles traveled be measured?  One approach is to use the mileage recorded by the odometer, which is a standard feature in every motor vehicle. This information could be collected through self-reporting by drivers or visual inspection by public servants. In order to discourage fraudulent reporting, public servants could – for a sample of vehicles each year – compare reported mileage with an estimate based on data from CARFAX vehicle history reports, insurance companies, auto service centers, and a driver profile. The driver profile could be maintained by the taxing authority and include information that can be used to predict mileage such as distance to place of employment.

More technologically advanced methods are feasible but come with privacy and cost concerns that reduce political acceptability. Privacy concerns are especially relevant given recent revelations of widespread spying by the federal government. However, those worries may fade as automakers build more cars with Internet and GPS connectivity and more insurance companies adopt pay-as-you-drive policies. Therefore, it may be possible – within the next twenty years – for the government to rely on the data collected by third-party entities to implement the road user fee. The most important feature of these developments is that they are driven by demand and supply in the automotive industry. Therefore, making this option available to drivers on a voluntary basis should reduce privacy and cost concerns that have plagued the idea of mandating new GPS devices in all cars.

Replacing the gasoline tax with a mileage user-fee has several advantages. First, the mileage user fee provides a more adequate and stable source of revenue for the construction and maintenance of roads. This is due to the fact that the road user fee does not depend on the amount of gasoline consumed. Therefore, the amount of revenues collected will not fall as the mileage ratings of cars and trucks improve over time.

Second, the mileage-based road user fee is more equitable than the gasoline tax when judged on the benefit principle. According to the benefit principle, a tax is equitable if its burden is distributed proportionally to the benefits received from goods/services financed by the tax. Since the gasoline tax is used for road maintenance, repairs and construction, one could argue that those who drive more and therefore consume more road services should pay more.  This feature of the gasoline tax is steadily being eroded by the rising use of fuel-efficient and all-electric vehicles. When a fee is based on the number of miles driven, it ensures that each driver pays according to the amount of road they “consume”. This is especially true if the fee structure is adjusted for vehicle weight.

Another distinctive feature of the mileage user-fee is its visibility to drivers. Because drivers are billed for the number of miles driven, it establishes a clear link between miles driven and user-fee liability. This will likely lead to more efficiency in travel patterns as drivers consolidate trips and car pool in order to reduce their user-fee liability. Although the road user fee reduces the incentive to purchase fuel efficient cars compared to the fuel tax, the environmental impact of driving is best addressed with a tax on the amount of pollution produced or on regulation of tailpipe emissions.

Finally, a GPS-based mileage user-fee also allows policy makers to address local traffic congestion.  A surcharge could be implemented for driving during peak hours in congested areas or driving on particular bridges or expressways (similar to a toll).

There is never an easy time to propose a new tax, even one that replaces an existing tax with a user fee. Fortunately, the ongoing fiscal debates in Congress may lead eventually to comprehensive tax reform.  Such a bill could include the replacement of the fuel tax with a mileage user-fee. Failure to address the looming deficits of the Highway Trust Fund will have ominous consequences:  more unrepaired roads, more bumper-to-bumper traffic and larger federal deficits as the Federal government continues to supplement the Highway Trust Fund with transfers from the general fund.

Denvil Duncan – Indiana University, Bloomington
Denvil is an Assistant Professor in the School of Public and Environmental Affairs, Indiana University – Bloomington.  His current research interests include personal income taxes and their effect on individual behavior, particularly labor supply and tax evasion. Some of his work in this area explores the impact of tax-induced behavioral responses on income inequality. He is also interested in international tax mimicry and the effect of tax policy on economic growth.

John Graham – Indiana University, Bloomington
John Graham is Dean of the Indiana University School of Public and Environmental Affairs. He founded and led the Harvard Center for Risk Analysis (1990-2001), served as administrator of the OMB Office of Information and Regulatory Affairs from 2001-2006, chaired an interagency task force on automotive industry regulation, and was Dean of the Frederick Pardee RAND Graduate School at the RAND Corporation in Santa Monica, California (2006-8). He is the author of nine books and hundreds of scientific articles on risk, technology, regulation, and politics.