Even in the Internet age, film is still an incredibly important source of entertainment, and a significant informer of opinions. But do films enhance or detract from American’s already negative views of government? Looking at the top grossing films from 2002 to 2009, Michelle Pautz and Megan Warnement find that films generally have a mixed view of government with more negative depictions than positive. However, films portray individual government characters, such as, police officers, soldiers, and politicians, in a much more positive light.

Widespread disdain for government seems readily explainable given the sluggish economy and increasing partisanship in Washington, D.C. As Charles Goodsell reminds us, “…Americans are taught throughout [their] lives, from hearth and home on through school and career, that government is a sea of waste, a swamp of incompetence, a mountain of unchecked power, an endless plain of mediocrity”.  The follow-up question invariably becomes: what are the sources of these negative opinions?

Narrative forms, especially film, can significantly impact perceptions and stereotypes about government.  Since the birth of the cinema in the 1890s, through the nickelodeon era, to the emergence of cinemascope, and the now ubiquitous multiplex seemingly on every corner, film reaches more Americans than other forms of narrative entertainment (e.g. theatrical productions, novels, etc.). According to the Motion Picture Association of America, 1.34 billion movie tickets were purchased in 2010 in the U.S. and Canada and this does not account for the number of movies watched at home or in other venues, such as pay-per-view or television.

To examine portrayals of government in film, we selected the top ten box office grossing motion pictures in the United States from 2000 to 2009, as these are the ones most likely to have been seen by the majority of cinema-going Americans. Of the 76 films, 91 per cent had at least one government character and more than 400 government characters were identified. 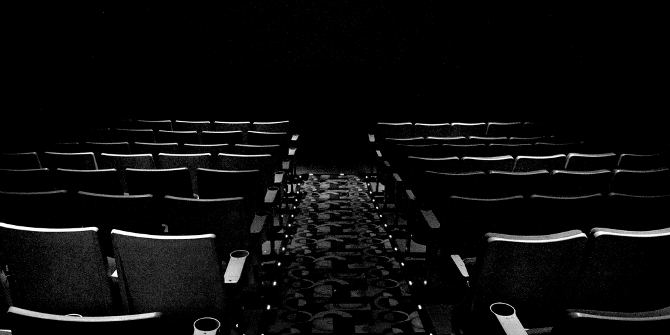 In terms of the 431 government characters, there was an array of types of characters, with the most common being teachers, followed by leaders of fantasy worlds and members of the Central Intelligence Agency.  Fifty-six per cent of civil servants are depicted positively with only 30 per cent depicted negatively. This contradicts past research that suggests that Hollywood reinforces public’s already poor opinion of government. The difference with our study is that the focus is on the individual civil servants, and at this level, they seem to be portrayed in a positive light.  For example, consider Abigail Chase in National Treasure: Book of Secrets who works for the Smithsonian and is portrayed as intelligent, dedicated, and even a capable treasure hunter.

Figure One: Depictions of bureaucrats, police officers, and soldiers in top grossing films from 2000-2009 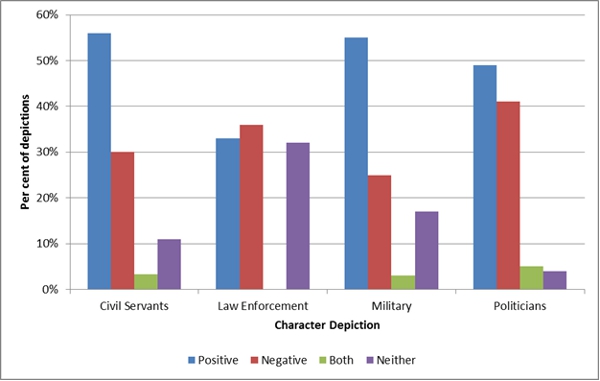 As shown in Figure One, above, not surprisingly 54 per cent of the military officials are depicted positively with only 25 per cent negatively depicted. Interestingly, 49 per cent of politicians are depicted positively while 41 per cent are depicted negatively. Queen Amidala, also known as Padme in Star Wars Episode I: The Phantom Menace is a politician that is shown in a positive light. However, to do this, the Queen is depicted as two people – a servant girl in disguise and also Queen Amidala. It is the servant girl, Padma that provides the positive depiction through her compassion and kindness towards young Skywalker – not Queen Amidala.

It is interesting to note the differences in the general depiction of government in contemporary films while the portrayals of individual government characters are more positive.  Indeed, these findings might contribute to the ongoing discussions of how Americans detest government, but seemingly re-elect the same leaders.

Megan K. Warnement – North Carolina State University
Megan K. Warnement is a doctoral candidate in public administration at North Carolina State University.  Her primary area of research is the public policy process specifically related to disaster policy and the role of focusing events in relation to policy change and learning.  She can be contacted at mkwarnem@ncsu.edu.