Evidence from Chicago shows that a summer jobs program for youth can reduce violent crime arrests by 51 percent.

Common wisdom is that jobs reduce crime, but the research evidence to support this is far from compelling. To investigate the connection between employment and crime, Sara Heller and the University of Chicago’s Crime Lab used a randomized control trial to offer disadvantaged Chicago youth summer jobs. They found that while the program led to a small drop in summer school enrolment, it led to fall of 51 percent for violent crime arrests.

“Nothing stops a bullet like a job.” In a city like Chicago, where 65 youth under the age of 21 were shot in July alone, this popular saying sounds like a common sense formula: give youth jobs to slow the tide of violence.

The rationale seems clear. Work provides income, job skills, connections to employers, information on how schooling matters in the labor market, and something to do besides hang out on the street corner. Yet the research evidence on employment programs has been far from compelling, and upon reflection, even the theoretical case isn’t clear cut. New income could be spent on goods like drugs or alcohol that can encourage crime. Jobs keep youth busy during work hours, but most crime happens on nights and weekends. And connections to the workforce might pull youth out of school; one of the more consistent findings from studies of intensive training programs is that youth earn more GEDs but fewer high school diplomas – which may do more harm than good.

So is the common wisdom that jobs reduce crime simply an urban legend? A new randomized controlled trial from the University of Chicago Crime Lab suggests otherwise, finding that a summer jobs program for disadvantaged Chicago youth cut violent-crime arrests by an astonishing 51 percent. 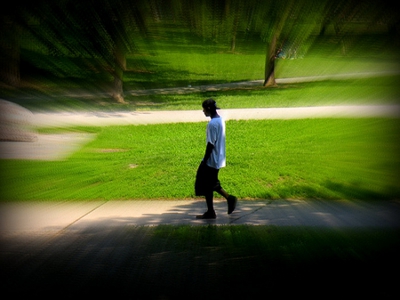 The program, called One Summer Plus (or Plus for short), offers youth a summer job, which minimizes the conflict between work and school. It provides 14- to 21-year-olds living in high-crime, high-poverty neighborhoods with part-time, minimum wage employment for seven weeks, along with a job mentor – an adult to help youth learn to be successful employees and to navigate barriers to employment (transportation, family responsibilities, conflicts with supervisors, and so forth). And perhaps most importantly, the program also addresses one of the reasons youth get into trouble: automatic, intuitive decision-making.

Anyone who has ever interacted with an adolescent knows what these quick (and sometimes disproportionate) responses look like. It’s not hard to imagine how such automatic reactions could cause trouble in certain situations, like when interacting with a supervisor or facing a conflict with other youth. The program aims to teach youth how to change their behavior in these situations by using an approach based on cognitive behavioral therapy (CBT) principles. CBT teaches people to recognize and analyze how their thoughts and beliefs lead to certain behaviors, and how to slow down that often automatic process to make more reflective, rather than reflexive, decisions. In order both to foster program engagement and to improve how youth interact with their environments in the longer term, Plus makes a CBT-based curriculum part of the job for a subset of the youth.

Importantly, City policymakers didn’t just offer this program; they also partnered with our research team at the University of Chicago Crime Lab to learn whether it works. The program was oversubscribed (1,634 applications for 700 slots), so just like a clinical trial in medicine, we ran a lottery to fairly allocate slots. We also used the lottery to decide whether youth received either a job alone or a job plus CBT in order to test the difference between program types. For now, the effects aren’t significantly different. So we pool the two groups together in what follows, though we are keeping an eye on the difference as we collect more data.

Unlike many evaluations, which compare those who show up at the door to some comparison group that might differ in any number of ways, the lottery means that any post-program differences between the treatment and control groups can be convincingly attributed to the program itself. Given that there is basically no convincing evidence on the link between summer jobs and crime, this is first-of-its-kind, “gold-standard” evidence.

Applicants were recruited from 13 public high schools with students at high risk of violence involvement. Study youth had missed, on average, 18 percent (about 6 weeks) of the school year before the program, and about 20 percent had been arrested before the program started. They also lived in neighborhoods where over 30 percent of households were below the poverty line and 19 percent of adults were unemployed.

Not surprisingly, participation rates suggest that these youth really want to work. Seventy-five percent of youth offered the program participated, and 90 percent of participants completed the full 7 weeks of the program. Outcomes were measured using administrative records from the Chicago Public Schools and Chicago Police Department, covering through 9 months after the start of the program.

Figure 1 (which, for experiment wonks, reports instrumental variables estimates of the effect of participation and the control complier means) shows that while 10 percent of the control group enrolled in summer school, only about 6 percent of Plus participants did so. It is perhaps not surprising that when offered paid work, youth attend summer school less, although it is not yet clear whether this decrease will have any long-term effects on schooling outcomes. We find no significant differences in grade retention or failure to re-enroll the following school year (nor in fall GPA or attendance, not shown). 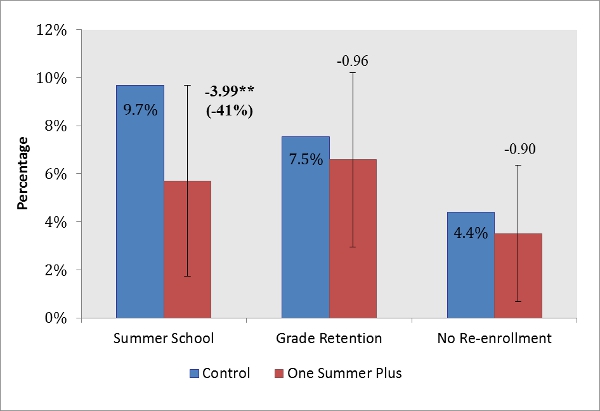 On the other hand, we find an enormous proportional decrease in violent-crime arrests. As shown in Figure 2, participants experience 3.7 fewer arrests per 100 youth than their control group counterparts – a decrease of 51 percent. We find no differences in other types of crime.

Figure 2 – Effect of Participation in One Summer Plus on Arrests 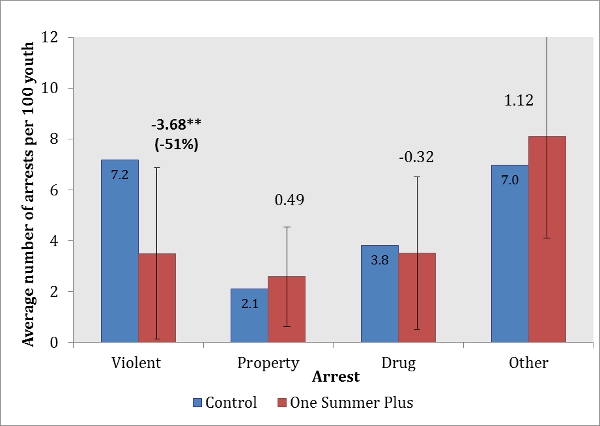 Cutting violent crime in half over a 9-month period is a pretty remarkable accomplishment. One important follow-up question we might ask is whether the social benefits of reduced crime justify the costs of the program (about $3,000 per participant). Because our results are from a relatively short follow-up period, it is too early to complete a full benefit-cost analysis. However, there is no question that violent crime is hugely costly to society. If the decrease in violent-crime arrests persists, the program benefits may eventually outweigh program costs – especially if the decline in summer school enrollment continues to have few measurable impacts on future schooling outcomes.

Other key outcomes contributing to program benefits will also take more time to develop and measure. This includes future employment, which is most likely to occur in later summers or after high school. We will continue to track study youths’ longer-term schooling and crime outcomes, as well as their future labor market participation through Illinois Unemployment Insurance data. We are also running another experiment this summer with a harder-to-reach population, targeting justice-involved youth who are likely to have much higher baseline crime rates.

Though there is much still to come, this study has nonetheless generated some of the first convincing evidence that summer jobs, along with CBT-based programming, can, in fact, make crime rates plummet. In a world with so little evidence about how to improve the life outcomes of disadvantaged youth, this is no small finding.