With the recent of exposure of intelligence gathering by government agencies, public trust in government has suffered yet another blow. But are the levels of public trust in government reflected by trust in specific agencies? Using the Department of Homeland Security (DHS) as a case study, Scott E. Robinson, Xinsheng Liu, James W. Stoutenborough, and Arnold Vedlitz find that members of the public make judgments about the trustworthiness of individual agencies that can differ from their feelings of trust in government. They also find that those that pay closer attention to issues of homeland security trust the DHS to a greater extent.

Continued revelations about the scope of government intelligence gathering, including programs whose existence were previously denied, come at a time of dwindling trust in the US government.  Strident opposition to the governing Democratic Party compounds this lack of trust, and as a result, many wonder whether we are facing a crisis of trust in government and its agencies.  Much of what administrative agencies do requires the voluntary compliance of individuals.  This need leaves many of their leaders wondering about whether a crisis in trust could interfere with the agencies’ abilities to pursue their missions.

Our research focuses on the dynamics of trust in government – specifically trust in individual administrative agencies like the Department of Homeland Security (DHS).  We find preliminary evidence that the public makes assessments of specific agencies, which are not explainable entirely by their general assessments of the trustworthiness of government, and that these assessments reveal interesting patterns of granting and withholding trust. 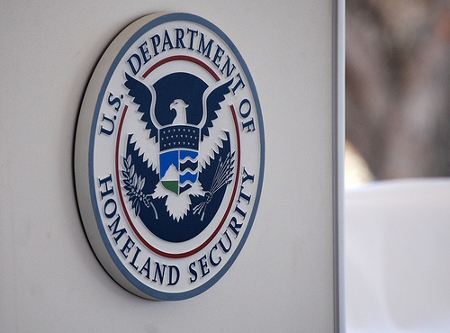 Declining trust in the US government has been a concern for decades.  Most research indicates a cyclical pattern reaching a low level of trust in the Watergate era of the mid-1970s – and at levels quite similar to where we find public opinion today.  For the most part, analysis has focused on trust in the government as a whole.  Survey questions focus on reports of how frequently one trusts people in “government” to do the “right thing.”  This level of abstraction is consistent with the orthodox view that the public does not hold nuanced, consistent opinions – especially on matters of policy.  Where there was any degree of targeted analysis, survey questions would assess opinion related to the US president as a policy-maker or the US Congress and US Supreme Court as institutions.

To illustrate our argument that different agencies have different trust profiles, we have chosen to focus on the USDHS.  As part of a project for the USDHS’s Domestic Nuclear Detection Office, we conducted a national public opinion survey of US residents.  This survey included questions about respondents’ attitudes on homeland security policy, assessments of trust in the US Department of Homeland Security (USDHS) and other agencies, assessments of trust in major political institutions, and basic demographic information.  We used these survey responses (totaling over a thousand nationally-representative respondents) to assess whether general trust in political institutions accounted for the variability in reported trust in the USDHS.  We found that it did not.

Not surprisingly, a respondent’s level of trust in the president and Congress does significantly correlate with the respondent’s level of trust in the USDHS.  However, other factors are still important, even when accounting for this general trust.  Specifically, we found that political ideology was related to reported trust (though partisan identification was not a significant part of the models that included both ideology and party identification).  Conservatives were the most trusting of USDHS, with self-identified moderates being more trusting of USDHS than liberals.  Interestingly, religiosity was also significantly related to trust in the USDHS – a finding we would like to explore in more detail in future research.

Most interesting in relation to our core research question was the finding that a respondent’s reported level of attention to issues related to homeland security was strongly related to their reported trust in the USDHS.  Figure 1 illustrates this relationship. 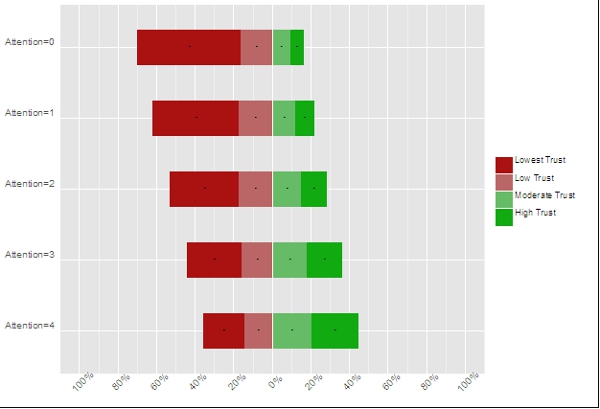 These results have implications for both the USDHS and for the study of trust in government.  For the USDHS, the people who pay the most attention to issues of homeland security are also the most trusting of their work.  This is a positive sign for the agency.  More generally, the results suggest that members of the public do hold opinions of specific agencies – not just general attitudes about government as a whole.  Trust in a homeland security agency (USDHS) is related to a policy-domain specific attitude (attention to homeland security issues).  This research opens up many new opportunities for the study of trust in government.  Now we have reason to investigate the relationships between other agencies and specific attitudes relevant to their policy domains.  There is reason, as well, to study whether stated trust in an agency affects behavior.  Does, for example, trust in the USDHS make it more likely that you will act on USDHS recommendations like travel advisories, evacuation orders, and the like?  We are only scratching the surface of what we can learn about trust in administrative agencies.

This article is a shortened  version of the Journal of Public Administration Research and Theory paper “Explaining Popular Trust in the Department of Homeland Security”.

Scott E. Robinson – University of Oklahoma
Scott E. Robinson is the Henry Bellmon Chair of Public Service and Associate Professor at the Department of Poltiican Science at the University of Oklahoma. His research focuses on the management and politics of public agencies and the dynamics of public policy, with special attention to emergency management and administrative networking.