In its opposition to the Affordable Care Act, the Tea Party is not defending the ideals of the founding fathers, but subverting them.

In its opposition to the Affordable Care Act, the Tea Party is not defending the ideals of the founding fathers, but subverting them.

The U.S. government was set up with a system of checks and balances that would ensure that no one part of government would have an excessive amount of power. In light of the current government shutdown, Ethan Ilzetzki argues that there is no constitutional impediment to the U.S. Congress passing a budget, only the refusal of Republican House Speaker John Boehner’s to allow a clean Continuing Resolution to go to a vote, which a majority of the house would be likely to support. Boehner’s reticence is almost entirely down to the influence of a minority of Republicans from the Tea Party- the type of factional influence that the founding fathers were greatly concerned about.

Former U.S. House Speaker Newt Gingrich outlined, in a Financial Times op-ed this weekend, a long historical context for the current government shutdown. The article is erudite and a fascinating read, but largely irrelevant to the current political barriers to re-opening the U.S. government. 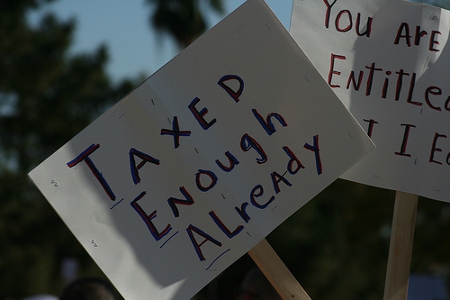 There is currently no such impediment to passing a budget in the U.S. The Senate passed a budget, supported by the President, which would receive a majority in the House or Representatives as well, if Speaker John Boehner brought it to a vote. This budget, coincidentally, differs from the one supported by the Speaker only in removing the tangential demand that the implementation of “Obamacare” be postponed.  There is a simple solution to the budgetary mess that is entirely consistent with the will of the people and the constitutional checks and balances, of which Gingrich speaks: Allow an up-or-down vote on a budget “clean” of the repeal or postponement of the Affordable Care Act (ACA).

Speaker Boehner’s reticence to allow such a vote is not a courageous defence of the centuries-old Constitution, let alone the millennium old Magna Carta, but rather the decade old “Hastert Rule”, named after then speaker of the House Dennis Hastert (see earlier blog post on this topic here.) By this “majority of the majority” rule, a Republican speaker of the house shall not bring to a vote any legislation that is not supported by a majority of his own party’s representatives. This convention has no constitutional basis. It is not based on congressional rules, as is the filibuster in the Senate. The rule was ignored on numerous occasions by Speaker Hastert himself.

The Hastert rule is not a constitutional check and balance, but rather a tyranny of a small minority—one of the greatest fears of the founding fathers. Obamacare is a case in point. After significant debate, the ACA was passed in 2010 in both houses of Congress and signed into law by the president. The bill even obtained the supra-constitutional 60-vote supermajority required in the Senate, due to Republican threats to filibuster. The law was deemed constitutional by the Supreme Court last year. There is no doubt as to the constitutional legitimacy of the law. In contrast, House Republicans have attempted to overturn the law more than 40 times to no avail. There is no majority and no constitutional case for its repeal. But a minority in the House is has artificially linked the repeal or postponement of the ACA to the budget. In doing so, it is holding the economic health of the entire US—perhaps world—economy ransom until the bill is repealed or postponed.

Republican congressional behaviour is contrary to American constitutional spirit in another respect. The founding fathers were gravely concerned about the emergence of political factions. James Madison writes in Federalist Paper no. 10:

Among the numerous advantages promised by a well-constructed Union, none deserves to be more accurately developed than its tendency to break and control the violence of faction… By a faction, I understand a number of citizens, whether amounting to a majority or a minority of the whole, who are united and actuated by some common impulse of passion, or of interest, adversed to the rights of other citizens, or to the permanent and aggregate interests of the community… If a faction consists of less than a majority, relief is supplied by the republican principle, which enables the majority to defeat its sinister views by regular vote. It may clog the administration, it may convulse the society; but it will be unable to execute and mask its violence under the forms of the Constitution.

Madison is acutely aware of the possibility of a faction, such as the Tea Party, attempting to hijack the common good for its own interests. But the republican principle wherein a majority can prevent this minority faction from undermining the common will should prevent such an outcome. Unfortunately, Madison could not forsee the extra-constitutional methods now employed by House Republicans. The Tea Party is not defending the ideals of the founding fathers, but subverting them.