Two weeks ago on 1 October, the 2010 Patient Protection and Affordable Care Act (ACA) began implementation, despite the government’s shutdown due to disagreements between the Republican and Democratic parties over its funding. Richard B. Saltman looks at the two opposing moral narratives over the ACA: one which focusses on the program’s health benefits, and a second which argues that the ACA represents a fundamental political and bureaucratic threat to the continued decentralized governance and economic future of America. Past experience with similar  clashes between completely different moral narratives  indicates  that the US may well be in for a long-term war of political attrition over the ACA.

From a European perspective, the current firestorm in the United States surrounding the start-up implementation of the 2010 Patient Protection and Affordable Care Act (ACA) seems inexplicable and, to some, unconscionable. Why would citizens of any civilized country be so resistant to meeting such a basic human need as health care for the oft-repeated number of 46 million uninsured?

In actual fact, many things about the 2010 ACA are much more complicated and fraught than they seem – and certainly not as straightforward as what most European reporters, happily ensconced in their regular Capitol Hill bars, are reporting back to their readers. Indeed, going well beyond the usual confusion that typically accompanies the introduction of large social programs, in the United States today there are two completely different narratives about what this legislation seeks to do and how well it is capable of doing so.  Each of these two opposite narratives sees itself as a moral crusade, and each viewpoint is held by something approaching half the citizenry. 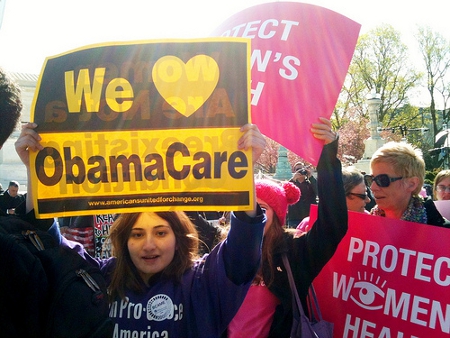 Rally in support of the Affordable Care Act in front of the US Supreme Court in Washington DC. Credit: LaDawna Howard (Creative Commons BY)

One narrative (similar to that portrayed by most European correspondents) is a story exclusively focussed on a clear public health imperative: the long-overdue expansion of the thus-far-shamefully-inadequate US welfare state to millions of citizens desperately in need of publicly funded services. In this viewpoint, reflecting 20th Century European Social Democratic philosophy, the 2010 legislation was a great political step forward for the country as a whole, and any short-term hiccups in its implementation are well worth the major human benefit it generates.

Americans who have adopted this first moral narrative see only good things in the ACA. They trumpet that it is projected to cover 30 million people, that children can stay on their parents policies until they are age 27, that prevention is mandated in all new insurance policies, that (private) insurance companies must cover pre-existing conditions, that Medicaid will be expanded to millions of low-income inhabitants, and a large number of other coverage expansions. This viewpoint on the 2010 ACA is the single sole voice that one hears in the US today from all elements of the national and state Democratic Party, and also from Democratic Party house organs such as the New York Times and the Washington Post. To those who get their news from so-called “mainstream” sources, the only possible view of the ACA and its supporters is entirely heroic, and the position of those who question or oppose its implementation is viciously condemned as primitive and barbaric.

The second moral narrative is rooted in the core constitutional values of American society, reflecting the British Liberal (Locke, also Hobbes) voices that influenced Thomas Jefferson and the signers of the Declaration of Independence,  and the French philosophes (Montequieu and Voltaire) that guided the design of the 1789 US Constitution.  Those who hold this second moral narrative  (and, sorry to report, they are not mostly Southern white bigots, nor are they predominantly uneducated religious fundamentalists – both distortions propagated widely by the Democratic Party media and its European acolytes) view the ACA as the end of the Great American Experiment in decentralized self-rule and democracy.

This second group of citizens sees the ACA as imposing centralized federal control over 20 percent of the economy – something never foreseen nor allowed under the founding documents of the country. They see both the health insurance and the strict provider performance sides of the act as imposing federal bureaucrats (much unloved in large parts of the United States as an alien presence) between individual citizens and their doctors. Regarding those who lack insurance, these adherents note (mostly correctly) that under existing federal law (TEFRA from 1988 and others), all acute patients who present themselves to any American hospital must be treated regardless of insurance status, and that there is an extensive health care safety net that incorporates a system of indigent care hospitals and county-run ambulatory health centers. 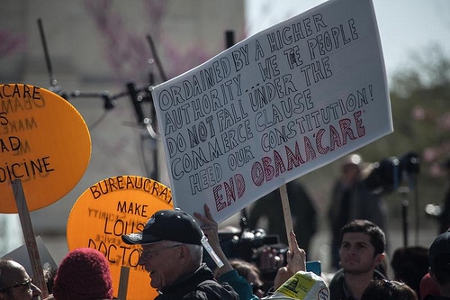 Those who view the 2010 ACA from this second perspective further worry about the consequences of  burdening an already (post-2008) badly weakened economy with major new health-related regulations and regulatory controls, both inside the health system (for health care providers) and in the general economy (small employers in particular face new and expensive administrative requirements). They also point with indignation at an enormous number of special exemptions that federal officials have given to favored labor, Congressional staff, and other special groups to help them blunt the otherwise large financial impact of the new ACA rules.

With implementation beginning on the 1st of October, these citizens now believe that their worst fears are being realized.  In the US health sector, premiums for millions of middle class individuals who already have health insurance are doubling, tripling and worse (a serious problem conveniently ignored by most European correspondents). Costs for new insurance provided by the ACA also appear to be much higher than promised.  In a recent report from the state of Illinois, 21 of the 22 health insurance policies on the Cook County ACA health insurance exchange with the lowest premiums require an up-front deductible of at least $4000 for a single person and $8000 for a family. Beyond this explosion of premium costs (which the Obama Administration continues to deny),   there has been, after 3 years of preparation and some $640 million in  IT contracts, a disastrous technical failure to function by the federal government’s ACA enrollment websites since their debut on 1 October.

Economically, the arrival of implementation has led a considerable number of American employers, especially in service sectors such as restaurants and hotels, to both reduce the number of hours of their employees to 29 per week (the ACA defines a full time employee who must be provided insurance as someone who works 30 hours a week), and to scale back or stop all new hires. Multiple large national corporations have announced that they are following just such an employment policy, which in turn reduces overall employment and forces employees unwillingly onto part-time schedules and lower incomes.

Worst of all, from the perspective of adherents to the second moral viewpoint, is the vast new debt that the ACA’s subsidies (for families up to annual  incomes of more than $90,000 ) and operating costs is expected to create. This from a federal government that already owes more than 100 percent of GDP in existing debt, and, with over $90 trillion in unfunded liabilities for existing welfare-state entitlement programs (you read that correctly – 6 times current annual GDP), is already careening toward Argentinian-style bankruptcy before several trillion for Obamacare over the next 10 years get added into the federal debt mix.

Thus, from the viewpoint of this second moral narrative (and its media outlets like the Wall Street Journal), the ACA is not primarily an issue of providing health insurance. Quite differently, it is viewed as representing a fundamental political and bureaucratic threat to the continued decentralized governance and economic future of the American republic. This in turn leads these citizens to the unshakeable conclusion that the ACA should be immediately defunded by Congress, and that current health care needs, while important, need to be handled in a completely different and far less bureaucratic and expensive manner (which however they are still unable to adequately specify).

As students of Vietnam-era history in the United States will recall, clashes between two completely different moral narratives tend to be bitter, and often to spill over into direct physical confrontation. While that thankfully has not yet occurred,  this historical insight explains why many American citizens get very nervous when the sitting President of the United States characterizes his Congressional opponents as “enemies,” and on national television calls them “terrorists” and “hostage-takers”.

It’s not at all clear where the process goes from here. The dilemmas surrounding the ACA are part of a clear pattern of other large increases in federally obtrusive action that upset long-held practices in federal-local relationships.  The Bush Administration’s “No Child Left Behind” 2003 education act has turned public school teachers into federal data slaves (typically 70 percent of their working time is spent performing bureaucratic tasks); the National Security Administration now claims authority to listen to every telephone call and to read every email; and the Internal Revenue Service illegally harasses and seeks to financially penalize citizens who donate to the opposition (Republican) political party. Whether the combined impact of these other federal intrusions will affect the outcome regarding the ACA remains to be seen.

Ultimately the crucial factor for the implementation of the 2010 ACA may be that passage of the bill in the Congress was (intentionally) achieved without a single idea or a single vote from the opposition party. Thus there were no compromises in its formation, and thus there is no common ground between the two moral imperatives that fuel the current antagonists. The likelihood therefore is for a long-term war of what one hopes will be only political attrition.