We must stand with Somalis who have been speaking out against the savagery of Al Shabaab.

Last month, the Somali terrorist group Al Shabaab attacked the Westgate Mall in Nairobi, killing 61 civilians. Karima Bennoune, who has conducted research in the Somali-American community in Minneapolis, argues that to truly defeat groups like Al Shabaab, we must support those who stand up to them and oppose their recruitment efforts. She finds that those who have tried to counter the efforts of Al Shabaab have sometimes been ostracized by some in their own communities and let down by state and federal officials. She writes that rather than stereotyping and stigmatizing all Somalis, we need to support those who speak out against Al Shabaab.

There are no words adequate to denounce the Al Shabaab terrorists who attacked the Westgate Mall in Nairobi on the day of a children’s cooking competition. They practiced a kind of terror-apartheid, telling (some of) the Muslims in the building to leave before victimizing the others.  Ultimately, they killed more than 60, including poets, pregnant women and aid workers.  People of Muslim heritage everywhere should condemn this Al Qaeda-style massacre – and promote the defeat of its authors. In fact, many have done just that, though more need to follow suit.

I recently carried out three years of research among people of Muslim heritage who have taken a stand against jihadism for a new book entitled “Your Fatwa Does Not Apply Here: Untold Stories from the Fight Against Muslim Fundamentalism.” For this project, I interviewed nearly 300 individuals from 30 Muslim majority countries, including Somalia.  Despite the shameful tactic of sorting out some of the Muslim hostages at Westgate Mall, the primary targets of Muslim fundamentalist armed groups have in fact usually been Muslims.  Those wrongfully claiming to carry the flag of Allah have killed hundreds of thousands from Afghanistan to Algeria.

Unfortunately, it is much easier for terrorists to be noticed than their stalwart opponents.  If you blow something up, you make the news – if you dare to stand up to those who do, it is much more difficult to be heard.  To successfully rout groups like Al Shabaab, we must change that.

During my travels in 2011, I was fortunate to meet Somali-Americans in Minneapolis who tried to counter the efforts of Al Shabaab to recruit a small group of young people from their city.  Across the street from the Towers, a hardscrabble apartment complex that is the center of “Little Mogadishu,” I met Abdirizak Bihi.  Bihi’s studious 17 year-old nephew Burhan was recruited by Al Shabaab in 2008, spirited to Somalia and turned into “Little Bashir,” then killed when he tried to come home.  Director of the no-budget Somali Education and Advocacy Center, Abdirizak Bihi has since been vocally denouncing both the recruitment, and the prevention failures of U.S. and Somali-American institutions, such as the Abubakar As-Saddique Islamic Center where he believes his nephew was radicalized while attending a youth program.   In addition to the mosque, he blames state and federal officials for failing to do more to combat poverty in his community.  Given Bihi’s own lack of financial means, he has to be creative.  To counter Al Shabaab’s efforts to sway other disaffected youth, he organized a Ramadan basketball tournament in 2010 with very few financial resources.

For his efforts, Bihi said he was ostracized by the Abubakar As-Saddique Islamic Center’s leadership with whom he previously had good relations. “[O]ne day we called on the imam to meet with the families. He did not show up. Unusually. Then, we see on Somali TV: There is the imam, calling us infidels and tools of the infidels, saying, ‘These families were trying to destroy the mosque.’ ” This was in sharp contrast to Bihi’s own vision of what he was trying to do by exposing the Al Shabaab recruitment drive: “Save the religion I love from a very small number of extremists.”

Another person trying to do that is Imam Sharif Mohamed of the Dar al-Hijra Masjid, located across from the Towers.  When I visited him at his mosque, he stressed that very few youth had been recruited from a very large community.  Nevertheless, the Imam was concerned and aware of his own responsibility.  “We need Imams like me to say that this is against our religion. We need to say it loudly.”

He publicly condemned the first Al Shabaab recruitments, saying, “This is wrong, this is not part of our religion. Anyone behind this is a criminal.”  After one suicide bombing in Somalia, the Imam denounced it in a public lecture, explaining that “We, the Somali people, were Muslim before Al Shabaab.”  He believes that representatives of the militant group monitored his talk.  Subsequently, he received “nasty” phone calls from “people saying that I’m not a good Muslim.”

During my stay in Minneapolis, I learned of the protest organized after “Somalia’s 9/11”—the December 2009 suicide bombing carried out by a Somali from Denmark. He targeted a medical graduation ceremony in Mogadishu, killing twenty-two, including the female minister of health, Qamar Aden Ali, who was trying to improve hospital conditions. Disgusted, a hundred Somali-American demonstrators, including Ali’s brother, rallied in the Minnesota slush. But such stories do not go national or global, and they should.

I also met Somali American community worker Abdirahman Mukhtar, who came to the U.S. as a 17 year-old refugee with the educational level of a 9 year-old, and went on to graduate from the University of Minnesota where he was president of the Somali Student Union.  He expressed frustration that the suicide bombers make headlines whereas those like him – the success stories – are relatively unknown.  “They don’t talk about the Somali youth who came here not knowing any English and are teachers now.  They don’t talk about single mothers running businesses.”  Staunchly condemning the crimes of terrorists, he also detailed the pressures many in the community felt when they weathered the subsequent FBI investigations.

The Westgate horror offers a stark reminder that the international community must face up to the grim realities of jihadist terrorism, and effectively counter efforts to recruit to its banner in many countries.  This requires vigilance and a lack of equivocation.  However, we must also recognize the many who have risked everything to stop this misguided jihad, and avoid stereotyping.  Rather than stigmatizing all Somalis, it is time to support those who have been speaking out against the savagery of Al Shabaab. 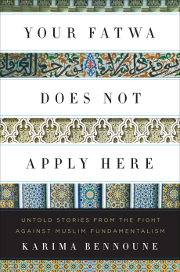 Karima Bennoune will be speaking at the LSE Event ‘”Your Fatwa Does Not Apply Here”: the human rights struggle against Muslim fundamentalism’, to promote her new book, on Wednesday, 23 October. Click here for more information.