Despite Edward Snowden’s revelations, we are nowhere near Orwell’s vision of totalitarian dystopia envisioned in ‘1984’.

This year has seen the staggering revelations of spying by the National Security Agency on targets both domestic and international. But do these programs now mean that we live in a surveillance society akin to that prophesized by George Orwell in his novel ‘1984’? Robert Colls looks at the protagonists of both narratives – the NSA’s Edward Snowden, and the novel’s Winston Smith. He argues that both are similar in their ordinariness, but Snowden, unlike Smith, is now not alone in his efforts to uncover and overturn state snooping.

“There was of course no way of knowing whether you were being watched at any given moment… but they could plug in your wire whenever they wanted to.” (George Orwell, Nineteen Eighty-Four, 1949)

We can imagine Orwell, hands in pockets, strolling across the vast glinting car park of the NSA headquarters at Fort Meade, Maryland. He adjusts his Ray Bans to survey two massive blocks of black plate glass set in a square. He takes out his journal and writes that Fort Meade reminds him of a giant version of the Kaaba shrine in Mecca. He doesn’t know why he knows this but likes the thought. Then he sees Winston Smith leaving the building to shuffle (varicose veins) his way across the lines of baking autos before reaching the far corner and Julia, who waits. They sit in the battered Nissan. Being afraid to speak, they whisper. Orwell, you should be living at this hour.

A medium ranking, 30 something year old man works on programmes concerned with gathering global information and using it in the interests of the state. Although he is an agency insider and enjoys the modest state privileges that derive from that, he comes to the conclusion that ‘The People’, in whose name he does these things, are not its beneficiaries but its victims, and that for all its talk of freedom and truth the state is intent on deceiving them. The man wants to admit his rebellious thoughts and reveal the deception but knows that by doing so he is going to make the rest of his life difficult, not to say short, and there will be no going back. He does it all the same. He has no accomplices, except his girlfriend. The world has yet to decide what will happen to him. 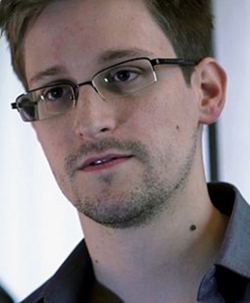 Here’s my point: Winston Smith and Edward Snowden are ordinary guys. You might say geeky-ordinary. But they had access to what we do not have access to, and came to believe that the job they were doing was not ordinary but extraordinary, and was not only wrong, but pointless. They did not know why they were doing it, or for whom, other than for security itself – a dead and pointless thing locked inside dead and pointless lives.

In Nineteen Eighty-Four Winston is obliged to hide in order to write his own thoughts and he and Julia have to look out for microphones hidden in the bushes. Edward Snowden on the other hand has not seen a piece of paper in years and we can be pretty sure that he has never had to bug a bush on behalf of the CIA. Instead, he sits before giant computers designed to engorge and decrypt the world’s information by bulk trawling internet servers and undersea cables. Tapping his keys, this slightly serious young man could target anyone he pleased – even the President he says, if he had written authority to do so (but from who?). He leaves no one in doubt that in slightly less serious hands this infinity of tapping could disfigure not only other people’s lives but other people’s countries too. 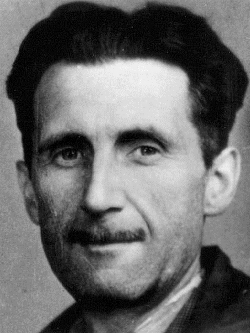 Orwell did not predict this. The United States in 2014 is not Oceania in 1949. There is no Big Brother for a start, and there is no plan (that we know about) to shrink the language, police the universities, close The New York Times, arrest Congress, deny science, falsify history, exterminate opponents, confiscate property, and abandon law and due process. ‘The War on Terror’ has made some very bad calls over the past ten years, but no matter how hard America’s ultra left or ultra right scream, the United States is a long way from Fascism or Communism or any kind of totalitarian dystopia. In Nineteen Eighty-Four no one dials a single telephone number let alone trawls a billion. The central device in Winston Smith’s world is not the phone but the telescreen. You see only what the party wants you to see. They, on the other hand, can see you whenever they please. Winston works in a monstrous pyramid while Snowden works for a PRISM, but as yet (as far as we know) there is nothing anything as murderous or delusional in Snowden’s world as there is in Winston’s.

The decisive difference is that Snowden is not really alone. So complete was Orwell’s vision of totalitarian power – and reach – Winston and Julia have no allies or means of making allies and in the end do not even have each other. Broken down into their own selves and their own selves into tiny psychotic fragments, they are left to rot. Snowden must feel like this at times but in fact he is not short of supporters, some of them quite powerful although in the face of American diplomatic pull, all of them quite unreliable as well. For all the fuss over Mrs Merkel’s phone, it’s still not clear how far the friends and allies of the US will take their objections. Shamefully, Mr Cameron has not joined the clamour. When the British Foreign Secretary assured the British people that all those who had nothing to fear had nothing to fear, he even managed to come up with a little Orwellian nightmare of his own.

After tipping his secrets Edward Snowden left Hawaii for Hong Kong on 20 May, arriving in Moscow on 23 June. There he remains. Orwell would have enjoyed the joke of Putin’s Russia as the voice of America but in truth Snowden has kicked open a hornets’ nest and, although popular opinion appears split and Capitol Hill hasn’t exactly swarmed to his defence, there can be little doubt that he has some very serious and very buzzy hornets on his side. Winston Smith had to sneak into the ghetto in search of supporters (totally without success it has to be said) but Snowden has never lacked important people willing to justify his position. When the New York Times, Der Spiegel, The Guardian, the American Civil Liberties Union, and some very influential legal and political opinion, including that of former President Jimmy Carter on the left and libertarian lawyer Bruce Fein on the right, and influential Democrats and Republicans like Patrick Leahy and Jim Sensenbrenner in the middle – when they and head of US Intelligence James Clapper all voice their various and diverse levels of support for a debate started by a man whom the other side calls an out and out traitor, then you know that unlike Winston Smith, Edward Snowden will not be a traitor forever. The 9 December statement by the giant American information companies is just as significant. Apple, Google, Microsoft, Facebook, and the rest are American brands as well as American corporations. Money counts.

Orwell spent his life loathing intellectuals and state technicians like Edward Snowden. He was sure they would betray the people. Well, Orwell did not always get it right and in this particular matter there can be no doubt that – as the cliché goes – if he was alive today the greatest political commentator of the 20th century would be supporting the young American.

For Edward Snowden recognized two great Orwellian truths; first that liberty depends on millions of private lives kept private. As a fully paid-up non-deceived realist, Orwell would have argued the difficult case as to the point at which state secrecy should end and private life begin. Second, Snowden recognized that the War on Terror is no war and the quicker we drop the impossible abstraction of it all the better. Far better that we stick to what is ordinary: ordinary law, ordinary war, ordinary security, ordinary guys. Far better too that we stick to ordinary presidents. Mr Obama should remove the little badge from his lapel and revert instead to that which we all assumed to be the case anyway – that when it comes to patriotism, ordinary presidents no more and no less than ordinary Joes don’t need a badge to prove it.

This article first appeared at the OUP blog.

Robert Colls – De Montfort University
Robert Colls is Professor of Cultural History at De Montfort University, Leicester. He was born in South Shields and educated at South Shields Grammar Technical School and the universities of Sussex and York. He has held fellowships at the universities of Oxford, Yale, and Dortmund, and with the Leverhulme Trust. His latest book, George Orwell: English Rebel, published in th UK in October, and will be available in the US in January 2014.