Last week, Bill Bratton was sworn in as New York City’s police commissioner, as part of the administration of new mayor, Bill de Blasio. David Halle, Andrew A. Beveridge, and Sydney Beveridge, take a closer look at Bill Bratton’s policy success in reducing crime, in both New York and Los Angeles, through the use of the COMPSTAT program and its successors. They write that, now that he has returned to New York, Bratton’s challenge will be to keep crime rates low while reducing the widespread hatred of the police among black residents that has been created by ‘Stop & Frisk’ policies.

Incoming New York City Mayor Bill de Blasio has just chosen Bill Bratton as the city’s Police Commissioner. Bratton returns to the top post he occupied from 1994 to 1996 where he played a critical role in police reform in New York, and then as Los Angeles Police Commissioner from 2002 to 2009. Bratton’s stint in Los Angeles is a key reason why community-police relations there seem in better shape than New York’s. Bratton achieved this in Los Angeles while also presiding over a massive drop in crime. It is this apparent ability both to reduce crime and improve community-police relations that will now be tested in New York where outgoing mayor Bloomberg and Police Commissioner Raymond Kelly argue that their Stop and Frisk policy, which critics argue has alienated many in the black and Latino community, is vital for keeping crime low. How did Bratton get his Los Angeles results? For sure the reasons that crime has plummeted in both cities to levels not seen since the early 1960s are a complex mix, from changing police tactics to long-term demographic shifts to the ebbs and flows of drug epidemics. Still, Bratton introduced the famous COMPSTAT program in interestingly different forms in both cities, and this is one key reason for the differences in community-police relations. COMPSTAT uses geographical mapping of crime to make strategic decisions about officer deployment, and sets police division benchmarks for crime reduction. Under the NYPD version of COMPSTAT, each division captain was basically responsible for crime trends and for formulating a response in his or her police area. Performance was noted in monthly, central command staff meetings, but what was noted was primarily crime trends, and how to deal with these was left to local commanders.

When Bratton was appointed LAPD police chief in 2002, he instituted COMPSTAT Plus (i.e. the LA version). This created a centralized audit team of LAPD commanders, who then worked with each local police division to develop its own strategic plan to meet crime reduction goals. This was a sea change for the LAPD and also for COMPSTAT. Previous LAPD approaches to reducing crime, dating back to the 1960s Parker administration, relied on sending specialized units and tactical responses to local divisions. Never before had reducing crime focused on a locally based, community-wide approach that relied primarily on line-officers and command staff, in consultation with a central audit division. Los Angeles witnessed a significant reduction in crime rates after the implementation of COMSTAT Plus, as New York had under the original COMPSTAT (i.e. the version without a central audit), but the LAPD’s central audit version injected a concern for local police-community relations since Bratton has long been an enthusiast of the “Broken Windows” theory of crime that argues that police should focus not just on serious crime but on the quality of neighborhood life including police-community relations. The claim is that in so doing serious crime will anyway be reduced. In implementing COMPSTAT Plus, Bratton clearly felt that local commanders could not be trusted to implement a crime reduction program, including Broken Windows, without central intervention.

A second, highly relevant difference between the two cities has to do with the monitoring of consent decrees, which also revolves around variations in central monitoring, though in this case from the courts. The quality of police-community relations has long been a key issue in both cities, and accusations of unconstitutional policing have resulted in major civil litigation, with both cities operating under consent decrees. Still a key reason the NYPD seems to have reduced abuses less under the consent decree than its LA counterpart is that the NYPD, unlike the LAPD, was not subject to court-ordered monitoring of its behavior during this period. In 2009, Los Angeles emerged from nine years under a consent decree. In lifting the decree, the US District Court Judge noted: “The LAPD has become the national and international policing standard for activities that range from audits to handling of the mentally ill to many aspects of training to risk assessment of police officers and more.” The LAPD has entered into new partnerships with various community organizations, and in recent polls nearly eight percent of LA residents expressed strong approval for the performance of the department. Remarkably, this included 76 percent and 68 percent of the black and Latino respondents, respectively. 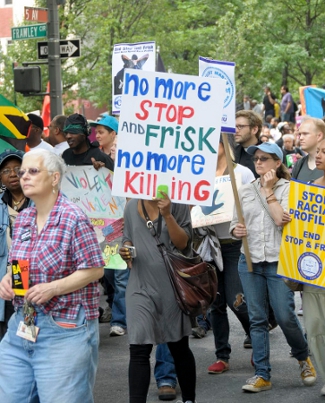 New York City, by contrast, emerged from the Daniels civil legislation and consent decree from 2003 to 2007, which did not involve court-ordered monitoring of the NYPD’s behavior. The NYPD became immediately mired in three new lawsuits alleging racial discrimination and a pattern of unconstitutional street stops. The NYPD has intensified its spectrum of Order Maintenance Policing tactics, including trespass enforcement in public housing, street stops (also known as “Stop and Frisk”), and misdemeanor marijuana enforcement. All three approaches have led to litigation against the NYPD. The divided response of the City’s diverse communities to the Stop and Frisk program, the centerpiece of the NYPD strategy, shows the depth of the breech between citizens and police along racial lines. In a recent poll, white voters approved 59 to 36 percent, while disapproval was 68 to 27 percent among black voters and 52 to 43 percent among Hispanic voters.

Bill de Blasio made criticism of Stop and Frisk a centerpiece of his mayoral campaign, and had nothing positive to say about the practice. Interestingly, Bratton now insists that Stop and Frisk is integral to effective policing. He says he will not abandon the policy, but operate it in a manner more respectful of blacks and Latinos and more often in white neighborhoods than under Commissioner Kelly/Mayor Bloomberg. He has not said so, but it seems likely that NYPD police behavior will be centrally monitored under Bratton to a far greater extent than it has been. The challenge, of course, is to keep New York’s crime rate low while reducing the widespread hatred of the police among black residents especially. We will see what new COMPSTAT and other initiatives he implements in that effort, perhaps setting precedents for policing in cities nationwide.

A second challenge facing Bratton is getting on with his new boss. Bratton’s first stint as New York’s Commissioner ended when mayor Giuliani fired Bratton out of jealousy because Bratton appeared on the cover of Time magazine for his achievements in reducing New York crime. Bratton and Giuliani both have notoriously large egos. Still, de Blasio’s tolerance here remains to be tested.

In their chapter in the new book (which inspired this article), New York and Los Angeles: The Uncertain Future, the authors, Jeffrey Fagan and John McDonald, conclude by writing, “Many citizens in New York City, including those most heavily policed, await the next mayor and police commissioner to see whether a new era of reform can begin that includes citizen trust and satisfaction as an outcome as equally worthy of addressing as the crime rate.” Hold on for a fascinating ride.