The years after 2001’s September 11 terrorist attacks have seen revived interest in the fictional superhero genre, most noticeably in film. Annika Hagley and Michael Harrison take a close look at one of the most popular and successful iterations of this genre, Marvel Comics’ Avengers’ series. They write that each character in the multi-billion dollar film franchise represents a distinct identity or behavior with which the United States has been struggling to reconcile itself, while collectively the film series represents the reactions of a nation to a direct, domestic attack.

The post- September 11 resurrection of the superhero genre, particularly in film, is a direct response to the feelings of helplessness and terror that Americans experienced in the days and years following the attacks. This renewed interest is also a revealing look at the psyche of a nation as it struggled with war, retribution, and its own constitutional and democratic imperatives.  In the long days following America’s wounding, the country witnessed the manifestation of its pain, desire for revenge, struggles with its principles, and thirst for the use of its awesome military power in several super heroic cinematic experiences from Thor to X-men: First Class to Iron Man and Captain America.

The group culmination of the Marvel superhero films, The Avengers, was a particularly well-designed expression of American political identity in the post-September 11 era: each character represents a distinct identity or kind of behavior with which the United States has been struggling to reconcile itself while collectively representing the reactions of a nation to a direct, domestic attack. The clear black-and -white “virtuous ‘us’ versus an immoral ‘them’” argument, which was a hallmark of the “Manichean” narrative of the attacks by the George W. Bush White House and the media, is problematic here because of both the less than virtuous characteristics of many of the heroes in The Avengers and a need to express a more complex understanding of the attack’s toll on the American psyche. In addition to the representation of the collective response to attack, the efforts to combat the threat to world peace portrayed in the film also mirror several issues faced in post-September 11 US domestic and foreign policy. 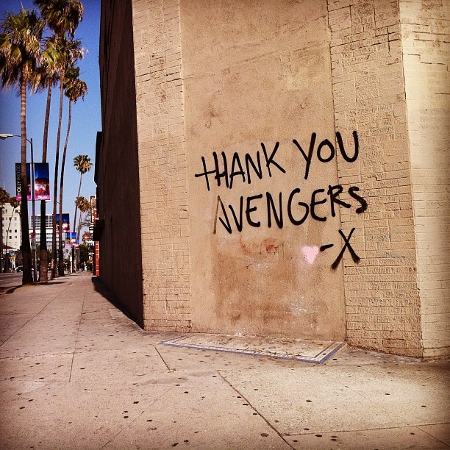 Iron Man, commonly understood to represent the military industrial complex, shows a newfound capacity to depersonalize war and is placed in counterpoint to Captain America, who represents traditional notions of patriotism and acceptance of authority. Captain America is discursively tied to a period with a clearer delineation between “us” and “them” and has traditionally has seen the world in black and white, with a clearly defined enemy. Potentially indicative of the post-September 11 blurring of ideological lines, though, the oppositional positioning of the two characters is complicated by certain moments in the film when each man steps out of the sphere that otherwise defines him. Iron Man, for example, reacts uncharacteristically emotionally to the death of Agent Coulson, and Captain America doubts authority and searches around the S.H.I.E.L.D. complex for hidden weaponry. These moments pave the way for each character to realize that he must temper his more hard-line ideological beliefs to work alongside the other.

Beyond Captain America and Iron Man, the other members of the superhero team round out the enactment of post-September 11 identities. Black Widow and Hawkeye harken back to the Cold War era in both their origins as double agents and assassins. Their presence provides viewers with a better understanding of the tensions inherent on a democracy defending itself while forcing the audience to engage with the idea that the underbelly of their nation’s prosecution of foreign policy is outside both international and constitutional law.

Bruce Banner/Hulk is particularly intriguing because his human intelligence, reason, and empathy are constantly juxtaposed with the unbridled anger of the beast that lies within him.  In his “normal” state, he is mild mannered, yet, when he changes into the Hulk, he becomes emblematic of the imperfect human response to crisis and represents the age-old human/monster divide.  The duality of his nature speaks to the contradiction between the human capacity for great intelligence, kindness, and empathy, and an astonishing ability to twist those characteristics and use them to “smash.”

As seen in his pre-Avengers introduction movie, Thor, the hero manifests the American warrior ethos. In The Avengers, Thor’s presence in the lineup serves multiple purposes of commentary about how America conducts its War on Terror.  In one instance, Thor blasts his way into the aircraft carrying Loki as prisoner from Germany back to the United States and kidnaps his brother, sparking an intense battle between Thor, Iron Man, and Captain America.  In this particular scene, Thor moves from representing jurisdictional tensions to serving as a proxy for the shifting and fractious relationship between the United States and her allies that united after September 11, but that slowly withered and cracked as the United States continued to prosecute the war in ways that some European and traditionally more neutral countries resented.

The epic battle scene at the film’s conclusion involves a force of strange alien creatures that attack from the sky, destroy buildings, and harm civilians in a clear recreation of the events of September 11.  This time, however, the heroes are successful in preventing disaster through the balanced combination of their American or pro-American identities and ideologies. All of the Avengers must find common ground in the recognition that their response to being attacked cannot involve a black-and-white reaction, nor can it be the simple deployment of missiles and use of technology.  It cannot be resolved solely through underground espionage and “black operations,” it cannot ignore the pain, anger, and rage that the combined human psyche brings to the battlefield, and should not ignore the desires of allies nor court the abuse of jurisdictional authority.

This community response is further underscored by the means by which the film is a product of its predecessors. Each superhero was first introduced in a stand-alone film that defined the heroes in the terms of their worldviews, quirks, and particular contexts. When facing a potential global threat, much like the United States post-September 11, the clear “boxes” in which each character could easily be placed (unwavering patriotic hero, “bad” agent turned “good,” tortured monster, genius-billionaire-playboy-philanthropist)  no longer sufficiently  define them. The post-attack world is much more nuanced and complicated. The nation was unable to prevent the attacks of September 11, and because of this inability to reconcile and prevent this tragedy in real life, the ideas, motivations, and attitudes bound up in the pre- and post- September 11 world are reconciled on the screen, albeit uncomfortably. The Avengers do swoop in and save the day, but the world left afterwards, is, like current reality, one of numerous questions and doubts.

This article is based on the paper “Fighting the Battles We Never Could: The Avengers and Post-September 11 American Political Identities” from the January issue of PS: Political Science and Politics. The paper is freely available until February 1.