Fears over the impact of Citizens United may be misplaced

The Supreme Court ruling in the 2010 case, Citizens United v. Federal Election Commission, has generated one of the largest public outcries of any court decision in recent memory. Perhaps the most pervasive criticism of the case argues that it unleashed a deluge of big money into elections, distorting the political system to favor corporations. However, the actual effect on elections is unclear. Douglas Spencer and Abby K. Wood compare state-level data to test the impact of the decision and find that while spending increased in affected states, the actual ramifications of the ruling are much smaller than many believe.

Four years ago this month, the U.S. Supreme Court seemingly changed the landscape of American politics. In its landmark decision, Citizens United v. Federal Election Commission, the Court ruled that a federal law banning corporations from spending money in support of (but not in coordination with) political campaigns violated the First Amendment of the U.S. Constitution. 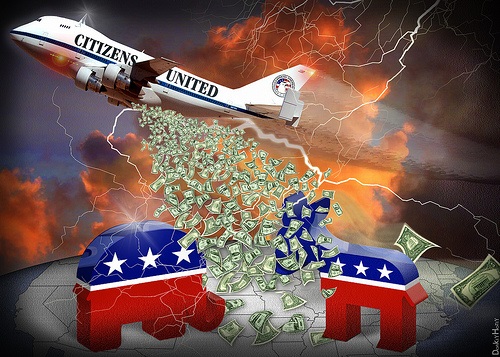 A chorus of criticism followed the decision, arguing that it would “open the floodgates” to political spending and allow corporations to bankroll American elections and, by extension, to distort public policy away from the public interest. Newly available data on independent political spending suggest that some of this fear has been misplaced.

One of the most overlooked consequences of the Citizens United decision was its impact on state laws. In fact, about half of the states banned corporations from making independent expenditures in 2010. These laws became collateral damage in the wake of Citizens United, but they also made it possible to actually measure how the ruling impacted political spending. Because some states never banned corporate independent expenditures, there is a baseline against which to measure changes in states affected by Citizens United. This baseline is missing for federal elections because there is no control group. So what did we find?

First, independent spending increased in every single state, but it increased at twice the rate in states that were affected by Citizens United, as illustrated in Figure 1 below. Second, the sharp increase in spending is driven almost exclusively by non-profit organizations and political committees. Unfortunately, data on the identity of donors to these organizations and committees is unavailable, meaning we do not know the degree to which corporations or unions are funding these groups. This is ironic because one of the reasons the Supreme Court justified its decision in Citizens United was that robust disclosure of corporate spending would act as its own regulation. This turned out to be foolish logic. 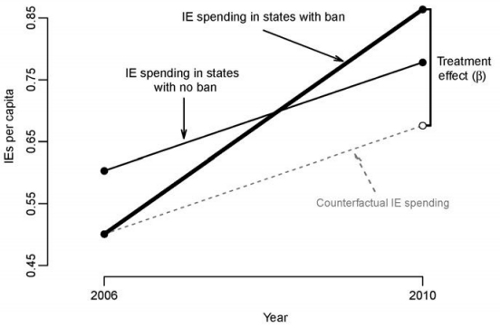 Note: Difference-in-differences between per capita independent expenditures in 2006
and 2010 and between states with a corporate independent expenditure ban and states
without a ban. This approach assumes a parallel time trend between treated states and control  states. The “treatment effect” or difference between spending in states in the treatment  condition and the hypothetical counterfactual is 18.8 cents per person.
Source: National Institute on Money in State Politics 2012.

On the question of political distortion, however, the data do support the Supreme Court’s opinion. When we look at the distribution of spending, we do not see an increase in million dollar expenditures, nor do we see a statistically significant decrease in the amount of small expenditures (< $1,000). Instead, as Figure 2 illustrates, we observe an increase in “mid-range” expenditures between $1,000 and $40,000. This finding is particularly striking because it cuts against the conventional wisdom of spending behavior and raises questions about the states’ equality interest, generally framed as a problem of disproportionate spending by the wealthiest at the expense of the poorest, which we do not observe. 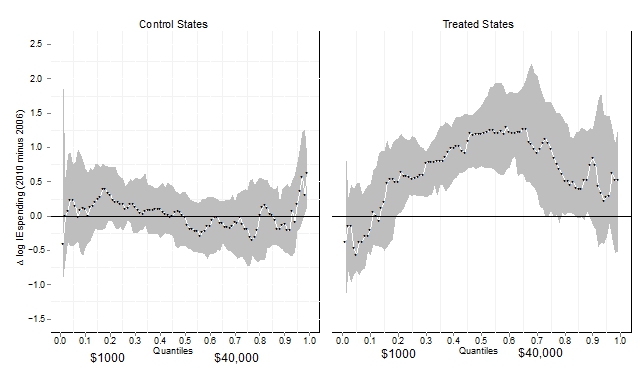 In terms of public policy outcomes, other emerging research suggests that Citizens United has had modest, if any effect on policies we think might favor corporations or unions. For example, researchers have found no correlation between bans on corporate spending and state minimum wages, income inequality, partisan control of government, incumbent reelection rates, or corporate tax burdens.

We wish to emphasize that the benefit of analyzing political spending at the state level (a more systematic way to make causal inferences) comes at the cost of generalizability: state elections are fundamentally different than federal elections. In addition, our data are limited to just two elections, one of which happened a mere ten months after Citizens United was announced, meaning it is not clear whether observed changes reflect the behavior of careful, strategic actors or a knee-jerk response to the decision. Nevertheless, all of these state-level findings caution against giving Citizens United more credit than it is due for the massive amount of spending in campaigns in the United States.

This article is based the paper “Citizens United, States Divided: An Empirical Analysis of Independent Political Spending” which appeared in the Indiana Law Journal.

Douglas Spencer – University of Connecticut
Douglas Spencer is Associate Professor of Law and Public Policy and a Roger S. Baldwin Scholar at the University of Connecticut. His research and writing focus on several important questions regarding the institutional regulation of elections at the intersection of law and political science, including many empirical questions that remain underexplored by legal scholars.

Abby K. Wood – University of Southern California
Abby K. Wood is an Assistant Professor of Law at the University of Southern California Gould School of Law. Her research centers on efforts to improve public governance, specifically by using empirical methods to help answer questions of how laws incentivize behavior, how agency design affects agency performance, and how we can measure levels of public corruption so that we can know whether our efforts to reduce it actually work.