Democrats’ Senate majority at risk, Republicans kill immigration reform, and will Obamacare cost 2 million jobs? – US national blog round up for 1 – 7 February

On Sunday, Daily Kos looks at recent news that 20-term Congressman Henry Waxman (D-CA) will not seek re-election in this year’s mid-term elections. They say that Waxman will leave Congress a less relevant place than it was when he found it, and that it is no longer a place where anything gets done. With the coming retirement of Waxman and several other Democrats who have had long terms in the House, American Thinker wonders what this means for House Minority Leader (and former Speaker) Nancy Pelosi. With the mid-terms looming before year’s end, many commentators are beginning to look at election strategies. Crooks & Liars writes that the Democrats, now nearly certain that they cannot win the House of Representatives, are concentrating their electoral strategy on maintaining their hold on the Senate. On Thursday, The Monkey Cage says that the Democrats’ Senate majority is at risk given that the Democrats have 21 seats to defend, whilst the GOP only has 15, and that the states that are holding Senate elections are less Democratic.

In the wake of last week’s State of the Union address, some Republicans have suggested that they would like to impeach President Obama over his desire to use executive orders. PoliticusUSA writes that Republicans are disgracing America with their talk of impeachment, as it part of their desire to delegitimize the President. On Wednesday, The Foundry criticizes President Obama for side-stepping a question about reduced working hours because of employers’ obligations under the Affordable Care Act, by calling for an increased minimum wage, during a Google Hangout session.

On Saturday, FreakOutNation looks at Allan Levene, the Republican who is so keen to enter Congress that he is running in four states. Another Republican keen for votes is Senator Rand Paul (R-KY) – especially from women, reports Hit & Run. They write that though Paul has been criticized for his part in the GOP’s ‘War on Women’, he does have a record of gaining their votes. PoliticusUSA writes on Tuesday that the conservative group, For America has begun running ads against Republican leaders, such as House Speaker John Boehner and Senate Minority Leader Mitch McConnell, accusing them of inaction over policy issues like Obamacare. Meanwhile, Informed Comment writes that it is odd that there is an increasing likelihood that the Republicans will gain control of the Senate this fall, when the GOP’s main platform positions have been roundly rejected by the American people.

Looking ahead to the 2016 Presidential race, Crooks & Liars writes on Tuesday that many Republican strategists still feel that New Jersey Governor Chris Christie is still a national force, despite his recent ‘Bridgegate’ difficulties. Still on the Republican side of 2016, Sabato’s Crystal Ball says that the GOP candidacy is still wide open, with no evident frontrunners.

Daily Kos looks at the role of James Madison’s ‘Federalist #10’, and whether it is responsible for the political divide in America today, as Madison never envisioned that those elected to represent the masses would vote in concert with their constituents. Crooks & Liars takes on the idea that has been circulating in the media this week that Obama’s is an ‘Imperial’ Presidency, by examining the number of executive orders Obama has issued. They say that Obama has issued executive orders at the slowest rate since Grover Cleveland in the late 19th century.

On Tuesday, The Foundry reports that the Federal civilian workforce has grown by 14 percent from 2004 to 2012, and now stands at more than 2.1 million. They say that the recession largely bypassed the Federal government.

American Thinker tries to introduce a new term into the political lexicon – ‘waving a hero’, referring to President Obama’s tribute to sergeant first class Cory Remberg, at last week’s State of the Union.

This week saw Congress pass a farm bill, vote down a bill that would reinstate unemployment assistance, and debate the merits of immigration reform. On Sunday, The Foundry writes that the farm bill passed by the House the previous week was a turn towards 1930s style central planning policies, including generous hand-outs. Later in the week, Daily Kos reports that Senate Democrats attempted to pass a three-month extension to unemployment aid that had expired for 1.7 million people in late December. This was not to be, however, as Crooks & Liars writes that the measure was filibustered and lost by one vote. 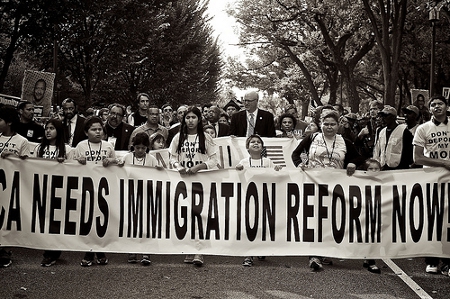 On immigration reform, on Monday, Roll Call says that the good news for reform is that it is an election year, and that 70 per cent of immigration laws enacted over the last five decades were passed in a congressional election year. Wonkblog wonders whether or not Obama would, via executive order, be able to halt deportations for eight million illegal immigrants who would qualify for a path to citizenship under the Senate’s bill, passed last year, though now stalled in the House. Meanwhile, Hit & Run says that the GOP is contradicting itself in its calls for tighter border policing and tougher employment checks to catch illegal immigrants, when it accuses the federal government of being too inefficient to run the post office or healthcare. Outside the Beltway reports comments this week from House Speaker John Boehner that the GOP does not trust that immigration reform would be properly implemented, meaning that reform is unlikely. Crooks & Liars is not optimistic about reform, writing that Senate and House conservatives have agreed to kill immigration reform, as they would prefer to wait until 2015, when they might control the Senate.

This week the likelihood of the U.S again reaching its debt ceiling appeared on the Congressional radar, with the Democrats of the Ways and Means committee issuing a letter to Speaker John Boehner warning him that they will not negotiate over the debt ceiling, writes PoliticusUSA. Wonkblog looks at the mechanics of the debt ceiling, writing that while it is difficult to say exactly when it will be reached, the first two weeks of March looks to be the most likely time period when it might happen. On Tuesday, Daily Kos reports that two Tea Party Congressmen stated this week that they did not want Boehner to put up a fight over the debt limit, a break with their more combative line last year.

On Monday, The Lonely Conservative reports on errors facing the government’s Affordable Care Act web portal, Healthcare.gov. They say that many who have found that the site made mistakes when signing up for insurance have also found that the government is not yet able to correct the errors. Meanwhile, Wonkblog reports on the latest lawsuit against Obamacare, one which challenges the legality of Federal exchanges in states that do not have their own exchanges, saying that while it is not likely to succeed, if it did, it would put the entire program at risk. Crooks & Liars has an interview with Dr David Blumenthal, who runs a New York health policy foundation, who says that Obamacare has lost a great deal of media attention, as the American public learns more about how the program works, and are getting on board.

This week the Brookings Institution issued a report stating that Americans will see falling incomes due to the program, writes American Thinker. The Atlantic looks at another study this week, this one from the Congressional Budget Office (CBO), which says that Obamacare would likely encourage adults to work less as employees will no longer have to work full time to get health insurance, something Republicans have seized on to criticize the program. On Thursday, Occasional Planet examines media coverage of the CBO report, saying that the media mostly got it wrong in their reporting that Obamacare would mean more than 2 million people would quit their jobs. They say that a close reading of the report shows that actual job losses are not predicted, just workers seeking fewer working hours. Meanwhile, National Journal says that Democrats are doing little to combat the multitude of anti-Obamacare political ads, preferring instead to change the conversation towards other issues such as the minimum wage.

On Monday The Feed looks at the potential for Senate Majority Leader Harry Reid to kill the Trans Pacific Partnership trade deal – he is apparently against the idea of it being fast tracked under new proposals that would see a swifter timeline for such agreements and prevent amendments which would slow them down. Meanwhile, Crooks & Liars reports that Secretary of State John Kerry has called for a ‘Transatlantic Renaissance’ for the U.S. and Europe to jointly tackle shared threats such as wars and climate change.

This week saw the release of a report by the State Department on the environmental effects of the proposed Keystone XL pipeline, and which broadly supports the pipeline’s approval. The Political Carnival writes that Obama should say no to the pipeline as it would bring the ‘dirtiest oil on earth’ through the country. American Thinker takes the opposite line, calling for Obama to use the new report to justify signing approval for the pipeline. The Feed wonders if the positive State Department report is the biggest defeat that the green movement has yet seen. 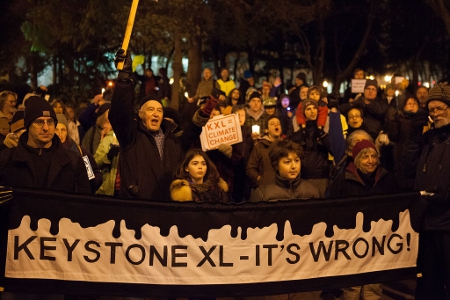 On Sunday, The Foundry looks at Federal and state welfare programs, which they say now cost more than $900 billion every year. They write that welfare should require recipients to work, and that the welfare system’s embedded marriage penalties should be reduced. Still on work and family values, Crooks & Liars writes that the U.S. has the world’s least flexible workplaces. On Thursday, The Atlantic says new evidence shows that increases in the minimum wage cause fast-food businesses to shut – but also that new restaurants open in their place, with little change in employment levels.

On Monday, Wonkblog writes that the abortion rate in the U.S. has hit a 30-year low, and dropped 13 percent since 2008. American Thinker responds to the new figures by arguing that those in the anti-choice movement cannot take credit for the falling rate, as it has occurred in tandem with lower birth rates and increasing use of long-term contraceptives.

Outside the Beltway reports that the Federal Aviation Administration has shot down a Wisconsin breweries application to deliver beer to its customers via drone.

FreakOutNation writes that a Girl Scout in California who was selling cookies door-to-door has a gun pulled on her by a resident.

The Volokh Conspiracy says that there has been a proposal in the Missouri legislature for the “high five” to become the official state greeting.