The long-term unemployment benefits Congress passed after the 2008 financial crash expired at the end of December; 1.3 million people immediately lost their benefits, and another 4.9 million people will be affected over the next year. Gertrude Schaffner Goldberg traces the history of unemployment insurance and other policies to help the jobless, concluding that the U.S. needs to revisit the New Deal model of actively putting the unemployed to work.

Lifeline benefits for millions of jobless workers still hang in the balance. The current debate over whether to maintain benefits for long-term unemployment underscores limitations in unemployment insurance that have plagued this program throughout its history. A breakthrough program when it was enacted in 1935, Unemployment Insurance was an acknowledgement, after centuries of blaming the unemployed for being out of work, that joblessness was usually involuntary and, if so, should be compensated. But for how long? 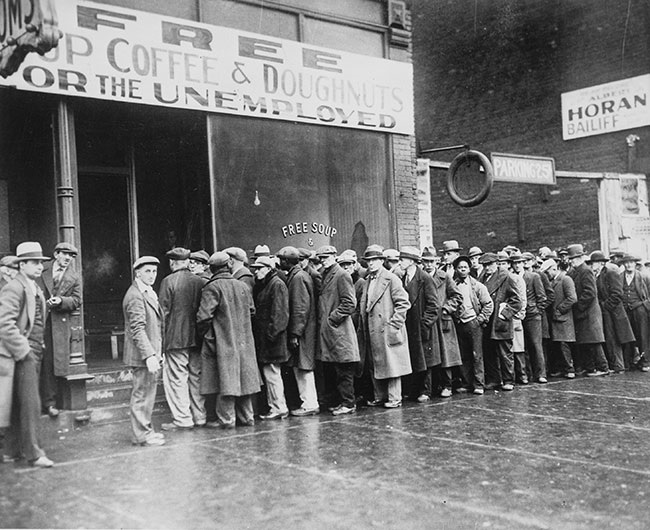 The problem persisted, even with regular unemployment insurance benefits lasting 26 weeks, as they do now. Particularly during recessions, workers are often jobless for more than half a year. Currently, nearly four million people have been out of work for 27 weeks or more, down from over six million in 2010. Even in better days, substantial numbers are jobless longer than the half-year limit. Although there are fewer of them, they are no less needy than their counterparts whose extended unemployment occurs during recessions.

In 1970, with unemployment on the rise, Congress addressed long-term unemployment with a permanent Extended Benefit program providing compensation for an additional 13 weeks beyond the regular 26 in states with specified high levels of unemployment. In addition to this permanent program, Congress, from time to time, votes temporary unemployment insurance extensions–twice in 2008, in response to the Great Recession. As unemployment continued to rise in the 1970s, Congress also enacted a public service employment program resembling Depression-era work programs. This Comprehensive Employment and Training Program (CETA) was controversial although it benefited those who got jobs as well as the recipients of their services. It was terminated in 1982 under the Reagan administration, even though unemployment stood at a post-Depression high of nearly 10 percent.

Temporary fixes for long-term unemployment are poor public policies. Does it make sense for millions of Americans to be deprived of useful work and the dignity that goes with it for long periods of time—even if part of their wages is replaced by extended unemployment benefits? And what about the loss to the nation of the goods and services they could be producing?

US unemployment policy needs a permanent, active component. It’s time to revisit the New Deal model of putting the unemployed to work. These programs, as one New Deal historian expressed it, “literally changed the face of the nation.” Unemployed workers built millions of miles of roads and thousands of public facilities–courthouses, schools, playgrounds. In addition to massive physical infrastructure improvements, they conserved depleted soil, forests and wildlife; created works of art; performed in plays and concerts to audiences, many of whom had never experienced live productions; gave music and art lessons to children; established nursery schools; and captured forgotten parts of our history such as the narratives of ex-slaves. In short, unemployed workers both served the nation and earned a paycheck.

The list of the nation’s unmet needs grows longer. With failing schools, crumbling infrastructure, an economy desperately in need of greening how can we afford to continue to throw away the benefits that the unemployed could bestow? Government job creation, if well-planned and administered, could be an important, permanent component of benefits to the unemployed and to the nation. Legislation pending in the House of Representatives such as H.R. 1000, the Humphrey-Hawkins Full

Employment and Training Act, introduced by Representative John Conyers (D-MI) would begin to address this problem. While such legislation is being considered, a just and compassionate nation should rescind the callous withdrawal of extended benefits tor unemployed workers and their families.

Gertrude Schaffner Goldberg – Adelphi University
Gertrude Schaffner Goldberg is Professor Emerita of Social Policy and former director of the Ph.D. Program in Social Work at Adelphi University. She is co-author/editor with Sheila D. Collins of When Government Helped: Learning from the Successes and Failures of the New Deal . Goldberg is the author of numerous articles on unemployment, job creation, economic inequality, and the welfare state. She is a co-founder and chair of the National Jobs for All Coalition.