Maryland’s ‘Obamavilles’, Walker-gate intensifies, and LGBT rights in Texas and Arizona- US state blog round up for 22 – 28 February

New York City Mayor Bill de Blasio made news again in the Capitol State this week, as The Lonely Conservative reports that de Blasio was caught talking on his phone and crossing a Brooklyn street against the light, in spite of his crackdown on jaywalkers since taking office. NY State of Politics looks at the backlash from State Republicans in response to Governor Andrew Cuomo’s plan to allow prisoners to earn college degrees. The Brennan Center for Justice Blog endorses the inclusion of public campaign finance reform in the New York City Bar Association’s 2014 State Legislative Agenda. American Thinker writes that New York is advertising its desperation by promoting its START-UP NY plan, a series of tax incentives to attract new businesses to the state, in Texas.

In New Jersey, Daily Kos reports that, in the wake of Bridgegate, Governor Chris Christie’s approval ratings have now fallen below 50% of registered voters and his bipartisan appeal has fallen even further, which could spell disaster for his 2016 presidential aspirations. Crooks and Liars theorizes that Bridgegate could be the least of Christie’s problems in 2016 as New Jersey’s economic growth seems to be faltering. Meanwhile, Save Jersey traces the Garden State’s history of using the state pension fund as a “piggybank.”

On Friday, The Political Carnival covers alarming comments from a Republican state Representative in Maine, Lawrence Lockman, who has suggested that if women have a right to an abortion, then men a man should be free to rape them. 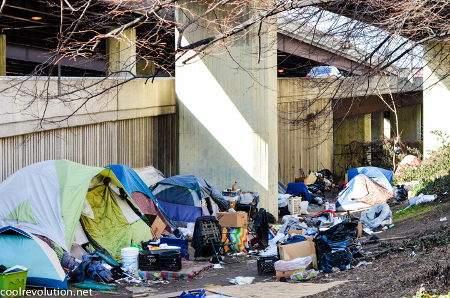 In Maryland, The Lonely Conservative writes that homeless communities have sprung up around the US, but are not being reported on due to the liberal media bias in the US, leaving the task of reporting on these “Obamavilles” to The Daily Mail in the UK.

In North Carolina, the Progressive Pulse examines a recent report from the NC Budget and Tax Center, which finds that hard work is not enough to lift people out of poverty because the changing economy has replaced so many middle wage manufacturing jobs with those earning poverty wages in the service sector. The poverty trap has been worsened as state and federal lawmakers have cut back on programs that create well-paying jobs.

Daily Kos reports on South Carolina Governor Nikki Haley’s recent comments that she discourages companies from setting up shop in the Palmetto State if they will bring union jobs with them. Given South Carolina’s right-to-work laws, the blog wonders what about union work frightens Haley so much.

In Florida, National Journal looks at a recent poll for Florida’s special election, which reports that Republican David Jolly and Democrat Alex Sink are virtually tied for recently deceased Representative Bill Young’s empty seat (Florida’s 13th district). Roll Call notes that national organizations have spent more than $6.4 million on independent expenditures in this special election; 90% of this money has been spent against the candidates. Still focused on the election in the 13th district, The Shark Tank scrutinizes the evolution of Alex Sink’s position on the Affordable Care Act after her recent comment that she didn’t “necessarily embrace” Obamacare. Staying in Florida but changing topics, SaintPetersBlog reports that state senator Rob Bradley has entered a bill that would require the local and state governments to only purchase American-made US and Florida flags.

In Kentucky, United Liberty writes that Alison Lundergan Grimes, the likely Democratic nominee to challenge Senate Minority leader Mitch McConnell’s seat, has refused to answer questions about whether she would campaign with President Obama, claiming that she stands independent of her party.

Tennessee Watchdog theorizes that the Tennessee Supreme Court could see a major shakeup in the retention elections for three of the five sitting justices this year, who are facing intense scrutiny for recent controversial decisions, particularly regarding the death penalty.

In Alabama, Daily Kos looks at a series of anti-abortion bills advanced by the state GOP, which would make it illegal to perform an abortion after a fetal heartbeat can be detected, implement a 48 hour waiting period for women carrying a non-viable fetus, and increases the burden of evidence required for a judge to grant a minor permission to have an abortion without her parent’s permission. Still in the Yellowhammer State, Daily Kos reports that a bill that would require school teachers to spend up to 15 minutes reading prayers before each class has been voted forward by committee, despite a botched vote.

Arkansas Blog examines the politics of the minimum wage in the Natural State as an Arkansas group is campaigning to add a ballot initiative that would increase the state’s minimum wage to $8.50 an hour.

In Texas, Outside the Beltway writes that Greg Abbott, the Republican candidate for governor, has an 11 point lead on Democratic candidate Wendy Davis, a lead which is expected to grow in the coming months. Daily Kos reports that Texas’ gay marriage ban went the way of those in Utah, Virginia, Oklahoma, Ohio, and Kentucky as a federal judge ruled it to be unconstitutional. However, gay Texan couples will not be able to get married yet, as the ruling has been stayed for the state’s appeal. Meanwhile, Burnt Orange Report writes that, after a four year court battle, Texas student Skye Wyatt has won a federal lawsuit against her school district for violating her privacy after her high school softball coaches outed her as gay to her mother.

Hit & Run Blog questions the execution of Michael Taylor in Missouri, as the state will not reveal where it obtained the ever-more scare drugs used in lethal injection and it seems very likely that the drugs were obtained illegally.

Blog for Iowa looks at a new report that raising the minimum wage in Iowa to $10.10 an hour would add more than $270 million to the state economy by creating additional spending power for working class families, as 300,000 Iowans would receive a pay increase.

In Illinois, Daily Kos writes that a new marriage equality ruling from a district judge that has legalized gay marriage in Cook County immediately, while the rest of the state will have to wait until June 1st.

Michigan Liberal decries State Representative Phil Potvin’s plan give districts the option to lengthen the school day instead of adding days to make up for the large amount of snow days this year, explaining that this plan harms kids participating in extracurricular activities and complicates parental schedules parental schedules. Meanwhile, The Feed reports that in Detroit, some of the city’s pensioners (who are suffering after the city’s bankruptcy was approved), are threatening to ‘shut down the city’. They say that this shows the tension between the city’s pensioners and bondholders.

In Wisconsin, the contents recently released emails from Governor Scott Walker’s aides appear to be developing into a full-fledged scandal and was given the name ‘Walkergate’ this week by several blogs. FreakOutNation reports that emails revealed that Walker’s aides engaged in voter caging, an illegal campaign practice used to purge voters from the rolls that typically targets minority neighborhoods, in the weeks leading up to the 2010 gubernatorial race. Uppity Wisconsin writes that Walker was able to rise to power in progressive Milwaukee, a culturally and economically diverse county, because of white flight.

Open Secrets examines two bills before the Minnesota House Civil Law Committee about the distribution of mug shots over the internet, explaining that these photos need to be publically available to prevent secret arrests, but should not be accessible online, where they have been copied and used for extortion in several cases.

Meanwhile in Missouri, Occasional Planet is embarrassed that Republicans in the state have introduced a bill that would institutionalize discrimination against gay people in the name of religious freedom. They say that the bill, which ‘copies’ a similar bill in Arizona this week, shows that GOP state legislators are trying to turn the clock back on issues that most thought were long settled. 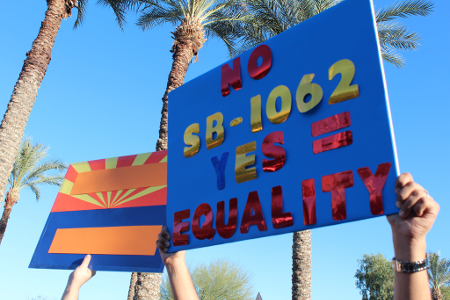 This week saw considerable controversy come out of Arizona, with the legislature’s signing of Senate Bill 1062, which would allow businesses to discriminate against gays and lesbians for religious reasons. On Sunday, Crooks & Liars write that pressure is mounting for the Governor, Jan Brewer, to veto the bill, especially as the possibility of an economic backlash against the state became apparent. The American Prospect wonders if laws like this one mean that Arizona is now the ‘new Kansas’ – given that even that state balked at passing similar legislation earlier this month. By Wednesday, Brewer had given in to the mounting pressure and vetoed the bill, reports Daily Kos.

In Hawaii this week, Honolulu Civil Beat makes the case for raising the state minimum wage from $7.25 an hour to $10.10. They say that a bill, currently before the state house, which raises the minimum wage, would benefit 80,000 Hawaiian workers, and pump more than $127 million into the local economy.

Moving down to California, Fox & Hounds ponders whether or not the tech sector will be able to rebuild the state’s middle classes, especially against rising fears of technology eliminating jobs. Moving to politics in the Golden State, Sabato’s Crystal Ball looks at a proposal to split California into six new states, and what that might mean for presidential races and for Congress. Finally, Capitol Alert reports on Thursday that Governor Jerry Brown has announced that he has taken out the papers to run for re-election this fall. On Friday, Hit & Run wonders what someone has to do to be kicked out of the California legislature, after Democratic state Senator, Ron Wright, still technically remains in his post, even after his January conviction for voter fraud and perjury.