The past twenty years has seen three government shutdowns and an unprecedented number of filibusters. While these trends seem symptomatic of increasing political polarization it is exceedingly difficult to measure the difference between the two parties over a long period of time. Using data from the American National Election Survey, Stefan Krasa and Mattias Polborn examine policy divergence in presidential elections between 1972 and 2008, finding a sharper contrast between the parties today. They attribute this divide to the realignment of both parties on cultural issues.

Thomas Frank’s bestseller What’s the Matter with Kansas? argues that a Republican emphasis on culture war issues following Ronald Reagan’s victory in 1980, as well a failure of the Democratic party to support populist economic positions, lead to major realignment of the fault lines in U.S. politics.

While eminently plausible for most observers of U.S. politics, empirical support for this thesis has been elusive. Is the difference between Republicans and Democrats today considerably larger than it was 30 years ago? And, are politicians or voters responsible for the perceived political polarization? Our research suggests that the parties indeed offer a sharper contrast today, primarily because of a party realignment on cultural issues such as abortion. 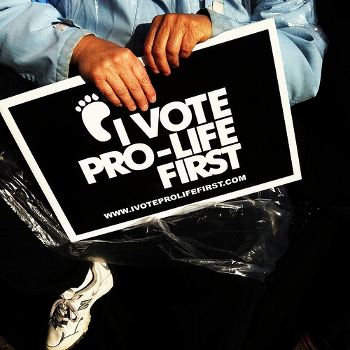 It is conceptually challenging to measure the difference between the parties’ positions, especially when we deal with long periods of time. For example, how can we decide whether the policy distance between Ford and Carter in 1976 was larger or smaller than that between McCain and Obama in 2008? Since the relevant policy issues in two different campaigns are usually very different, directly comparing the difference between the candidates’ platforms is impossible.

We approach this problem by combining a theoretical model of voters’ decisions with data from the American National Election Survey, which asks a sample of voters about their political preferences on issues such as abortion or government involvement in the economy, as well as about their vote in the Presidential election.

From the voters’ opinions on different political issues, we estimate their “ideal positions” in a two-dimensional policy space, where the horizontal component goes from socially liberal positions on the left to socially conservative positions on the right. The vertical component captures economic preferences, with high values standing for a preference for substantial government involvement in the economy, while low values represent individuals who want to keep taxes low and government out of the way of private firms.

Consider Figure 1 in which the Democratic and Republican candidates differ mostly in their economic policies, and not so much on cultural issues. In this case, the fault line through the electorate that divides likely Democratic voters from likely Republican voters is relatively flat. Voters are separated mostly according to their economic preferences, while it does not play a role whether they are social liberals or social conservatives — after all, the candidates offer more or less the same cultural position.

Figure 1: Division between Democrats and Republicans on Economic Policy 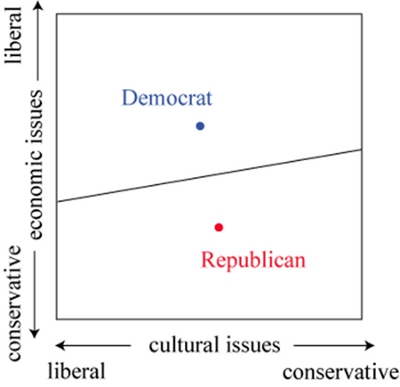 In contrast, if the main difference between the candidates is on cultural issues, while their economic positions are very similar (such as in Figure 2), then the fault line is steep and divides social liberals from social conservatives.

Figure 2: Division between Democrats and Republicans on Cultural Issues 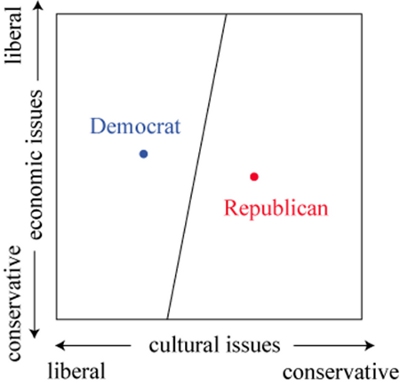 Also, when the two candidates propose very similar policies, then a voter’s like or dislike of the candidate personalities may easily outweigh his ideological preference (which is small when the candidates propose similar positions). In contrast, in a very ideologically polarized election in which the two candidates offer starkly contrasting visions for the future, a lot fewer voters will be willing to “cross-over” the dividing line.

So, what do the data tell us about the change in American politics over the last generation?

Figures 3 and 4 show voters and their vote choices in the 1976 (Carter vs. Ford) and 2004 (Kerry vs. Bush) elections, respectively. A blue dot stands for a voter who voted for the Democratic candidate, while a red dot stands for a Republican voter. 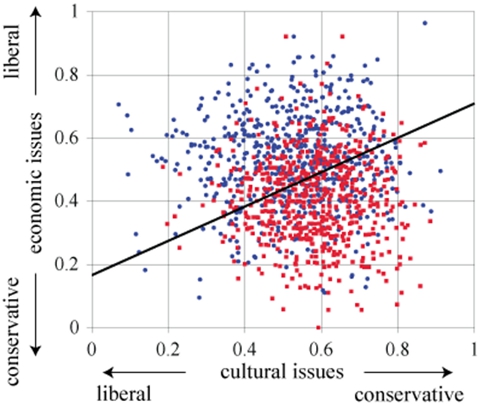 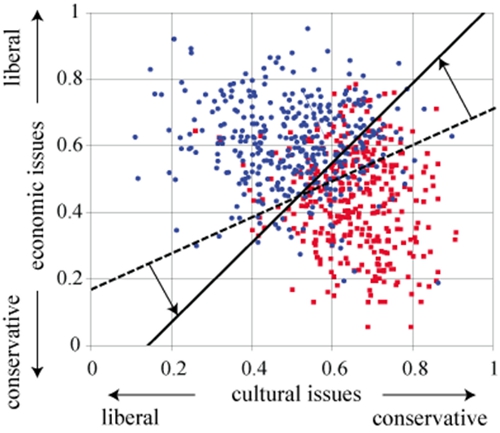 In both of these elections, the electorate splits approximately 50-50. However, there are some remarkable changes. In 1976, voters split primarily along economic issues, with economic liberals mostly voting for Carter, and economic conservatives mostly voting for Ford. In contrast, a voter’s social liberalism or conservatism played only a minor role for his vote choice in 1976.

In 2004, however, the separating line is considerably steeper, so that social and economic preferences play an approximately equal role in determining the vote.

If we superimpose the 1976 and the 2004 separating lines, there is an area of voter preference types that were mostly Democratic voters in 1976, and are nowadays mostly Republican voters: These “Reagan Democrats” have economically liberal preferences, but are culturally conservative. Demographically, the voters with these preferences are disproportionately white, low-to medium skilled workers, and considerably more religious than the average.

The voter group that moves in the other direction, from Republicans to Democrats, is disproportionately well-educated, secular and non-white.

The increased influence of cultural preferences on vote choices is a consequence of the relatively stronger increase of policy differences between the parties on cultural issues than on economic ones. Using our model, we can in fact use the different behavior of voters in 2004 and 1976 to back out what the policy differences between the candidates must have been to generate the observed voter behavior. 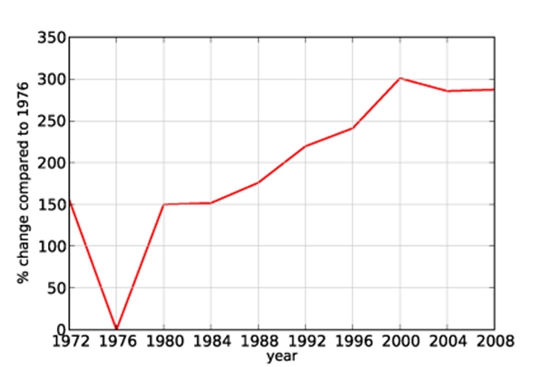 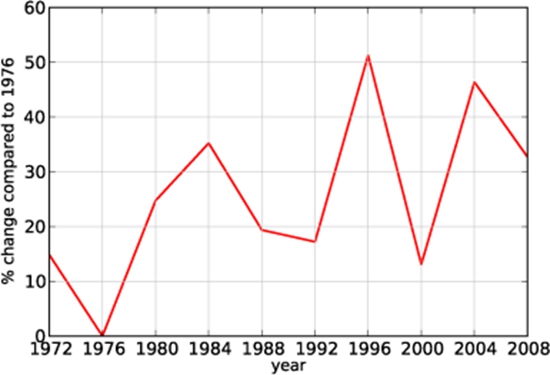 Returning to Figures 3 and 4, it is also evident that the ideological separation of the electorate is much sharper in 2004 than in 1976—the percentage of voters who cross over and vote for the candidate on the “wrong” side of the ideological separation line (for example, voters to the right of the dividing line that vote for the Democrat) is much smaller in 2004 than it was in 1976. That is again because the policy differences that voters perceived between the candidates in 2004 were much bigger than in 1976.

In contrast to politicians, average voter preferences, or the standard deviation of voter preferences on both cultural and economic issues have not changed much over time. However, cultural conservatives today are more likely than in the past to be also economic conservatives, and this has also contributed to the observed polarization, although the size of this effect is much smaller than the one for which politicians are responsible.

This article is based on the paper “Policy Divergence and Voter Polarization in a Structural Model of Elections,” forthcoming in the Journal of Law and Economics and the paper “Social Ideology and Taxes in a Differentiated Candidates Framework,” which appeared in the American Economic Review.