Since the beginning of the financial crisis in 2008 austerity has been the cornerstone of economic policies in the U.S. and Europe. In 2010, these policies were given a significant boost by the publication of research by Harvard University Professors Reinhart and Rogoff, which stated that cutting public spending to control deficits, would help to restart economic growth. Robert Pollin discusses new research which shows that several of Reinhart and Rogoff’s critical findings were incorrect. He argues that after compensating for the mistakes made, the data shows that that the relationship between growth and public debt varies widely over time and between countries, and that countries that are approaching a 90 percent ratio of public debt to GDP may not necessarily be at a danger point for economic growth.

In 2010, the Harvard University economics professors Carmen Reinhart and Kenneth Rogoff published a paper in the American Economic Review, “Growth in a Time of Debt,” that spoke to the world’s biggest policy question: should we cut public spending to control the deficit or use the state to rekindle economic growth? This paper subsequently served as an important intellectual bulwark in support of austerity policies in the United States and Europe. It has been frequently cited by major economic policymakers, including the US Congressman Paul Ryan, the UK Chancellor George Osborne, and Olli Rehn, the leading economic official of the European Commission. Indeed, the Economics Nobel Laureate and New York Times columnist Paul Krugman observed that “Reinhart-Rogoff may have had more immediate influence on public debate than any previous paper in the history of economics.”

However, my co-authors Thomas Herndon and Michael Ash and I showed, initially in an April 2013 preliminary working paper of the Political Economy Research Institute (PERI) titled “Does High Public Debt Consistently Stifle Economic Growth,” that several of the critical findings advanced in the Reinhart-Rogoff paper were wrong. Our working paper set off an intense global debate through much of the spring of 2013, including multiple responses by Reinhart and Rogoff themselves, and rejoinders by my co-authors and I. 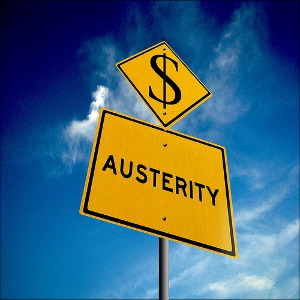 Now, in a final, fully refereed version of our paper, with the same title and published online in December 2013 with the Cambridge Journal of Economics, we examine these questions further, by expanding the range of our critique of the Reinhart-Rogoff research, and addressing the responses advanced by Reinhart and Rogoff in response to our initial working paper. Reinhart and Rogoff have referred to this debate as an “academic kerfuffle,” yet we think the debate has been constructive because it has brought greater clarity over the ideas shaping austerity policies in both the United States and Europe. We would welcome a formal substantive response by Reinhart and Rogoff to our published CJE paper.

The Reinhart-Rogoff research is best known for its result that, across a broad range of countries and historical periods, economic growth declines dramatically when a country’s level of public debt exceeds 90% of gross domestic product. Working with the Reinhart-Rogoff data set, we show that there is no evidence to support this claim.First, in their work with a sample of 20 advanced economies over 1946-2009, they report that average (i.e. the mean figure in formal statistical terms) annual GDP growth ranges between about 3% and 4% when the ratio of public debt to GDP is below 90%. But they claimed that average growth collapses to -0.1% when the ratio rises above a 90% threshold.

However, Herndon, Ash, and I show that these results were based on three sets of mistakes: (1) exclusion of some of the available data; (2) coding errors with their working Excel spreadsheet; and (3) inappropriate methods for averaging statistics to produce their overall results. For example, because of these data-handling problems, a one-year experience in New Zealand in 1951, during which economic growth was -7.6% and the public debt level was high, ends up exerting a major influence on their overall findings. Indeed, this 1951 experience in New Zealand exerted equal influence on their overall findings as 19 years in which the UK economy operated with high public debt/GDP ratios. The UK economy experienced postwar growth at an average rate of 2.4% over these 19 years.

When we performed accurate recalculations using Reinhart-Rogoff’s dataset, we found that, when countries’ debt-to-GDP ratio exceeds 90%, average growth is 2.2%, not -0.1%. We also found that the relationship between growth and public debt varies widely over time and between countries. For example, for the years 2000 to 2009, the average GDP growth rate for countries carrying public debt levels greater than 90% of GDP was either comparable to or higher than those for countries whose public debt/GDP ratios ranged between 30 and 90% .

In their response to our April 2013 working paper, Reinhart and Rogoff say that their incorrect GDP growth figures, based on average (i.e. mean) GDP growth rate calculations, were never what they had emphasized in any case, either in the 2010 paper itself or subsequently. They argued that they had always given more credence to the alternative measures of GDP growth reported in their 2010 paper, which are the median figures (medians being another way to measure central tendencies in data). Most importantly, they observed that, using either our corrected average figures or the medians from their 2010 paper, GDP growth declines by about one percentage point when the public debt/GDP ratio crosses the 90% threshold.

Yet there were serious problems with Reinhart and Rogoff’s response. The most obvious was that the median GDP growth figures they reported in their 2010 paper are distorted by the same errors that affected their average growth figures. Indeed, in an “Errata” memorandum responding to our working paper, when Reinhart-Rogoff themselves corrected their Excel coding error and included all the data for all countries in their spreadsheet, the differences in median economic growth rates falls by only 0.4 percentage points between countries whose public debt/GDP ratio was between 60-90% and those where the ratio was over 90%—from 2.9 to 2.5% median GDP growth. In other words, based on Reinhart-Rogoff’s own recalculations in their Errata memo, we actually see, with their preferred median figures, still stronger evidence that there is no significant drop off in growth when a country passes the 90% public debt/GDP threshold. Reinhart-Rogoff themselves do not highlight this result in their Errata memo.

Reinhart and Rogoff also initially defended their 2010 findings by referring to the results with their dataset spanning 220 years, from 1790-2009. However, as we show in our CJE paper, they made the same statistical errors generating these 220-year calculations, and their results are similarly distorted. For example, with the 1790-2009 data, a one-year experience in Norway in the 60-90% public debt/GDP category—when economic growth happened to be an exceptionally high 10.2%—is accorded equal weight with 23 years in Canada, 35 years for Austria, 42 years for Italy, and 47 for Spain. We show that when properly recalculated, there is no difference at all in the average GDP growth rates over 1790-2009 for the countries in Reinhart-Rogoff’s dataset in which public debt ranges between 90-120% relative to countries in which public debt/GDP fell between 60-90%.

What does our critique of the Reinhart-Rogoff research mean in terms of economic policy? Consider a situation in which a country is approaching the threshold of a 90% public debt/GDP ratio. It is simply not accurate to assume that these countries are reaching a danger point where economic growth is likely to decline precipitously.

Rather, our corrected evidence shows that a country’s growth may be somewhat slower once it moves past the 90% public debt-to-GDP level. But we cannot count on this being true under all, or even most, circumstances. Are we considering the US demobilization after World War II or New Zealand experiencing a severe one-year recession? Our evidence shows that one needs to ask these and similar questions, including whether slow growth was the cause or consequence of higher public debt, before we can draw meaningful conclusions.

More generally, as my co-authors and I write in concluding our CJE paper, “policymakers cannot defend austerity measures on the grounds that public debt levels greater than 90% of GDP will consistently produce sharp declines in economic growth.”

Robert Pollin – University of Massachusetts-Amherst
Robert Pollin is Distinguished Professor of Economics at the University of Massachusetts-Amherst and Co-Director of the Political Economy Research Institute (PERI). He is the co-author of “Does high public debt consistently stifle economic growth? A critique of Reinhart and Rogoff” (available to read for free for a limited time) with Thomas Herndon and Michael Ash in the Cambridge Journal of Economics.