One of the widely accepted hurdles facing female candidates is navigating the fine line between seeming tough enough to hold office and appearing unfeminine and overly aggressive. Yanna Krupnikov and Nichole Bauer examine whether voters actually punish female candidates for being “too tough.” They find that voters’ opinions of candidates from their own party were unaffected by aggressive behavior, but that they judged female opposition candidates more harshly than their male counterparts for such conduct.

Take Linda McMahon’s 2010 Senate race in Connecticut; when McMahon lost, the Wall Street Journal speculated that it was her “tough” image—which emerged through a series of negative ads—that cost her the race. In a post-mortem of Meg Whitman’s failed gubernatorial campaign, the Washington Post concluded she got “tripped up by a Hillary-esque emphasis on being ‘tough enough.’” And, of course, there is Hillary Clinton, the quintessential example of the “tough enough” double standard. 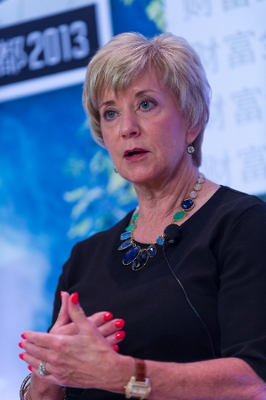 This is a compelling narrative, but does this hold up to closer scrutiny? Put another way, do voters systematically punish female candidates for being “too tough”? We considered this question using a national study. Our study presented people with possibly the most extreme case of a candidate “acting tough”—attacking his or her opponent. What we found suggests that female candidates certainly could be punished for displaying too much aggression during a campaign, but only in very specific, limited cases.

There is certainly reason to believe that the “tough enough” double standard could limit female candidates. Psychology research shows that gender stereotypes suggest women should be more nurturing, gentle, and sympathetic compared to men. When people encounter women who don’t conform to this stereotype, they react negatively. Acting tough by attacking your opponent, being vocally critical, or even discussing national defense breaks with traditional stereotypes about women. Therefore, it is not unreasonable to suspect that people might not like female candidates who behave in this way.

But, psychology also tells us this story might be more complicated. People need to be motivated before they will use stereotypes to make a negative judgment. This motivation often comes if people already dislike the person in question. Conversely, people are unlikely to use stereotypes to judge a person they like. So, if a voter actually likes a female candidate to begin with, it won’t matter if she acts tough and breaks with gender stereotypes because the voter is not motivated to hold these breaks in gender stereotype against her.

We recruited 800 American adults to participate in a study that considers whether individuals actually punish tough and aggressive female candidates. We presented each participant with two candidates competing for a Senate seat. While in our full study we also consider same-gender races, here we focus on different-gender pairings. One set of participants were assigned to a simple control group where they merely learned the gender and party of the candidates, but were not told anything about the types of ads these candidates sponsored.

This study lets us test the traditional media narrative that individuals do not like tough female candidates, or the alternative story we suggest. If the traditional media narrative is correct, the female candidate should suffer every time she goes negative regardless of her party or if she instigated the negativity.  But, if the story is more complicated, then participants should only punish the female candidate if they do not like her. And, people should especially dislike an instigator of the opposing party.

We consider whether participants “punish” female candidates in based on their willingness to vote for her. One way to view punishment is to compare our participants’ thoughts about the candidate when he or she is the instigator of negativity versus when that same candidate is the responder.

Figure 1: Level of Punishment for Instigating by Candidate Gender 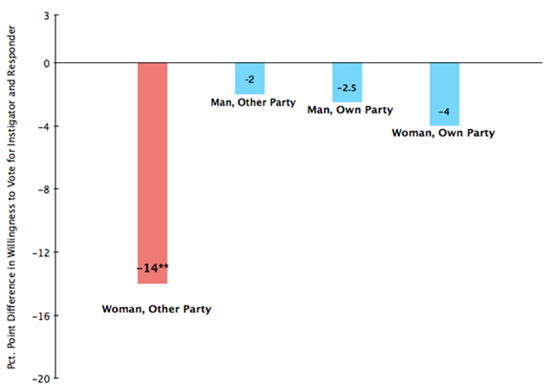 Importantly, the participants are much more lenient toward the male candidate of the opposing party. Sure, they punish him when he instigates, but significantly less harshly than they punish the female candidate.

Put another way, our results suggest that voters are unlikely to punish a female candidate of their own party for, essentially, doing her job and trying to win an election for them. Although they may be may be more than happy to punish female instigators of the opposing party, people don’t have any motivation to worry that their own candidate is breaking with gender stereotypes and acting “too tough” even when she’s an instigator.

Negativity, of course, is only one example of “acting tough.” Nonetheless, our study—the results of which have been replicated with an additional experiment—suggests that there is a limitation to the media story of acting tough. Sure, some people might judge female candidates for “acting tough” but its unlikely they will punish their own beloved candidate for this type of campaigning.  Returning to the McMahon 2010 campaign, perhaps it wasn’t that people disliked McMahon because of her negative ads, but that they judged her negative ads because they already didn’t like her. After all, McMahon took a “softer approach” in 2012 and she still lost.

This article is based on the paper ‘The Relationship Between Campaign Negativity, Gender and Campaign Context’ in Political Behavior.