One of the Internet’s major influences on our daily lives is in the way that we buy, making shopping much more convenient and bringing greater choice to consumers. But how has online shopping influenced how much we pay? Using data from nearly 1/3 of U.S. domestic airline ticket transactions Anirban Sengupta and Steven N. Wiggins find that buying an airline ticket online is about 12 percent cheaper than buying the same ticket offline.

The sale of products on the Internet has dramatically risen over the past decade invoking direct competition with traditional outlets for virtually all products. While theoretically the Internet reduces search costs and induces more price competition; the empirical results supporting these theoretical predictions have been mixed. For example, Brynjolfsson and Smith (2000), and Morton Zettlemeyer, and Silva-Rissio (2001) find evidence of modestly lower prices on the Internet for books and automobiles respectively; while Lee (1998) focused on cars and Bailey (1998) focused on books, CDs and software, find higher online prices.

In recent research, we investigated the effects of internet purchases on airline fares in the US domestic market. Our data include ticket characteristics, restrictions, and flight load factors, together with dates and channel of purchases. Controlling for ticket and flight characteristics, we found that online purchasers pay about twelve percent less than offline purchasers.  This difference seems rooted in more efficient shopping.

Internet penetration is substantial in airlines where for particular city-pairs (routes) the Internet share exceeds fifty percent of transactions.  Unfortunately, due to a lack of adequate data, no research apart from ours, has estimated the direct effect of the Internet on airline fares at the transaction level.

Airlines set their fares by first bundling various combinations of ticket restrictions like refundability, advance purchase, and travel and stay restrictions.  There are a myriad of such combinations.  For each combination of characteristics they then set both the fare for that combination and decide how many seats to offer for sale.  They also adjust the offerings of different fare/restriction combinations during the booking process.

Given the availability of fares contemporaneously in both sales channels, we are essentially measuring the effects of shopping intensity. One of the major benefits of the Internet for airline ticket purchases is that it provides customers’ with the opportunity to buy for themselves rather than through travel agents.  Hence the direct effects of Internet purchase on fares stem from more careful shopping by customers as they select for themselves the combination of ticket characteristics and fares that best meets their needs.

To provide a simple understanding of the differences between buying airline tickets online and offline Figure 1 compares the average online and offline fares corresponding to the number of days in advance the tickets were purchased on four different, large carrier-routes.  Note that the date of departure is the left-hand axis.  In each carrier-route, if one compares average fares based on days-in-advance prior to departure, online customers pay significantly less than offline. All of these comparisons are at the carrier-route level, so that they control for simple differences in the provider and the market in which the product is sold. 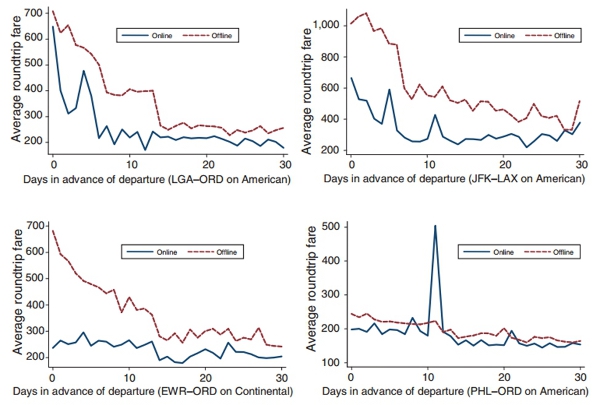 Figure 2 slices the data a different way by comparing average online and offline fares for different types of restrictions on tickets rather than days in advance. The hypothesis of lower online fares holds firm in this data dissection as well. 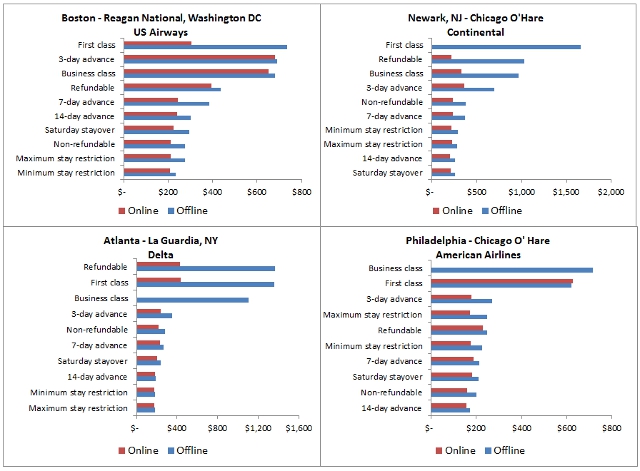 The above analyses do not control for other factors that may simultaneously affect fares. This can be achieved within a multivariate regression framework across all 150 routes. We use an instrumental variable regression to estimate the effect of ticket characteristics, market structure, sale channel, carrier, and route characteristics on fare. In carrying out these regressions we rely on standard factors the economics literature has identified as influencing airline fares, such as carrier market share, number of days in advance ticket purchased, refundability, advance purchase requirements, population, and per capita income. Our results show that purchases made on the Internet on average are 12 percent lower than those made though physical travel agents even after all factors in terms of route, carrier, flight, and ticket characteristics are accounted for (for a full list please see our paper).

Another way to examine online/offline differences is to look within specific departure times within the travel day for tickets purchased during comparable intervals prior to departure.  For example, Figure 3 presents data on tickets purchased for travel between New York City’s JFK airport and Los Angeles’s LAX.   These tickets are divided into groups for travel during certain times of the day.  Figure 4 then compares the online and offline fares that were purchased during comparable intervals prior to departure (e.g. purchase during same week as departure, purchase a week before departure, etc.). The difference between online and offline fares is comparable to the 12 percent difference based on the regression model. 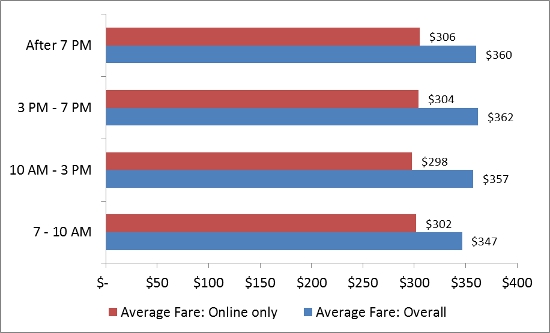 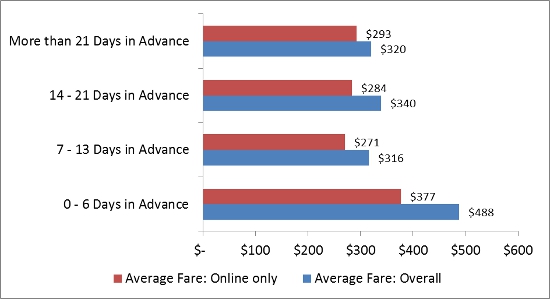 Using comprehensive controls for market, ticket, carrier, and route characteristics in the largest 150 domestic routes in US, our analysis provides robust evidence that customers who purchased tickets purchased on the Internet on average paid approximately 12 percent less than those purchased tickets through traditional travel agents. This finding is robust when data is analyzed more narrowly at the carrier and route level, during specific travel times, and for various purchase windows prior to departure. Our data contains tickets that were contemporaneously available both online and offline, so that the lower prices on the Internet likely stems from communication or agency problems between customers and travel agents.  While travel agents have access to the same fares, the process of communicating the large array of restriction combinations and the willingness of customers to accept particular restrictions is problematic.  Regarding agency issues, travel agents do not face the same incentives as consumers who spend their own money on tickets.   It may also be true that a greater percentage of offline tickets are reimbursed, resulting in offline customers using a different tradeoff between price and convenience.

This article is based on the paper “Airline Pricing, and Ticket Characteristics on and off the Internet.” In the American Economic Journal: Economic Policy.

Steven N. Wiggins – Texas A&M University and Charles River Associates
Steven N. Wiggins is a Senior Consultant at Charles River Associates. He is an expert in industrial organization, regulation, and antitrust. He is a professor of economics at Texas A&M University and has served as the George and Mary Jordan professor of economics and public policy and a university scholar in the Honors Program at Texas A&M. He has been a distinguished lecturer in Germany on American Economic Institutions. Dr. Wiggins is affiliated with the firm’s College Station, Texas, office.