In 2010, the US Census Bureau conducted the first large-scale survey of management practices in America, gathering data on more than 30,000 manufacturing plants. Nicholas Bloom and colleagues find strong links between establishments’ performance and the quality of their systems of monitoring, targets and incentives.

Business schools have long stressed the importance of good management, but until recently economists have been reluctant to concur given the paucity of data beyond case studies. But over the last few years, researchers have started to build international management databases, analysis of which makes it possible to explore the role of management practices in driving differences in firm and national performance.

One of the most detailed recent datasets comes from a partnership between LSE’s Centre for Economic Performance (CEP), Stanford University and the US Census Bureau, which in 2010 conducted a large management survey of over 30,000 manufacturing establishments. We have conducted the first analysis of the data gathered by the Management and Organizational Practices Survey (MOPS). The MOPS, which comprised 36 multiple-choice questions about the establishment, took about 20 to 30 minutes to complete. The questions were divided into three parts: management practices (16 questions), organisation (13 questions) and background characteristics (7 questions).

We aggregate the responses into a single summary measure of structured management scaled from 0 to 10 represents an establishment that selected the bottom category (little structure around performance monitoring, targets and incentives) on all 16 management dimensions; and 1 represents an establishment that selected the top category (an explicit focus on performance monitoring, detailed targets and strong performance incentives) on all 16 dimensions.

A final set of questions asked about the use of data in decision-making (with response options ranging from ‘does not use data’ to ‘relies entirely on data’); and how managers learn about management practices (‘consultants’, ‘competitors’, etc).

Our initial analysis of these data shows several striking results. First, structured management practices for performance monitoring, targets and incentives are strongly linked to more intensive use of information technology (IT). Plants using more structured practices have higher levels of investment in IT per worker and more investment in IT overall, and they conduct more sales over electronic networks. Second, as Figure 1 illustrates, more structured practices are tightly linked to better performance: establishments adopting these practices display greater productivity, profitability, innovation and growth. 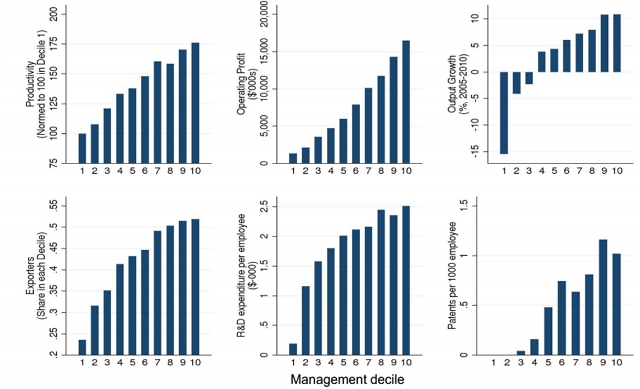 Note: The management score is the unweighted average of the score for each of the 16 questions, where each question is first normalized to be on a 0-1 scale. The sample for panels 1, 2 and 4 is all MOPS observations with at least 11 non-missing responses to management questions and a successful match to the Annual Survey of Manufactures (ASM), which were also included in ASM tabulations, and have positive value added, positive employment and positive imputed capital in the ASM. The sample in panel 3 is similar to panel 1, but also conditions on nonmissing total value in the ASM 2005. The sample for panels 5 and 6 is similar to panel 1, also conditioning on non-missing R&D or patents requests count in the BRDIS survey. Management deciles are calculated using 2010 management scores for all panels. The deciles are re-calculated for the different samples. The figures are unweighted. Source: IT and Management in America’

Fourth, more structured practices are more likely to be found in establishments that export, that are larger (or are part of bigger firms) and that have more educated employees. Establishments in America’s South and Midwest have more structured management practices on average than those in the Northeast and West. The reasons for this geographical difference are not yet clear, but it may be partly explained by such factors as firm size and industry, and state-specific policies.

Fifth, management practices appear to have become more structured between 2005 and 2010. Breaking down the 16 dimensions into sub-groups, we find that most of the rise in structured management has come in data-driven performance monitoring. This could reflect the increasing use of IT, which makes it easier for establishments to collect, display and analyse performance data.

To investigate the sources of these improvements in management, we examine where the managers learned about new practices. The most common source, reported by over half of the establishments, is a firm’s headquarters. This suggests that one explanation for the more structured management of multi-establishment firms is the ability of individual establishments to learn from others within the same firm.

Trade associations and conferences are noted by just under half of establishments as a source of new management practices. Next come consultants, reflecting the role of paid management consultants in helping firms adopt modern practices. And after that come customers and suppliers, which each account for more than a third of respondents’ reported sources of new practices.

This article originally appeared in the Spring 2014 issue of CentrePiece, the magazine of the Centre for Economic Performance (CEP) at LSE, and summarizes summarises ‘IT and Management in America’ by Nicholas Bloom, Erik Brynjolfsson, Lucia Foster, Ron Jarmin, Megha Patnaik, Itay Saporta-Eksten and John Van Reenen, CEP Discussion Paper No. 1258.

Nicholas Bloom – Stanford University, LSE Centre for Economic Performance
Nick Bloom is a Professor of Economics at Stanford University and a research associate in CEP’s productivity and innovation program. His research interests are investigating the causes and consequences of economic uncertainty. He also works on understanding differences in management and organizational practices across firms and countries. He previously worked as a research economist at the Institute for Fiscal Studies, a policy advisor at HM Treasury and as a management consultant at McKinsey & Company.

Erik Brynjolfsson – MIT
Erik Brynjolfsson is the Schussel Family Professor at the MIT Sloan School, the Director of the MIT Center for Digital Business, and a Research Associate at the National Bureau of Economic Research. His research examines the effects of information technologies on business strategy, productivity and employment. His recent work studies data-driven decision-making and the role intangible assets. His recent books include Wired for Innovation: How IT is Reshaping the Economy and Race Against the Machine: How the Digital Revolution is Accelerating Innovation, Driving Productivity and Irreversibly Transforming Employment and the Economy. You can download his papers from http://digital.mit.edu/erik or follow him on Twitter at @erikbryn.

Itay Saporta- Stanford University
Itay Saporta-Eksten is a fifth-year Ph.D. candidate in the Stanford Department of Economics. His main fields of interest are macro and labor economics with a special focus on business cycles. He is currently involved in research projects studying the role of mobility in the great recession, the aggregate effects of uncertainty shocks, the dynamics of R&D over the business cycle and the importance of labor supply as a self-insurance mechanism. He previously worked as a product manager in the high-tech sector.