The expansion of Social Security is an important reason why U.S. health spending has increased so much.

The expansion of Social Security is an important reason why U.S. health spending has increased so much.

In recent decades, spending on healthcare in the U.S. has continued to rise to unprecedented levels, raising questions over the sustainability of an ageing population. Kai Zhao investigates why this increase has been so dramatic, and using new research, argues that the dramatic expansion of Social Security may be one of the main causes. He explains that Social Security’s expansion means more money is redistributed towards the elderly, who are also more likely to spend more on healthcare than younger groups. The growth in Social Security also means that health spending growth has been much faster among the elderly than among the non-elderly.

Aggregate health care spending as a share of GDP has more than tripled over the last half century in the United States, from approximately 4 percent in 1950 to 13 percent in 2000 (see Figure 1). Why has U.S. health spending as a share of GDP increased by so much? This question has attracted growing attention in the literature. Several explanations have been proposed, such as increased health insurance and economic growth. However, the Congressional Budget Office (2008) has shown that these existing explanations together only account for up to half of the rise in US health spending over the last half century, suggesting that there is still a large portion of the rise in health spending remaining unexplained. 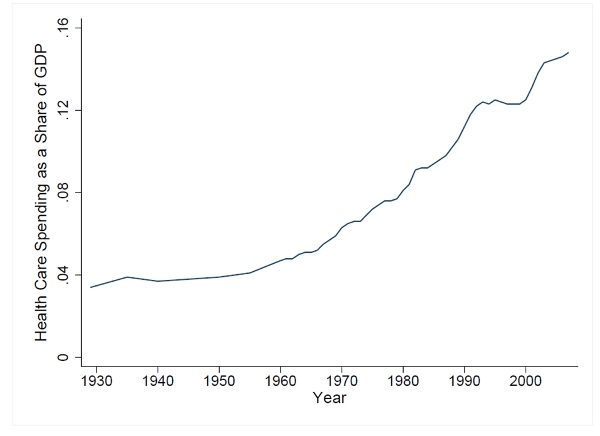 Figure 2: US Social Security: Total Expenditures/Receipts as a Share of GDP 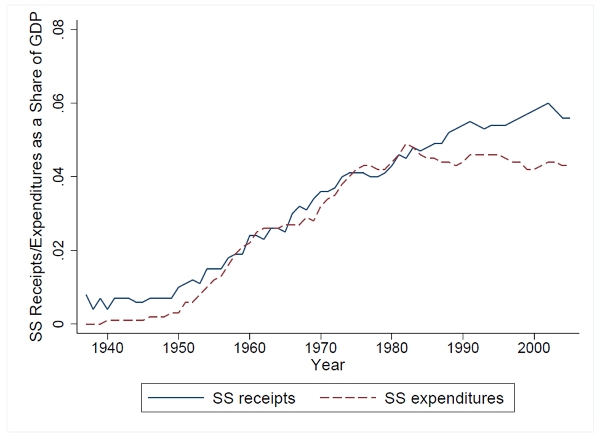 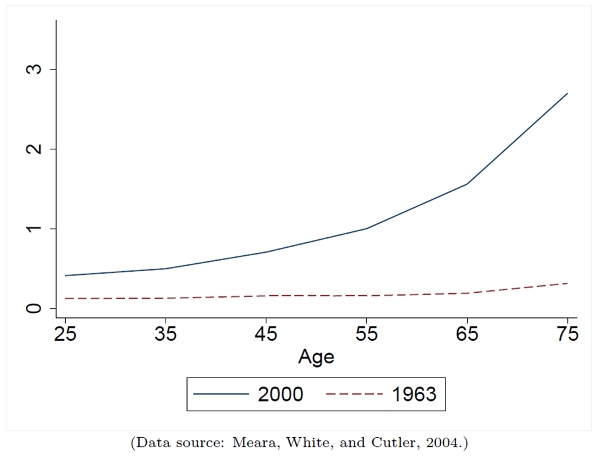 My findings also have some interesting policy implications. For instance, they suggest that Social Security has a significant spill-over effect on public health insurance programs (e.g. U.S. Medicare) via its impact on health spending. Medicare covers a fixed fraction of health spending for the elderly. Therefore, as Social Security induces the elderly to spend more on health care, it also increases the insurance payments from Medicare, thus raising its financial burden. My analysis shows that the payroll tax rate required to finance the Medicare program would drop from 3.1 percent to 1.0 percent if Social Security were eliminated in the economy. This finding is particularly interesting because Social Security and Medicare are the two largest public programs in the United States and both are currently under discussion for reforms. It suggests that the spill-over effect of Social Security on Medicare may be large, and thus should be taken into account by future studies on policy reforms.

This article is based on the paper, ‘Social security and the rise in health spending’, in the Journal of Monetary Economics.