Recent years have seen growing calls for the greater representation of women in political bodies and corporate boards. But does greater representation for women lead to more power in decision making? Using data from an empirical study of group interaction around deliberation, J. Baxter Oliphant, Tali Mendelberg, and Christopher F. Karpowitz find that the rules around how decisions are made matter; when decisions are majority-based, and there are enough women to control the decision, then men begin to treat women with more respect. When decisions need to be unanimous, minority men are empowered and do not modify their behavior towards women.

Scholars and advocates have long argued that political bodies should be at least 30 percent female if women are to be adequately represented. Below that number, men tend to ignore women and push aside their concerns. However, increasing women’s numbers might not be enough if the rules used to make decisions do not also encourage women’s participation. Using data from one of the most comprehensive empirical studies of gender and deliberation to date, we found that unless decision-making rules foster communication processes that support women’s authority, women will not be fully represented. Unanimous decision rules protect women from men’s aggressive communication tactics – when women are few. On the other hand, as women’s numbers increase, majority rule better facilitates women’s authority.

Communication processes are the key to connecting women’s numbers with deliberative outcomes. Gendered roles and expectations construct women’s voices as less authoritative, which puts them at a disadvantage in political settings. How language is used in these settings will reinforce women’s lower status and authority, and the decision-making rules and the gender composition of the group can either elevate or depress women’s authority. When rules and numbers interact to support women’s speech, then men will be less likely to interrupt them dismissively, the group will develop a more supportive sense of rapport, and women’s contributions to the discussion will be valued more.

The act of speaking provides an opportunity to establish authority and status as a valuable member of the group, but the group’s reaction is what affords the speaker this status. To measure how a group supported and respected women’s speech, we analyzed the patterns of interruptions in a sample of groups convened to make a collective decision. Interruptions are significant for authoritative representation because they reinforce participants’ status and build social rapport. We scoured each group’s audio for instances when participants interrupted each other. Interruptions were first identified through a computer program and verified manually; once verified we classified each interruption as negative, positive or neutral.

We conducted 94 discussion groups and randomly assigned participants to five-person groups with differing gender compositions. In addition, each group was instructed – again, by random assignment – to use either unanimous rule or majority rule for selecting a principle for distributing income fairly. They were asked to distribute income they would earn in the experiment as well as assume that their decision would apply to society. The groups were held in two locations in the United States, one liberal and secular, and one conservative and religious. The number of women in the group ranged from zero to five. For each participant we created a number of measures to gauge how supportive or dismissive others in the group were of his or her ideas. These measures focus on how negative or positive were the interruptions a person received and how frequently such interruptions occurred. 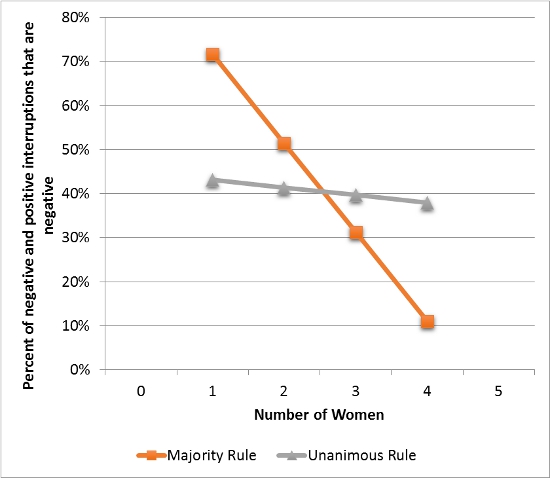 Figure 1 shows the predicted effect of decision rule and gender composition on the proportion of negative interruptions women receive from men. Men negatively interrupt women less as women’s numbers increases, but only when the decision rule favors their increasing numbers. Majority rule gives the most status to the members of the group who form the majority and, thus, can control the decision. When there are enough women to do that, men begin treating them with more respect. However, even when women are few, all is not lost, because a rule that empowers each member will reduce the negativity that women experience from men. So unanimous rule protects women when they are one or two in a group.

But notice that a unanimous rule actually becomes a hindrance as women’s numbers grow. That is, women’s proportion of negative interruptions does not decline substantially under unanimous rule. Why? Because unanimous rule empowers any minority, including groups in which men are outnumbered by women. Thus, when minority men are empowered by the decision rule, they do not modify their behavior toward women in the same way that they do under majority rule.

As negative interruptions decrease, women also begin to receive positive interruptions – expressions of affirmative endorsement such as “yeah,” “I agree,” or “good point” – more frequently. On average, a woman in a group with 80% women and majority rule receives 2.5 times the number of positive interruptions that a single woman in a group with majority rule receives. When women are empowered, in other words, they receive active signals of support and encouragement. In addition, on the rare occasions when men do negatively interrupt women where women are empowered, the men tend to soften their interruptions in ways that increase women’s status. Unanimous rule, by contrast, can actually decrease men’s respect for women’s authority as the number of women increases.

These patterns of interruptions are not mere linguistic footnotes to the discussion. The negative interruptions men issue women matter – they change others’ perceptions of women’s influence. After deliberation, we asked participants to vote confidentially on the most influential member in their group. The participants typically disagreed on who that was, so each person received few votes, on average. Still, women’s votes dropped by about two-thirds when they were negatively interrupted often or positively interrupted little.

Groups that do not encourage women’s authoritative representation decrease women’s influence. A simple solution is to set an encouraging tone. Groups can have healthy disagreements while still issuing frequent support to speakers and developing a sense of group rapport. Women benefit especially by this affirmation and encouragement, because otherwise their speech is treated less authoritatively than men’s. Political institutions can overcome these negative effects by increasing women’s numbers and by developing rules that recognize the need to treat all voices equally in deliberation.

The results we discuss here for interruptions hold across a number of other aspects of deliberative communication. Employing unanimous rule when women are few and majority rule when they are many overcomes gender differences in the amount of time participants speak, in women’s likelihood of raising topics that are of distinctive importance to them, and in women’s willingness to advocate publicly for positions that more closely mirror their private preferences. Similar patterns of participation also hold in the real-world setting of school boards. Taken together, these various results converge on the notion that women’s standing – the sense in which they become full and equal contributors to the group – is facilitated by the norms of status and social rapport that the group develops. By attending to the interaction of decision rule and gender composition, organizers of decision-making bodies can structure groups such that women’s authoritative representation is enhanced and previously marginalized voices will receive the support that they are likely to require.

This article is based on the paper Gender Inequality in Deliberation: Unpacking the Black Box of Interaction in Perspectives on Politics.

Christopher F. Karpowitz and Tali Mendelberg are the authors of The Silent Sex: Gender, Deliberation, and Institutions, which comes out this summer from the Princeton University Press. The Silent Sex shows how the gender composition and rules of a deliberative body dramatically affect who speaks, how the group interacts, the kinds of issues the group takes up, whose voices prevail, and what the group ultimately decides. It argues that efforts to improve the representation of women will fall short unless they address institutional rules that impede women’s voices.

Tali Mendelberg – Princeton University
Tali Mendelberg is Professor of Politics at Princeton University. She studies inequality and politics. Her book The Race Card: Campaign Strategy, Implicit Messages, and the Norm of Equality, won the American Political Science Association’s Woodrow Wilson Foundation Award for “the best book published in the United States during the prior year on government, politics or international affairs.” Her areas of specialization are political communication; gender; race; class; public opinion; political psychology; and experimental methods.

Christopher F. Karpowitz – Brigham Young University
Christopher F. Karpowitz is Associate Director of the Center for the Study of Elections and Democracy (CSED) and Associate Professor of Political Science at Brigham Young University. His research interests include political psychology, political behavior, political communication, and political participation. Much of his research explores how citizens participate in and experience democratic institutions and processes, with special attention to democratic and deliberative theory. He is a co-founder of the CSED Research Lab at BYU.