In the minds of many, the government corruption tends to be a problem largely limited to developing countries. Yet, in new research Cheol Liu and John L. Mikesell, find that corruption across U.S. states is a major – and costly – problem. They find that the ten most corrupt states could have reduced their annual expenditure by more than $1,300 per capita, if their level of corruption was reduced to the states’ average.  They also argue that public corruption influences how state resources are allocated to favor more “bribe-generating” spending such as construction, highways, correction, and police protection ahead of education, health and hospitals.

Is America corruption-free? Realization that international development requires good governance has directed the concern of international organizations such as the World Bank and the IMF towards corruption in developing countries. But, corruption of U.S. government officials is also serious. Recently, Rod Blagojevich, former governor of Illinois, was convicted on a wide range of corruption charges, including selling Obama’s Senate seat in exchange for personal gain. He was finally sentenced to 14 years in prison. More than 25,000 U.S. public officials were convicted for violation of federal corruption laws from 1976 to 2009.

Can this public corruption affect the size U.S. state spending? From our panel data analyses over the period of 1997 – 2008, we find that public officials’ corruption caused state spending to be artificially elevated. The ten most corrupt states could have reduced their total expenditure annually by $1,308 per capita, on average, if their corruption level was at the level of the states’ average: 5.2% of mean per capita expenditure.

How can we explain these results? It is well known academically that public officials’ self-interested behaviors may cause government spending to be larger than optimal, or “excessive.” This budget-maximizing behavior by self-interested bureaucrats will be intensified by corrupt bureaucrats. Corruption is defined as the “misuse of public office for private gain.” Corruption takes place when public officials’ selfishness is pursued to the extreme. They violate laws and regulations in pursuit of their private interests, which are called “predatory” (illegal) behaviors. State budgets will become even larger with a higher degree of corruption as a consequence.

How then did public corruption influence resource allocations? States with a higher level of corruption are likely to favor capital, construction, highways, total salaries and wages, borrowing, correction, and police protection. Corrupt states spend less on education, health, and hospitals. At the expense of social sectors, corruption is likely to distort states’ public resource allocations in favor of higher potential “bribe-generating” spending and items beneficial to public officials directly.

State spending on construction, capital, and highway projects often involves large expenditures, a small numbers of contractors and clients, and a lack of transparency, making it vulnerable to bribes, kickbacks and extortion. Corrupt states are more likely to engage in deficit financing, which tends to conceal the true cost of government spending from the public. They spent more on high wages, which benefit government employees. They also spent more on law enforcement and on prisons, reflecting both the legal costs of corruption and the fact that prison construction and operation are potentially lucrative. Note that the harmful impact of corruption on education persists even after expenditures on education are divided into subcategories: elementary and secondary education and higher education. These results imply that public officials’ corruption reduces states’ investment in education overall.

Which states are most corrupt and least corrupt? Table 1 ranks states according to our indexes of corruption by averaging them over the time period of 1976-2008. The lower the ranking, the more a state is corruption-free. According to the indexes, the ten most corrupt states are Mississippi, Louisiana, Tennessee, Illinois, Pennsylvania, Alabama, Alaska, South Dakota, Kentucky, and Florida and the ten least corrupt states are Oregon, Washington, Minnesota, Nebraska, Iowa, Vermont, Utah, New Hampshire, Colorado, and Kansas. Where does your home state rank?

Note: The first column indicates the number of convictions per population, the other per public employee. Data Source: U.S. Department of Justice, Reports to Congress on the Activities and Operations of the Public Integrity Section, 1976-2008

Figure 1 illustrates the corruption map of the U.S. states.

Researchers have scrutinized economic, political, and institutional determinants of government expansion under the Great Recession. And state governments have made various efforts to balance their budgets. Disappointingly, however, state budget deficits have been increasing. Preventing public officials’ corruption and restraining spending induced by public corruption should accompany the other current efforts at fiscal constraint, and special monitoring and control over corruption-prone spending items are required. Increases in state’s expenditures on capital, construction, highways, and borrowing are not problematic in themselves. Those investments are crucial for the state’s economic growth and development. However, policy makers should pay close attention so that public resources are not used for private gains of the few but rather distributed effectively and fairly for various purposes.

This article is based on the paper ‘The Impact of Public Officials’ Corruption on the Size and Allocation of U.S. State Spending’ in Public Administration Review.

Cheol Liu – City University of Hong Kong
Cheol Liu is assistant professor of the Department of Public Policy at City University of Hong Kong. His research agenda is to diagnose various risks in fiscal health of governments and identify implementable proposals for reform. The impact of public corruption on economic, political, and administrative variables is one of his major research interests. He also has a significant interest in the responsiveness of different revenue instruments to fiscal shocks.

John L. Mikesell – Indiana University
John L. Mikesell is Chancellor’s Professor of Public and Environmental Affairs at Indiana University.  His research focuses on finances of subnational governments, budget systems and processes, and sales and property taxation. His textbook Fiscal Administration, Analysis and Applications for the Public Sector is widely used in graduate public administration programs.  He holds a BA from Wabash College and MA and PhD in economics from the University of Illinois-Urbana.

Posted In: Cheol Liu | Elections and party politics across the US | John L. Mikesell | Urban, rural and regional policies 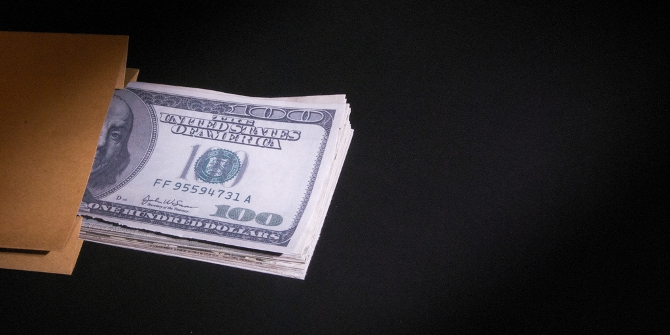