At the end of May, President Obama announced that a deal had been struck to free Sergeant Bowe Bergdahl from captivity in exchange for the release of five Taliban commanders. Obama has come under heavy criticism for the decision, as questions have surfaced concerning Bergdahl’s disappearance and service record. Daniel Strieff argues that Obama was right in making the deal to free Bergdahl, but erred in treating it as a celebratory moment. He writes that Obama should have focused on his commitment to bring home all American prisoners of war, rather than on Bergdahl’s military service and his parents.

Barack Obama surely did not anticipate this reaction when, flanked by the parents of U.S. Army Sgt. Bowe Bergdahl, he announced from the Rose Garden on May 31 that he had struck a deal to free the couple’s 28-year-old son from captivity in exchange for five Taliban commanders held at Guantanamo Bay. In the following days, Bergdahl, who returned to the United States early Friday, was attacked as a deserter, traitor and collaborator due to the murky circumstances of his capture. President Obama himself has faced the most intense criticism, however, as conservatives and others claim the president broke the law by failing to notify Congress of the prisoner-swap, which they contend ultimately threatens American lives.

Yet despite the distressing political rhetoric that has characterized the American debate, the White House’s botched public relations campaign surrounding the Bergdahl deal and not the prisoner-swap itself represents the most searing indictment of the administration’s operational acuity. The president erred from the beginning. In particular, the ham-handed Rose Garden announcement ensured the deal would become immediately politicized. The next day, National Security Advisor Susan Rice said on Sunday talk shows that Bergdahl had served with “honor and distinction” in Afghanistan.  Rice – or at least her advisors – should have known better. In fact, Bergdahl’s service and the terms of his capture had been called into question in various reports during the years of his captivity. Specifically, several reports have suggested Bergdahl walked off his eastern Afghan military outpost in June 2009, raising the strong possibility that he had gone absent without leave or deserted his unit. Either action constitutes a crime in the U.S. military.

The administration should have been prepared for the possibility that many members of the military would have at best ambivalent feelings about blood and treasure expended to bring home a possible deserter – perhaps the most reviled crime in the armed forces. That has left the administration with few creditable allies. Likewise, the White House displayed remarkable lack of political dexterity by failing to anticipate that its political opponents would seize on the release of Taliban fighters to Qatar as consonant with the (largely untrue, but effective) narrative of a president weak on national security. That charge, of course, is difficult to defend unless its proponents are similarly willing to characterize as soft on “terrorism” the Israelis, who in 2011 exchanged hundreds of Palestinian prisoners for one captured Israeli soldier.

Instead, Obama should have opted for a lower key approach to the prisoner-swap – one that did not feature special announcements or treat it as a celebratory moment. Moreover, the administration should have stuck to a single, overriding rationale for the deal. On this latter point, Obama got the words, if not the venue right when he said in his May 31 announcement that the United States had “made an ironclad commitment to bring our prisoners of war home. That’s who we are as Americans. It’s a profound obligation within our military, and today, at least in this instance, it’s a promise we’ve been able to keep,” he said. “That’s why we’re never going to forget; we’re never going to give up our search for servicemembers who remain unaccounted for. We also remain deeply committed to securing the release of American citizens who are unjustly detained abroad and deserve to be reunited with their families, just like the Bergdahls soon will be,” he added.

Instead, the White House let administration members discuss with the press the merits of bringing Bergdahl home in terms of his honorable service in the war zone. This tack was particularly unfortunate because it then sent the administration rushing for a new narrative once questions resurfaced about Bergdahl’s disappearance and his service record. The simple, virtually unassailable logic of the need to rescue a captive American from unjust confinement and an unclear, but likely grim, fate would have been preferable. In addition, by trotting out Bergdahl’s parents in front the news cameras, Obama inadvertently opened up the couple, and particularly the father, to stringent, unfair and often ugly attacks, particularly from media pundits on the right.

Of course, it should come as no surprise that many of the attacks on Bergdahl and his family come from those, like right-wing darlings Ann Coulter and Michelle Malkin, who have never served in the military, much less in a war zone. A particularly ludicrous Fox News report suggested that, according to “secret documents,” Bergdahl had “declared jihad” while in captivity. The most troubling line of attack directed at Bergdahl’s father, Robert, came from Fox News host Bill O’Reilly, whose show is the highest rated current events program on American television. O’Reilly sneered that Robert Bergdahl “looks like a Muslim” because he had grown a long beard to mark his son’s captivity, and seemed “somewhat sympathetic” to the Taliban and Islam.

Not to be outdone, fellow Fox host Brian Kilmeade similarly criticized Robert Bergdahl’s facial hair. “I mean, he says he was growing his beard because his son was in captivity. Well, your son’s out now. So if you really don’t – no longer look like a member of the Taliban, you don’t have to look like a member of the Taliban,” Kilmeade said. This represents a particularly troubling strain of Islamophobia – that there was something inherently “wrong” about being Muslim, which the Bergdahls are in fact not – that had been largely on the fringes of American political discourse until now.

Yet is Obama responsible for this turn in the debate? The short answer is no. The longer answer is, unsurprisingly, more complex. By deciding to bring the Bergdahls in front of the cameras for his May 31 announcement, Obama greatly increased the chances that the couple would find themselves in the crosshairs of the president’s bitterest opponents.

Whatever the truth about Bowe Bergdahl’s service in Afghanistan, he volunteered to fight for his country, which is more than can be said for virtually all of the prisoner-swap’s critics. (A 2011 Pew Research Center poll found that a mere one-half of one percent of Americans had served in uniform in the decade following the Sept. 11, 2001, attacks.)

Five years in enemy captivity are bound to deeply scar even the most battle-hardened professional soldier. Obama was right to strike a deal to bring the young American home, but his administration did a disservice to Bergdahl and his family by mishandling the public relations and politics of the deal. A quieter approach should have been taken that would have allowed the Bergdahls the privacy to begin to move on with their lives rather than fend off personal attacks and death threats. 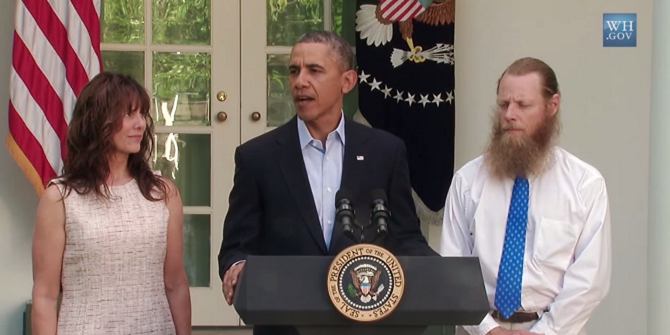