Are areas of greater environmental pollution necessarily associated with poorer and minority communities? While this is undoubtedly the case in some parts of the U.S., new research from Diane Sicotte shows that this link is by no means a universal one. By examining the environmental hazards in 366 communities in Philadelphia, she finds that the 39 communities closest to the Delaware River were those with the greatest environmental burden. She argues that the location of these communities was the most important factor, not their racial or ethnic composition, nor how poor they were. She writes that the reasons for the present pattern of Philadelphia’s environmental inequality lie in the city’s near two centuries of industrial history which encouraged industrial land use on the waterfront, and that policymakers should focus on these areas for redevelopment and regeneration.

In the U.S., it is often said that “Toxic waste always rolls downhill.”  This expression paints a picture that concentrations of environmental “bads”—polluting factories and electric power plants, hazardous waste treatment plants, incinerators, trash transfer centers, and abandoned factories and hazardous waste sites—tend to be located where those at the bottom of the racial/ethnic and economic hierarchy dwell.  These are usually places where African-Americans and/or Hispanics predominate and people are poor.

But this is not necessarily the case in Philadelphia.  Here, environmentally burdened communities are unexpectedly diverse in racial composition and social class status.  In 2001, the Pennsylvania Department of Environmental Protection defined “environmental justice areas” as places where 30 percent or more are members of a racial/ethnic minority group and 20 percent or more live at or below the poverty level. This definition would probably work well to identify communities with many environmental hazards in Los Angeles or Phoenix.  But Philadelphia is a “rustbelt” city that industrialized early in its history; this early industrial development caused a more complex pattern of environmental inequality than is found in West Coast cities.

In recent research, I explored the location of environmental hazards in 366 communities in Philadelphia, the four counties bordering it on the New Jersey side of the Delaware River, and the four counties bordering it on the Pennsylvania side.  Previously I mapped 13 different types of environmental hazards (including all those mentioned above plus large sewer treatment plants, landfills and illegally dumped piles of car tires) onto maps of all boroughs, cities and towns in the eight counties surrounding Philadelphia.  I divided the City of Philadelphia into its twelve Planning Analysis Areas.  After counting the hazardous sites or facilities in each community, I discovered that just 39 of the 366 communities shown in Figure 1 below, had more environmental hazards than 90 percent of all communities, and thus were defined as “extensively burdened” communities. 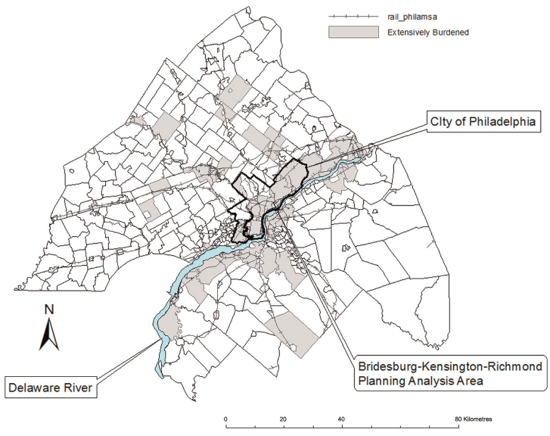 I used data from the 2000 Census to determine the racial/ethnic composition of each place and its social class status, and how these (plus location) affected each community’s risk of being extensively burdened with environmental hazards. I wanted to answer two questions:  were there “tipping points” for environmental burdening—points at which increasing minority population or increasing poverty increased the risk for burdening?  And how did location, social class status and minority status together create tipping points for burdening?

Poverty (characterized by median household incomes of $43,727 or below), presented a good threshold of risk for burdening.  Only disadvantaged communities faced higher risk for extensive burdening (4.68 times average); the risk was not significantly different from average for lower middle class, middle class, or upper middle class communities.  Not surprisingly, no affluent communities were among those burdened.

But the location of the community was one of the most important factors pushing risk higher or lower.  Location bordering the Delaware River was the most significant risk factor for extensive environmental burdening—by itself, it boosted risk for burdening to 8.40 times average.

The reasons for this complex pattern of environmental inequality are rooted in Philadelphia’s long industrial history, which began before 1820.  Before railroads or electricity existed, the river served as the only source of power for factories, the cheapest shipping route, and a convenient place to dump waste.  This early land use set a precedent for industrial land use along the waterfront that has continued on to the present; this precedent is the reason communities bordering the Delaware River face such a high risk for environmental burdening.

By 1850, Philadelphia had a large and very diverse manufacturing economy, producing leather, carpets, chemicals, gasoline, iron and steel, locomotives, machinery and clothing.  This industrial boom demanded an ever-expanding workforce, and skilled immigrants from England, Germany and Poland flocked to the U.S. to staff Philadelphia’s factories.  These white immigrants were hired in preference over the free African-Americans who lived in Philadelphia.  This led to the creation of many white, segregated industrial neighborhoods where narrow brick houses were built close to factories, placing working-class urban whites at risk for environmental pollution and burdening.  Many of these industrial communities—such as the Bridesburg and Port Richmond neighborhoods in Philadelphia—are still predominantly white.

Those who owned the factories also lived in predominantly white communities, but further out in the segregated suburbs where their homes were located far away from the smoke and noise of manufacturing.  The location of the whitest, most affluent communities in these outer-ring suburbs is the reason for their low risk for environmental burdening.

The manufacturing boom in Philadelphia began to wane in the mid-1960s, when factories began to leave the area around the Delaware River for suburban locations outside the city.  By the 1980s, jobs in manufacturing were much harder to find and some industrial communities had suffered “white flight” to the suburbs, transforming them to poor, predominantly minority places (such as Chester, PA and Camden, NJ).  Although fewer manufacturing businesses remain, land remains zoned for industrial use and waste-disposal businesses have been added, burdening industrial communities with both types of hazard.

Remediation and redevelopment along the Delaware River waterfront has been largely confined to a few large tourist attractions completely severed from their impoverished host communities, which remain environmentally burdened.   Compared with other cities, Philadelphia has redeveloped little of its industrial waterfront, largely due to the presence of Brownfields and waste disposal facilities along its waterfront.

Instead of focusing on race and class thresholds as defining characteristics of environmentally burdened communities, policymakers should focus instead on the concentrations of hazardous and polluting land uses that have been allowed to accumulate along the waterfront.  These concentrations make it more difficult to change the zoning of parcels of land, keeping out needed commercial, recreational and residential land uses that could revitalize these diverse waterfront communities.

This article is based on the paper ‘Diversity and Intersectionality among Environmentally Burdened Communities in Philadelphia MSA, USA’ in Urban Studies.