When it comes to the question of social welfare many people think of the United States and Scandinavia as two opposites. A widespread perception is that Americans hold highly skeptical opinions about social welfare while Scandinavians are particularly charitable and more willing to help fellow citizens. However, Americans and Scandinavians are not so different at all when it comes to attitudes on social welfare. It is not because of fundamental psychological differences between Americans and Danes that the social models of the countries are so different.

This is one of the key conclusions from our recent research, based on large scale survey experiments conducted in the United States and Denmark to investigate the psychology of social welfare opinions. In the experiments, American and Danish participants were randomly presented with one of three cases describing an individual on social welfare:

Nationally representative samples of Americans and Danes (about 1000 respondents from each country) took part in the study. All respondents were randomly assigned to read one of the three descriptions. Subsequently they were all asked their opinion on whether the eligibility requirements for social welfare should be made stricter for people like the man they had read about.

As Figure 1 shows, when it comes to the first case in which no contextual information was provided about the situation of the social welfare recipients and the effort he was making to find a new job,Americans were more skeptical of granting social welfare than the Danes. Likewise Americans were more likely to associate social welfare with laziness while Danes were more likely to see social welfare recipients as unlucky people who have been victim of bad circumstances beyond their own control. However, when presented to cases 2 and 3, Americans and Danes agree on social welfare and the effects of these preexisting stereotypes were crowded out. Specifically, Americans and Danes alike wish to help the unlucky person who is motivated to find a job but is out of work because of bad circumstances outside his own control. And in both countries people react strongly against the lazy person who is not motivated to try to find a job.

Figure 1 – Opposition to Social Welfare by Statement and Country 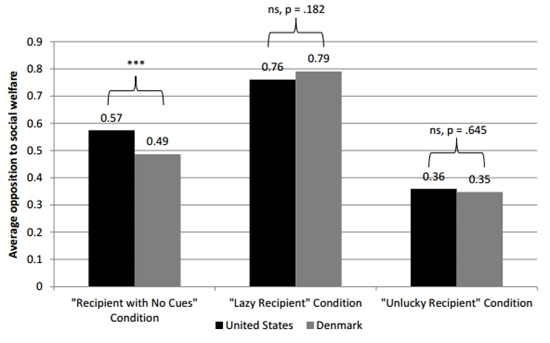 These new results tell us that support for social welfare is not driven by fundamental psychological differences between Danes and Americans.  One likely explanation for this is rooted in our species’ evolutionary past. Throughout human evolutionary history individuals have had to make decisions about whether to share resources with others. In these contexts, adaptive sharing has entailed that our ancestors shared with those that would return the favor if needs were reversed. In other words, we evolved to base help-giving decisions on expectations of reciprocity. We are unwilling to help if we believe that people will not reciprocate but are trying to cheat us.

When modern individuals – Americans and Danes alike – form opinions on who deserves welfare in mass society, they do so using the same psychology that has guided help-giving decisions for millenniums: they watch out for cheaters and seek to help reciprocators.  The key question guiding our intuitions about recipient deservingness is: Is this a person who is motivated to give something back to me and society? These psychological systems designed for cheater-detection and decision-making about reciprocity crowd out cultural learning and a lifetime of exposure to different welfare state cultures. Therefore, when provided with direct information about the motivation and the circumstances of the social welfare recipients, just two sentences of information can make Danes and American become substantially and statistically indistinguishable in their social welfare opinions.

This article is based on the paper, ”Crowding Out Culture: Scandinavians and Americans Agree on Social Welfare in the Face of Deservingness Cues”, in the Journal of Politics.

Lene Aarøe – Aarhus University, Denmark
Lene Aarøe is an Assistant Professor at the Department of Political Science and Government, Aarhus University. Her field of research is political psychology. A key motivation in her work is to investigate how the psychological imprints of ancestral living in hunter-gatherer groups shape political attitudes and communication effects in modern mass democracies. Her academic affiliations include the Interacting Minds Centre at Aarhus University. Together with Michael Bang Petersen, she co-directs The Politics and Evolution Lab.

Michael Bang Petersen – Aarhus University, Denmark
Michael Bang Petersen is a Professor at the Department of Political Science and Government, Aarhus University. His primary research focuses on how human evolutionary history influences the way people reason about modern mass politics. Specific topics he has published on include attitudes about social welfare, immigration, redistribution, criminal justice and political parties. His academic affiliations include the Center for Evolutionary Psychology at UCSB and the Interacting Minds Centre at Aarhus University. Together with Lene Aarøe, he co-directs The Politics and Evolution Lab.